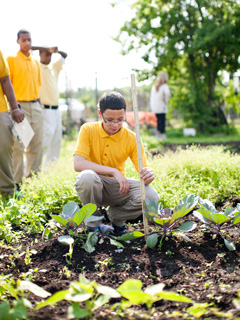 story by liz pacheco | photos by emily wrenThey call themselves the Southwest Child Rebel Gardeners. They’re a group of students from George W. Pepper Middle School in Southwest Philadelphia, and their stomping ground is the Pepper Pride Garden.

Pepper hardly looks like a city school. The building is surrounded by large expanses of grass, accessible via its own service road. In late May, the garden’s collection of fruit trees, raised beds and plotted rows was showing early signs of a summer bounty. Lettuce, kale and collards were abundant, and the students were eyeing their strawberry plants with impatient longing.

While middle school gardeners may seem unusual, particularly those who consider themselves “rebels,” more unique is their relationship with nearby Eastwick Common Grounds Community Garden. To call the space a community garden seems an understatement. The largest community garden in Philadelphia, this nearly 10-acre space, with views of a runway and I-95, yields close to 400,000 pounds of produce annually. The maze of plots, separated by fences and dotted with ramshackle sheds and greenhouses, creates a wild, natural oasis in an otherwise concrete expanse.

Common Grounds has been in Eastwick for more than 30 years, leasing space from the city’s Redevelopment Authority at Bartram and Island Avenues, walking distance from Pepper and just minutes from the Philadelphia International Airport. But in 2008, the long-term lease expired, the land was sold to the Airport, and instead, two one-year leases were issued.

The Airport, which is planning a $15 billion expansion project, considers the garden prime real estate and is unwilling to commit to a long-term lease. Despite a scare last December, the yearly lease has been renewed. However, gardeners are still on edge, worried their space could be taken at a moment’s notice.

In anticipation of a potential change in Common Grounds’ status, Michael Nairn, a University of Pennsylvania urban studies professor who completed a study of Philadelphia community gardens in 2008, asked Pepper for garden space. He talked with Jarrett Stein, a recent Penn graduate in his second year at Pepper. Stein is working as the school’s Nutrition Education Corrdanator through  the Urban Nutrition Initiative, part of Penn’s Netter Center for Community Partnerships.

“Rather than using the angle for [Eastwick as] just producing food,” said Nairn, we wanted to “build more support by getting the kids interested.”

So, Stein and Nairn decided to bring the eighth grade boys to Eastwick Common Grounds. Their first visit was fall 2010.

“It was a complete experiment,” said Stein of their first trip to Common Grounds. The weather was rainy and damp, and any incentives an outside field trip brings were missing. But the trip became what Stein now calls his “favorite teaching day.”

Katie Haywood, the Girls Dean, eighth-grade science teacher at Pepper and faculty adviser on visits, agreed, admitting she was surprised by the enthusiasm and interest students expressed during that first visit and those following.

“In the beginning, I thought it would be boring, something for girls only,” said eighth grader Ashanti Erwin. “But now I love [gardening]. I have this for the rest of my life.”

The trips to Eastwick Common Grounds are primarily observational, but entirely interactive. Stein and Haywood essentially let the 25 or so students loose in the maze of greenery with a garden-related task.
During a trip in late May, the students were in small groups and asked to measure plants in three different plots. The next week, the students would return to remeasure and note the growth. The students were also given a digital still or video camera to document their work. Some groups were asked to film what Stein calls “an MTV Cribs episode.” Similar to the reality show counterpart, students ask a gardener for a tour of his or her plot.

Making these episodes is fun and an easy way for Stein and the students to connect. “Throughout the two years, the biggest worry I’ve had is about the cultural differences,” said Stein. Activities like “MTV Cribs” help. “They want to be celebrities, and [the Cribs episodes] are more effective than a paper on a clipboard.”

Stein also stressed peer education as an essential way to keep students focused. All tasks at Common Grounds have the students working with each other as well as the gardeners. The Eastwick gardeners have a diversity of backgrounds. Many are first-generation immigrants from places such as Italy, Laos and China.

“Because of the relationship with us and Pepper, we’re willing to help the kids, teach them about gardening,” said Butch Thomas, president of Common Grounds. “They want to learn and we want to share that information. As [the students] get older, they will become gardeners and know what to do.”
The students are respectful, but inquisitive during their visits, asking about types of plants, growing methods and favorite recipes. The students take these lessons (and often gifted plant clippings) back to Pepper Pride.

Before Stein, Pepper had a small garden as part of the Urban Nutrition Initiative. The Initiative also ran a cooking club and free assemblies on healthy eating, and taught students through the nutrition outreach program EAT.RIGHT.NOW. Stein has continued that programming, at Pepper, as well as Shaw Middle School in West Philadelphia and Vare Junior High School in Southwest Philadelphia. 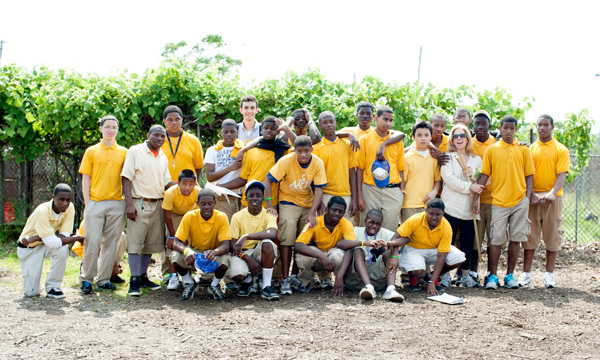 “At Shaw, I’m only allowed to teach with certain teachers,” said Stein. “At Pepper, I have more freedom. I can work with whoever I want.” Cooperation from Pepper principal Yolanda Armstrong and the faculty has made the Pepper garden program possible.

“Pretty much whatever Jarrett comes to me and says he wants to do [happens],” said Armstrong, who’s been principal for six years. “We’re trying to make this something special, not just for our children, but so that they can take that knowledge and transfer it to their home life. It’s another piece of the educational process.”

For Stein, the garden is important to teaching healthy eating habits. The idea is “to make eating good food and growing your own food cool,” he said.

This summer, nine Pepper graduates have been hired to tend Pepper Pride and sell its produce at the Clark Park Farmers Market and Mercy Eastwick Health Center. They’re also selling hand-painted flower pots and carrying a petition to save the Eastwick garden.

Back at Pepper, there are plans to add a shed, more raised boxes and create a website (the just-launched rebelgardeners.org) with recipes and “how-to” videos. In the future, Stein hopes to bring more classes, particularly of girls, to Eastwick.

“This whole thing has evolved, and it will continue to evolve. We continue to talk about the next step,” said Armstrong. “It’s not just a value for Pepper and the Pepper community; it’s for the overall community.”

Carex for Every Garden (Online)

Before he returned home to convert his parents’ old bucks county horse barn into a winery,