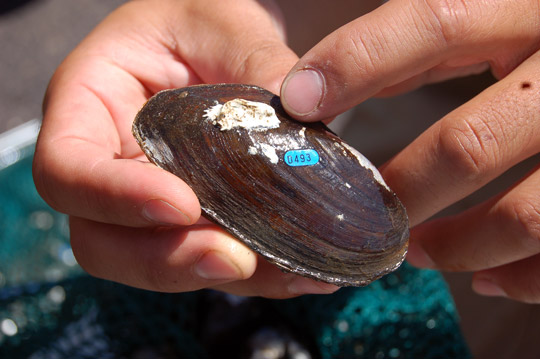 The lack of mussels in the Tacony-Frankford Creek made the stream a desirable target for the reintroduction of the hardy Elliptio complanata species. | Photos by Brian Rademaekers

When you think of mussels in Philadelphia, your first thought might be of ordering moules-frites, Belgium’s signature dish, from Monk’s Café. Ecologist Danielle Kreeger and a team of volunteers is trying to add another association. They want you to think of the Tacony-Frankford Creek, whose swampy terminus is at the Delaware River in Northeast Philadelphia, where the once plentiful mussel is being reintroduced.

In late August, Kreeger and her helpers took coolers with 50 mussels, scrubbed clean and fitted with tiny radio transmitters, to the creek. Carefully selecting spots along the streambed where they’ll be able to weather storm surges, Kreeger, a scientist working for the nonprofit Partnership for the Delaware Estuary (PDE), and her team gently placed them in small clusters. A GPS location and basic water quality data were recorded at each new mussel bed. The mussels will be monitored periodically. If the mussels survive, Kreeger and others will measure shell growth to determine how healthy the new beds are.

Kreeger is clearly an enthusiast—she uses words like “sexy” when talking about their lifecycle—but there are very practical reasons for hoping the mussels are here to stay. They possess a natural power to filtrate water and stabilize stream bottoms, making local waterways healthier both ecologically and as a source for drinking water. 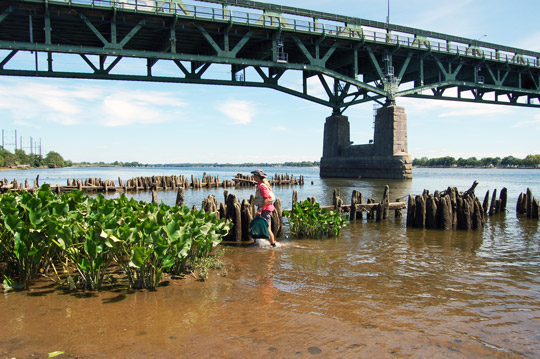 The lack of mussels in the Tacony-Frankford Creek made the stream a desirable target for the reintroduction of the hardy Elliptio complanata species, Kreeger says. She and her staff harvested the mussels from a massive bed in “a secret location” along the Delaware. Kreeger discovered the bed of approximately 4 million mussels in 2009, and documented seven different species living there, including two that were thought to have vanished from Pennsylvania waters. Federal regulations bar researchers from publicizing the locations of such mussel beds, and Kreeger says there are real threats from shell collectors and poachers looking for fishing bait.

Although there is much historical evidence to suggest that mussles thrived in these waters, previous documentation on the Tacony is limited to a survey conducted in 1919. Standing on the bank of the creek just off of Rising Sun Avenue with a dripping bag of mussels, Kreeger contemplated how profound that data gap is when trying to figure the new arrivals’ historical context. 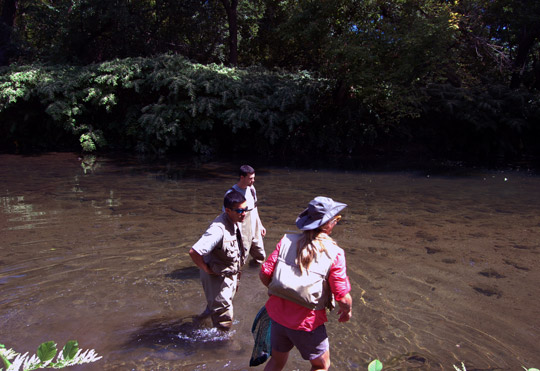 While the timeline of the stream’s mussel loss remains a mystery, likely culprits in their disappearance are myriad, and mostly fall under the umbrella of what Kreeger calls “habitat degradation.” Dams are especially harmful for freshwater mussels due to the impact on their complex mating needs. Unlike the marine mussels coveted by restaurants, freshwater species depend on a specific host fish to carry their young upstream. Without the help of fish, the mussels can’t move beyond already established beds, and inbred populations become genetically vulnerable. For the mussels seeded along the Tacony Creek in August, the host fish happens to be the American eel.

“However they do it, these mussels have developed a sense where they can say, ‘Oh, that’s an eel; I’m going to spit my babies out at an eel.’ We don’t know how they can sense it. But an Alewife Floater, one of the species we have in the region, needs an alewife [a shad cousin]. The Eastern Pearlshell needs a brook trout. They can’t use another fish, and we don’t really understand anything about that. We don’t even know for some of our native freshwater mussel species what the host fish are,” says Kreeger. For her, mysteries like this make freshwater mussels a thrilling species to study. 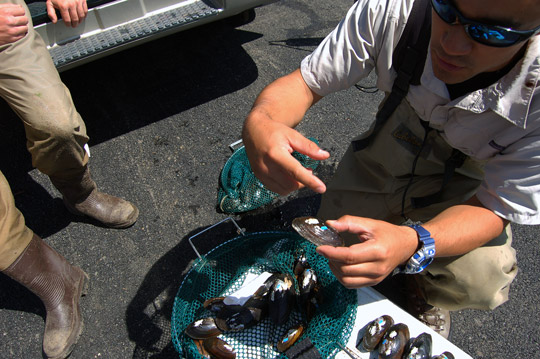 With some 300 freshwater species in North America, 75 percent of which Kreeger describes as imperiled, there’s plenty of work to be done. “There’s a lot of cool things about these guys that we don’t know about, things that are just starting to be discovered,” says Kreeger. “For example, there’s no cell malignancy in a freshwater mussel. So, just for cancer research, we’d hate to lose some of these species that might help us solve some of the riddles with that disease. They also filter pathogens like giardia and salmonella and keep our water clean.”

Kreeger believes that, as more is understood about freshwater mussels, their ability to improve water sources will make them an important part of conservation efforts. “Every one of these mussels is going to filter about 10 gallons of water every day during the summer, and collectively, a healthy bed of mussels functions like a water treatment plant,” she says. “Mussels beds can be 50 to 100 years old, so when you rebuild a mussel bed—hopefully in Tacony—they’re going to do that good work for our water for decades.” Already, Kreeger noted, the Philadelphia Water Department has expressed interest in mussel beds for their role in water filtration, and played a role in conducting mussel surveys on local waterways. 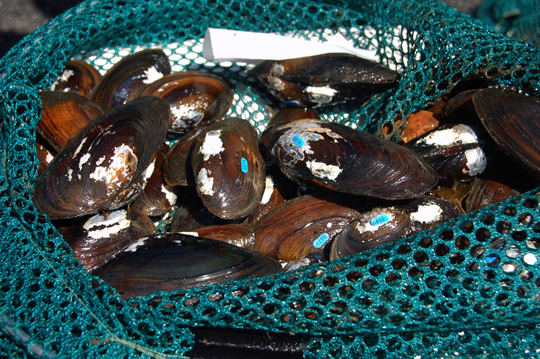 “We’re looking at using mussels in habitat restoration along the tidal Delaware and tidal tributaries,” adds Lance Butler, a biologist with the Philadelphia Water Department. “Another place we’re exploring the role of mussels is in wastewater wetlands, because if you have active mussels there to help process the water even more, obviously the water coming out into the Delaware is going to be even cleaner.”

From the perspective of the Tookany/Tacony-Frankford Watershed Partnership, the long-running survey and restoration project has been a rich opportunity to engage and educate residents—one of the primary functions of the nonprofit group, which receives funding from the city and other municipalities. That their volunteers could help to bring back a once-vital species is especially exciting, says Executive Director Julie Slavet.

“It’s an opportunity to talk to residents about the tools that are out there to clean the creek,” says Slavet. “You go out there with the goal of surveying mussels, but you also get to talk to people about things like the biggest source of pollution being runoff, and that we have to worry about sediment … it’s just another way to open up and engage people about what’s damaging our creeks.”

This holiday season, ditch the pre-made treats and make something from the heart