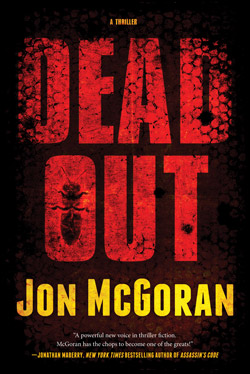 Philadelphia author educates and entertains with his latest eco-thriller, Deadout

Too often, the message of sustainability is delivered in a heavy-handed and humorless way. That’s why Jon McGoran’s delightful books with doomsday plots are so welcomed. Drift and Deadout, the first two books in a trilogy about the adventures of Doyle Carrick, a good-hearted but reckless detective, fall under the category of “eco-thriller.” At their core, the books offer the pure entertainment of a “good guys vs. bad guys” story, but McGoran manages to introduce ideas about food safety and sovereignty in a gentle way, and from the differing perspectives of fully-fleshed characters. In Deadout, released in August by Forge Books, the plot revolves around the disappearance of native honey bees, and a corporation with a genetically modified bee ready to come to the rescue. Grid caught up with our former editor in chief to discuss his latest work.

Let’s talk about the primary character of both Drift and Deadout, Doyle Carrick. Why is someone who is, at times gruff, violent and antisocial so likeable?

Well, the first reason is that it is written in the first person. You are in Doyle’s head. That goes a long way to making a character sympathetic. Doyle is a good guy, his impulses are all good and he’s funny, which I value highly.

It’s interesting to talk about the GMO (genetically modified organisms) issue through characters with different viewpoints. You get the perspectives of activists, farmers, businesspeople, and then Doyle Carrick trying to make sense of it all.

That was a cold-blooded calculation. I wanted to explore these issues, and I wanted to do it in a way that didn’t feel like a lecture and that wouldn’t feel like it was irrelevant to the plot. Doyle slowly becoming aware of these things allows the reader to just as slowly be made aware of them. Him coming at it with no established viewpoint, maybe a little skepticism, it keeps the [other characters] from getting too preachy. 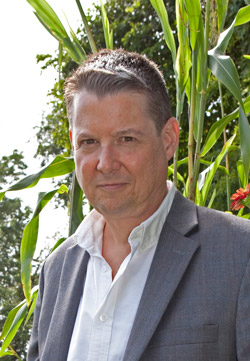 Deadout author, Jon McGoran | Photo by Stephen LadnerLet’s talk a little bit about the science of the book. In both of those books, you depict scenarios where things go terribly wrong. How much of that is a fictional device and how much of that is even a possibility?

All the technology is definitely on the table. The genetically modified bees … well, they are already releasing genetically modified mosquitoes in Brazil in order to stop certain diseases. There is stuff being done in research labs. There are goats that have human genes in them so they can produce human breast milk. There are goats with spider genes in them so they create spider silk in their milk. These are not just paranoid fantasies; this is science. So, while some of the stuff in the books has not been done yet, its definitely possible. It’s just a matter of someone applying the resources and finding the motive to do it.

How long have you been involved in the anti-GMO movement?

On some level, the whole time. I was the editor of The Shuttle at Weavers Way for 20 years. When GMOs first hit the market, we started writing about it. I wasn’t necessarily 100 percent against it, but that we should be aware of it, and no one seemed to be. So much of the information that is out there is unclear, in part because the people who are concerned about it have such strong viewpoints, and in large part because those with the biggest interest, the biggest monetary interests, are intentionally muddying the water.

It is a hot topic now. But even today, I do book events and people say, “Yeah I enjoyed the book and I didn’t know this stuff was going on.” It’s kind of stunning that there is still that level of education [that needs to be done]. It’s gratifying when someone says, “Hey, I just learned about this [issue] and I am going to find out more about it.”

As frustrating as the mixed-mode commuting experience can oftentimes be, the good news is that a

Have It Your Way

Mayor Michael Nutter participates in Bike to Work Day on May 17, 2012, an annual event