Philly’s cold-loving trees are dying out due to climate change. The city has a plan to replace them

Sometimes a forest can feel like a time machine.

A walk in the quiet, shaded woods takes you back to a world before there were crowded streets and computer screens. But in early January, as I walked through the Haddington Woods section of Cobbs Creek, I took a trip to what might be our future.

I was searching for a group of young loblolly pines. The evergreens were pretty easy to spot in the winter woods amid naked deciduous trees like red oaks and black cherries. (It helped that the trees were also labeled with their scientific name, Pinus taeda).

Loblolly pines are native to a broad swath of the American Southeast; I’m used to seeing them in Georgia or North Carolina. These particular trees were planted as an experiment, along with other Southern species, by Philadelphia Parks & Recreation (PPR) in 2015. As the climate heats up, our region will no longer be too cold for species like the loblolly pine, and they are expected to expand their range north. The thought being, if Philadelphia becomes too hot for other tree species, like white pines, could we plant these southerners to replace them? 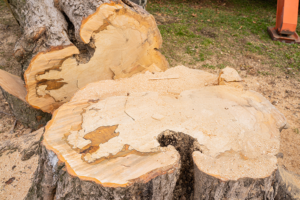 “The hypothesis is that you need to assist the migration of species into the city,” says U.S. Forest Service research ecologist Max Piana, who was involved with the plantings as a graduate student at Rutgers University and has continued to help monitor them.

Piana points out that urban trees already have to put up with hotter conditions than their rural counterparts thanks to the “heat island effect”—our local climate is a little more southern.

Climate change is already picking some winners and losers in Philadelphia.

At the end of 2021 PPR cut down an ailing sugar maple tree on the Belmont Plateau in Fairmount Park. After decades of shading picnics and framing scenic pictures of the park, the tree was at risk of losing a limb or coming down completely, an intolerable safety hazard at such a heavily visited spot. After consulting with local tree experts, Lori Hayes, director of urban forestry for PPR, has chosen to replace the tree with a trio of black gum trees (aka sour gum, or tupelo).

The hypothesis is that you need to assist the migration of species into the city.”

“They have a lot of color in the fall, not a lot of messy fruit,” she says.

Sugar maples are on the way out in Philadelphia. We sit on the southern edge of their range as it is, and the trees, which do best where winter snow covers the ground above their roots, are finding our warming climate less and less welcoming. Black gums, by contrast, thrive all the way down into Florida.

The Forest Service has been helping urban foresters answer that question by estimating vulnerability of common species to likely future conditions—not just temperature shifts, but also changes in other factors such as precipitation and pests.

Leslie Brandt, a climate change specialist with the Forest Service’s Northern Institute of Applied Climate Science, says that some trees like hackberry, American holly, black gum and American persimmon could be expected to fare well, while others, such as American beech, white pine and eastern hemlock, could be expected to have more trouble surviving in Philadelphia.

This kind of modeling is proving useful in Philadelphia, according to Max Blaustein, who runs PPR’s Greenland Nursery, which uses local seeds to produce plants for ecological restoration work.

“Most of the projections for our area that I’ve seen show many of our most important tree species to fortunately remain viable,” Blaustein says. “This includes many of the oak and hickory species common within our plant communities. There are also a handful of species whose current range is mostly south of us that we are looking to increase our use of.”

Blaustein says he is also sourcing seeds for native tree species from populations to our south, where they might be adapted to warmer conditions. How much this matters is uncertain.

It could be that trees grown from our local seeds might be flexible—or “plastic,” to use the scientific term—enough to deal with a warming climate.

“The question is, within a Philadelphia acorn is there enough plasticity to withstand climate change? Or are acorns collected from, say, Nashville, more adapted?” Piana says.

Philadelphia will begin taking part in an experiment with Baltimore, New York City and the Hartford–Springfield, Connecticut, area to answer that question in 2022. Each site will plant white oak and chestnut oak acorns from all four areas to see whether the Baltimore acorns grow better in a warming Philadelphia than those from Connecticut, for example.

It will take decades for scientists to study these experimental plantings, but that is still the blink of an eye for our longest-lived forest trees. A sugar maple can live longer than 300 years, a white oak 500 years and black gums have been found to live longer than 600 years.

Climate forecasts of 50 or 100 years out can seem distant to humans, but for our trees it’s time to get started.

Black-owned bookstores have been activism epicenters since the 19th century. These local shops continue to carry the torch

Black-owned bookstores have been activism epicenters since the 19th century. These local shops continue to carry the torch

The FBI kept Hakim’s Bookstore, 210 S. 52nd Street, under surveillance for some time, sniffing around

Community garden advocates say it is within the city’s reach to save neighborhood spaces set up on abandoned, bank-liened land

Before the chic boutiques and overpriced cafés arrive, the first sign of gentrification is often a

Pennsylvania “locks up a higher percentage of its people than almost any democracy on earth,” states

In colonial Jamaica a group of enslaved women were bathing in the nude, washing clothes and