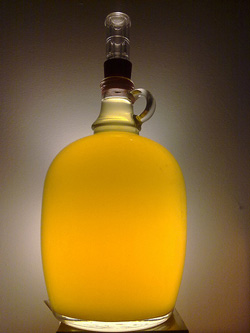 The fermented love child of honey, water and yeast, mead has been charming the palates of drinkers since the dawn of time (well, not technically, but 2000 B.C. is pretty close). And it’s having a bit of a moment in this millennium, too. For the DIY-inclined, mead is a popular homebrew project. Nancy Rigberg, co-owner of Home Sweet Homebrew, says the greatest challenge to crafting flavorful mead is to be patient.

Many meads reach their prime after years of bottle-aging,” she says. “Young meads will often be harsh, but evolve into an almost ethereal experience after five or even 10 years.”

Mead became legal to brew in Pennsylvania in 2004, when the definition of legitimate wine ingredients changed to include honey. Sheree Krasley, co-owner of Stonekeep Meadery in Boyertown, estimates that there are now a dozen wineries in the state making mead. There has also been an upsurge in interest among drinkers, she’s observed, due to a few factors: history buffs wanting to recreate a taste of the past; the popularity of such television shows as HBO’s Game of Thrones, where characters frequently imbibe the stuff; and the craft-beer boom, which is inspiring people to try different and unusual beverages.

“Mead used to be the poor stepchild to wine,” she says, “and now it’s kind of cool.”

Chicken Out: A can’t-miss pop-up at Café Lift for local food lovers