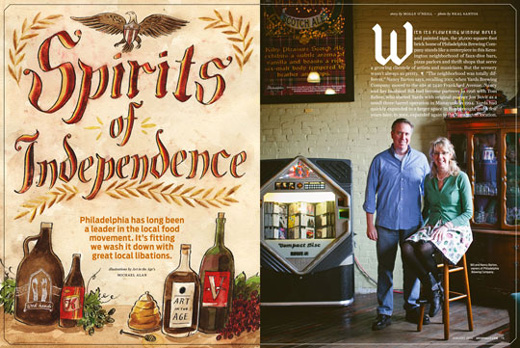 With its flowering window boxes and painted sign, the 38,000-square-foot brick home of Philadelphia Brewing Company stands like a centerpiece in this Kensington neighborhood of faux-dive bars, pizza parlors and thrift shops that serve a growing clientele of artists and musicians. But the scenery wasn’t always so pretty.

“The neighborhood was totally different,” Nancy Barton says, recalling 2001, when Yards Brewing Company moved to the site at 2440 Frankford Avenue. Nancy and her husband Bill had become partners in 1998 with Tom Kehoe, who started Yards with original partner Jon Bovit as a small three-barrel operation in Manayunk in 1994. Yards had quickly expanded to a larger space in Roxborough, and a few years later, in 2001, expanded again to the Kensington location.

“It was a little sketchy,” she says. “People thought we were crazy.” Drug dealers worked openly on corners and the vacant lot across the street gathered waist-high trash. But the company put down roots and the community began to grow around it.

The partners parted ways in 2007. Kehoe moved Yards to a facility on Delaware Avenue. But the Bartons stayed put, and Philadelphia Brewing Company (PBC) was born. Since then, those roots have only deepened.

Everything Has a Story in Here 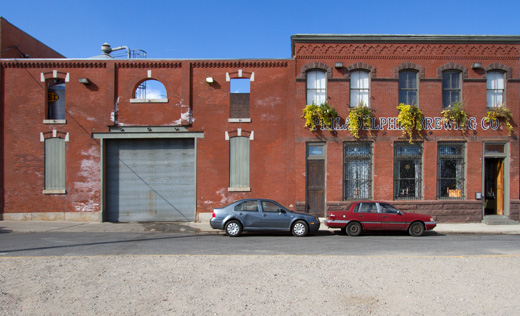 Since its construction in 1885 to house a bottling facility for the Weisbrod & Hess Oriental Brewing Company, 2440 Frankford Avenue had seen many owners. Most recently, it was home to a company that recovered equipment from defunct supermarkets and restaurants. To this day, however, the bones of the building remain unchanged but for a few select upgrades. The high-beamed ceiling holds a few lazily turning fans, the gnarled wooden floor sports a coat of varnish, and the whitewashed brick walls now house energy-efficient windows. The original barn door in the tasting room has been insulated and covered with reclaimed wood, and the Bartons installed restrooms with sinks and toilets from Port Richmond’s ReStore, an architectural salvage clearinghouse. 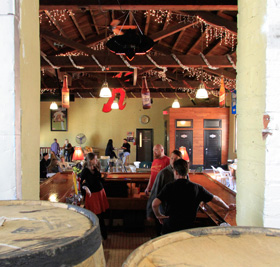 Looking into the PBC tasting room

“We did most of this ourselves,” says company graphic designer Cameron Blyth, fondly patting the shiny bar top. It is made of wood salvaged from the nearby Coral Street Arts House, which once provided low-income housing for local artists. PBC employees found supporting beams from a stable on the property, and filled in the rest with wood reclaimed from other neighboring properties. They rough-cut and milled the silky white pine, then sent it to local woodworking artist Aaron Hyman for joining.

An eclectic assortment of tables and chairs, antique display cabinets and repurposed church pews fill out the tasting room. Nancy points out each table and recalls its origin: “That was our salesperson Chris’ family table… that was my aunt’s… our friend John Longacre [founder of South Philly Tap Room] gave us that one. Everything has a story in here.” 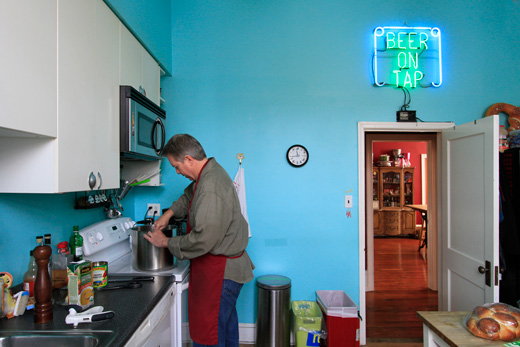 But PBC’s commitment to community goes beyond the bricks and mortar. The brewery hosts civic meetings, neighborhood groups, barbecues and an annual cleanup day. The staff joins other local businesses in a summer softball league. And they’re quick to offer a long list of other spots they love to patronize: Everybody Hits Batting Cages, Pizza Brain, Street Glitter Gallery, Atlantis: the Lost Bar, Cedar Point, Loco Pez, Johnny Brenda’s and Bottle Bar East, among others.

Colin James, who supervises packaging and operates the machine that fills beer bottles at PBC, warmly describes the community the brewery has built among its resellers by using its own trucks instead of using a distributor. “We deliver all of our product, so our relationship with the bars is pretty special,” he says. “They get excited to see us.”

That sense of community is even stronger among the staff members themselves. Half of its 26 employees live in the neighborhood, and three-quarters within the city. Blyth has walked to work from her home in Kensington nearly every day for the past four years. During the week, she prepares and prints signage in-house, but on Saturdays, she’s behind the bar in the tasting room, chatting with tour guests.

“I think I was asked to be in a band with our logistics guy, Paul, within 10 minutes of my first day,” James says. “It can be a real love fest here.” The love is genuine. Every day, Bill cooks lunch for the staff, and they eat together in the tasting room.

“I’ve never worked anywhere that fed me every day,” Blyth says. “It’s made for us with thought and consideration for dietary wishes.” The lunchtime ritual is special for the employees. “It adheres our guys together whether they know it or not,” James says. “Conversation is good during a bad or good day. It’s always important to keep a good morale, and I think the fact that we eat together makes us seriously like a family.” 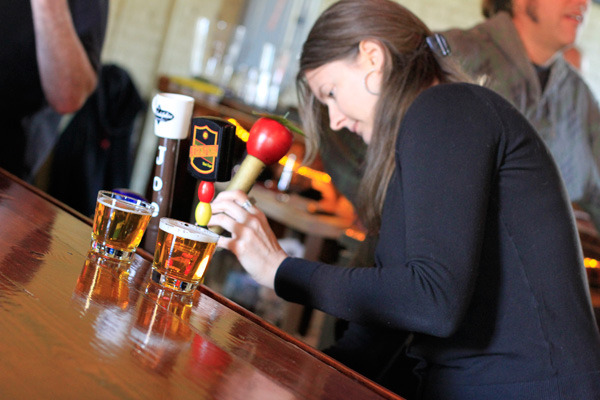 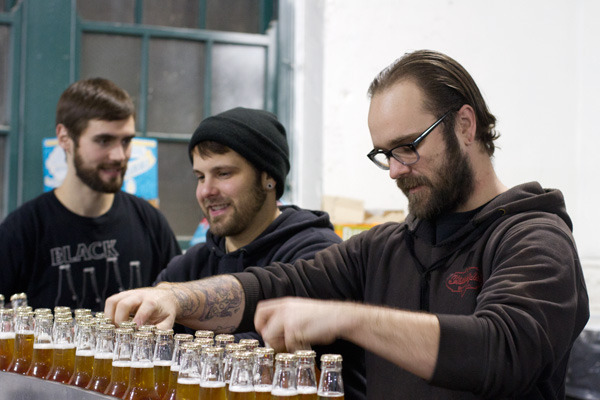 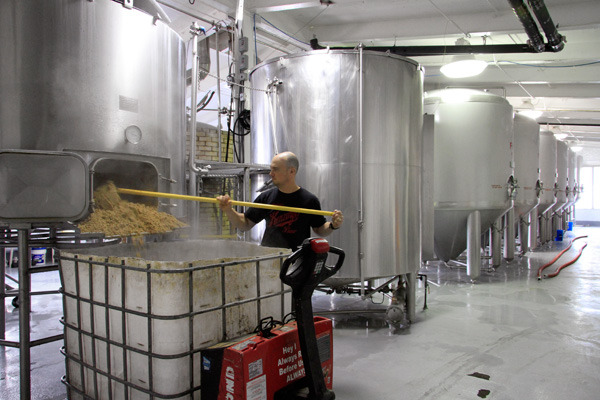 That sense of community extends to the food itself: all locally grown produce and sustainably sourced dairy from nearby Greensgrow Farms, with which PBC has a special relationship. Mary Seton Corboy, CIO of Greensgrow Philadelphia Project, recalls where it started.

“I had a feeling when PBC moved in that there was some symmetry in our lives that would play out,” she says. “I can remember the first day thinking, ‘Wow, these guys are like old friends.’ And we hadn’t even had a beer yet!”

Greensgrow now grows much of the hops used in PBC’s Harvest From the Hood, a small-batch wet-hopped ale only available in mid-October. Other hops for the brew are grown by friends of the Bartons who are caretakers at Old Swedes Church. Still more grow right in the PBC courtyard; vines of Cascade, Willamette, Sterling, Golding and other varieties of hops climb compostable coconut strings to the second-floor window and reach across the courtyard to the Greensgrow-built window boxes on the other side.

With four year-round brews and a growing number of specialty offerings, not all of PBC’s ingredients can be procured in Philadelphia. But the majority of their Pacific Northwest and German hops are grown organically, according to Nancy, and the rest of their ingredients — grain, malt and hops — are certified non-GMO.

Impacting the Community, Not the Environment

In addition to choosing ingredients with the environment in mind, Nancy says, “We have a pretty intense program as far as recycling and composting.” After fermentation, spent grain is donated to Walter B. Saul High School of Agricultural Sciences, where it’s used as livestock feed. Philly Compost picks up food waste, coffee grounds and yeast from the brewery. Used glass goes to Blue Mountain Recycling for processing, and cardboard and plastics are recycled separately. A recent audit showed that PBC is very close to achieving zero waste status.

“I thought I was into recycling and did my part until I started here,” James says. “We literally don’t waste anything. It is all recycled, from spent bottle caps to the empty jars of spaghetti sauce.”

PBC also uses energy-efficient light bulbs wired to motion sensors, so lights go off automatically when they’re not in use. And, Nancy says, PBC has just signed on with an alternative-energy company that uses both solar and wind power.

Although PBC is part of the Sustainable Business Network and works daily to maintain its low environmental impact, Nancy says, “We don’t think about it a whole lot. I think when you’re in it, you don’t even notice what you’re doing.”

Kensington today is the site of a quiet cultural revolution. Community gardens are replacing vacant lots. Abandoned warehouses are seeing new life, transformed into studios and workspaces by painters, sculptors and glassblowers.

“I don’t think it was our intention to change the neighborhood,” Nancy says. “But I’m glad we were here to help.”

Corboy sees it a little differently. “It’s as if we were meant to be here in the ’hood together,” she says. “Yeah, we’re always snickering and goofing on everybody in the neighborhood, but always working to make this place what we saw 20 years ago that it could become… more than the butt of a joke. Other people maybe come and go. PBC and Greensgrow just keep growing up side by side every year [like] those hops plants coming back clinging to that little string, trying to reach the sun.”