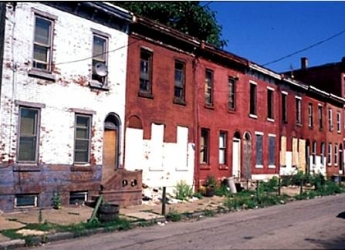 Vacant land in South Philadelphia | Image via planphilly.comPhiladelphia City Council unanimously passed a bill to establish a public land bank at their final meeting before the holiday recess, held Dec. 12 at City Hall. As stated in a press release from the Philadelphia Land Bank Alliance by bill sponsor Councilwoman María Quiñones Sánchez, “This Land Bank will finally give Philadelphia the tools we need to reclaim our neighborhoods from blight, abandonment, and tax delinquency, and to get properties back into productive reuse.”

The bill, proposed in March of this year by Sánchez, underwent significant changes in the last few weeks at the prompting of Council President Darrell Clarke. Clarke initially pledged support for Sánchez’s version of the bill, but expressed concerns over the lack of Council oversight to the purchasing and disbursement processes, much to the surprise and dismay to land bank champions. The Council President proposed several significant amendments to the bill after it was voted out of committee and after the period of public testimony had concluded in late October.

Among the amendments, the most contentious was the addition of another step in the approval process for acquisition of properties by the land bank, as well as the approval of sales, requiring approval by Councilmembers and the Council President, through the maintenance of an existing agency known as the Vacant Property Review Committee (VPRC). The VPRC’s responsibilities would have essentially been transferred to the Land Bank Board under Sánchez’s bill, making the agency no longer subject to the appointments and swaying positions of each mayoral administration, and with more transparency and public accessibility. At a Dec. 5 council meeting, Clarke and a group of community leaders referred to as his “Legislative Response Team,” argued that the additional Council oversight ensured the process experienced appropriate checks and balances.

The amendments were approved at a council meeting on Dec. 5, after an agreement was reached between Clarke and Sánchez that rested on the condition that the reconstitution of the VPRC in the bill would meet higher standards of public transparency and accessibility, and would not detract from the efficiency of approvals.

With the bill’s passing, Philadelphia becomes the largest city in the country to establish a land bank. Despite concerns about Clarke’s amendments, the approval of the land bank is a big step forward in the City’s efforts to fix the process of disbursing vacant land to development projects that will benefit communities and prevent further tax delinquencies.

It is no small concern for the City that there are more than 40,000 properties that currently sit vacant, affecting crime rates and property values in communities with few avenues for recourse against absentee property owners. The process to transfer vacant properties to new buyers currently takes upward of two or three years. Councilwoman Sánchez, despite the additional review processes codified by Clarke’s amendments, remains dedicated to streamlining the process under the guidance of the land bank to as little as nine months.

The passage of the bill is just the first step, as organization, staffing and funding for the Land Bank Board is yet to be settled. Council President Clarke commented, “Now comes the difficult work of reorganizing an aging, ineffective bureaucracy and ensuring it has adequate resources and qualified staff. It is my hope that Mayor Nutter puts the full weight and might of his Administration behind this great and difficult task.”