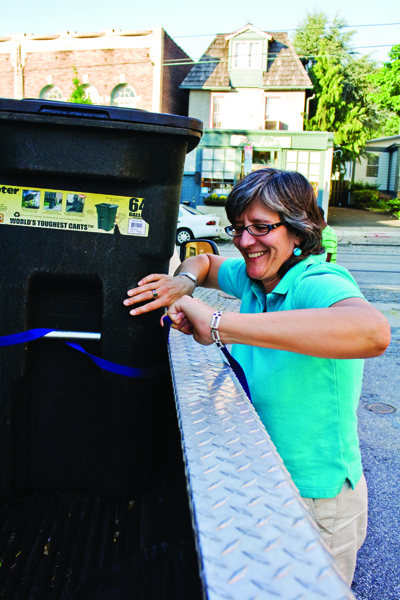 There is one word showing up left and right on the lips of top urban sustainability and food access experts: compost. To hear them speak of it, the stuff is magic—now it’s just a matter of getting the rest of society on board. Philly Compost, a year-old company based in Northwest Philadelphia, is doing their part to bring the city’s businesses into the fold.

Philly Compost was founded by Lee Meinicke and Meenal Raval. A longtime recycling advocate, Raval had been a backyard composter for years, while Meinicke was getting her MBA in sustainable business. “I started talking to people about what sorts of recycling, reuse, manufacturing-type businesses were missing from the landscape,” she says. “Composting came up several times. This is not anything I ever really set out to do, but I’ve become incredibly passionate about it.”

In Philadelphia, businesses don’t qualify for city waste disposal services. For restaurants and institutions, a large portion of their output is foodstuffs. “If we take their food waste, it can save them a little bit of money,” explains Meinicke. “If we take the wet stuff out of their garbage stream, their weight goes down, and they can have their waste service pick up less frequently, because it’s not as stinky or heavy.”

Meinicke met Michael Bryan-Brown, owner of Green Mountain Technologies, when she was in graduate school. Philly Composting eventually purchased Green Mountain’s Earth Tub, a fully-enclosed 4-foot tall, 7.5-foot wide composting vessel featuring power mixing and aeration. Meinicke became so enamored with this hyper-efficient composting tool that she became the company’s regional sales rep. Bryan-Brown recently came east on a business trip, and was thrilled with Philly Composting’s operation. “He was so excited,” recalls Meinicke. “He said, ‘This is really the kind of application that many of us dreamed of—it’s local, small-scale composting.’”

When Philly Compost launched, they were based out of a facility in Germantown, but quickly found that the high rent wasn’t feasible for a business with such slim profit margins. They went looking for a partner, and are now in the process of moving their operations to the Schuylkill Center for Environmental Education. (During the transition, they’ve been hauling their materials to composter extraordinaire Ned Foley at Two Particular Acres.) Not only does the Schuylkill Center have tremendous volunteer resources, it’s also home to Urban Girls Farm, creating a closed-resource-loop bonanza.

Philly Compost are doing all they can to foster the composting movement, even if it does nothing for their bottom line. On their website, they’ve compiled a Google Map showing private and public composting sites. They encourage residents to open their backyards—and their compost piles—to neighbors. They have also approached the Pennsylvania Horticultural Society about offering “Master Composter” classes.

This all goes to show that this is more than a business to Raval and Meinicke. In addition to improving Philadelphia’s soil, they think composting can have a broader influence. “Composting as locally as possible has a tremendous impact on climate change,” explains Meinicke. “If you throw your food waste in the garbage, it goes to a landfill where it breaks down, generating methane—a greenhouse gas. You also have a huge trucking impact, hauling stuff to a landfill that’s 30, 40, 50 miles away from where you cut up your celery. So, when you combine those two things together, this really has a huge impact.”

For information, visit phillycompost.com.
And keep an eye out for “We Compost With Philly Compost” stickers at local businesses.

Along for the Ride: Via Bicycles’ Curtis Anthony