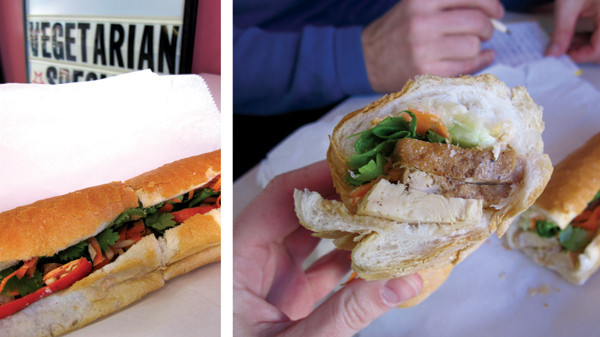 Soy Dream: A sandwich from Nhu Y (left) used mayo and firm tofu to separate itself from O’s take on the vegetarian treat (right), served on house-baked bread.
by Bernard Brown | photos by Lee StabertI should start this piece by disclosing some bias: I have Fu-Wah’s number saved in my cell phone. I use it for ordering takeout tofu hoagies—the timing is perfect if I dial right as I’m leaving my apartment. I have eaten at least a hundred from the beloved corner market in West Philly, and loved every one of them.

Even non-vegetarians admit they’re something special, though most note that the tofu hoagie isn’t actually a “hoagie,” per se. The roll is a hoagie roll, but the fillings are far from shredded iceberg and sharp provolone—richly sauced chunks of fried and long-simmered tofu are paired with cilantro, pickled carrots and daikon, slices of fresh jalapeño and garlicky chili sauce.

I recently discovered that the tofu hoagie—something I had long considered a special neighborhood claim to fame—is actually an adaptation of a common Vietnamese sandwich called a bánh mì, and they are found throughout the city. Of course, I had to try them.

The bánh mì is a child of colonialism. The French brought their baguettes (and their coffee) to Vietnam, where they were married with local ingredients and the Southeast Asian passion for the confluence of sweet, salty, spicy and sour. Non-vegetarian versions can feature everything from shredded pork to paté to charcuterie. Now it seems Philadelphia has added its own footnote to the form—stacking the traditional fillings on our ubiquitous Italian rolls.

O’s
1205 S. 9th St. (next to Geno’s),
215-334-6080
A friend recommended O’s for the amazing bread, and she was right. This Vietnamese sandwich shop, an attractive space with concrete floors, exposed brick walls and tables for eating in, bakes its own rolls. The floral aroma hits you as soon as you walk in, fanning your hunger as you wait (salivating, fidgeting, growling) for your sandwich. They fill the crusty baguettes with tender chunks of fried, lemongrass-infused tofu, cucumber, a little pickled carrot, jalapeño and cilantro. This is a relatively light sandwich overall—tasty, elegant and well-balanced.

Fu-Wah Mini Market
810 South 47th St. (at Baltimore),
215-729-2993
Developed seven years ago in response to demand from the West Philly vegan community, the Fu-Wah bánh mì is the richest of the three we sampled, but still well-balanced thanks to sweet, tangy pickled carrot and daikon, fresh cilantro and sharp jalapeño. It is also the juiciest; the savory drippings are perfect to sop up with the end of the hoagie. Fu-Wah’s deli counter (all takeout, no seating) offers a long menu of sandwiches, but say, “One with everything,” and they’ll know what you mean.

Nhu Y
802 Christian St., (215) 925-6544
Nhu Y, a narrow hole-in-the-wall storefront with a counter and one teeny tiny corner table, starts with a toasted Italian-style Sarcone’s roll. They use denser tofu (fried, then sliced), and build on it with sliced red chili, pickled carrot and daikon, cilantro and mayo. (I was a little skeptical of the mayo at first, but it worked.) It’s a little less sweet and sour than the others, and the feel is a touch more like a traditional deli sandwich. ■

Embrace your natural-born omnivorism. But leave the factory farms behind.