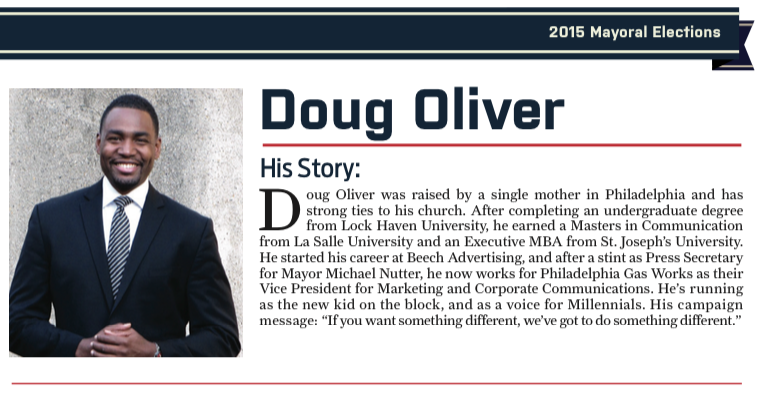 Doug Oliver was raised by a single mother in Philadelphia and has strong ties to his church. After completing an undergraduate degree from Lock Haven University, he earned a Masters in Communication from La Salle University and an Executive MBA from St. Joseph’s University. He started his career at Beech Advertising, and after a stint as Press Secretary for Mayor Michael Nutter, he now works for Philadelphia Gas Works as their Vice President for Marketing and Corporate Communications. He’s running as the new kid on the block, and as a voice for Millennials. His campaign message: “If you want something different, we’ve got to do something different.”

Vision for a sustainable Philadelphia:

Philadelphia has made great strides recently to become a more sustainable city. The progress that has been made must be built upon. As the former Senior Vice President of Marketing and Corporate Communications at PGW, I was tasked with reducing the City’s energy consumption and carbon footprint. This experience has heightened my awareness of the issues and my commitment to addressing the issue. As mayor, I will certainly do my part to ensure that Philadelphia is a livable city and sustainable in its use of energy.

When we think about sustainability, we often think “green,” planting trees and reducing carbon footprints. However, sustainability also means positioning the City for long-term sustainable growth. As mayor, I would do the following to make Philadelphia a more sustainable city: convert the City properties that use oil and steam to natural gas; analyze energy usage in older buildings to ensure they are as efficient as possible; identify cleaner, greener, abundant, locally-sourced energy sources; begin converting the City fleet from gasoline to natural gas in order to save money and reduce the carbon footprint; consider the conversion of SEPTA from diesel to natural gas or low-
sulfur diesel.

Would you maintain or expand funding for the Mayor’s Office of Sustainability?

As mayor, I would maintain funding for the Mayor’s Office of Sustainability and would encourage the integration of sustainability planning across departments. As an example, effectively cleaning our streets ensures that waste doesn’t contaminate our waterways. The result is cleaner communities and a reduction in the cost of water treatment.

What’s your perspective on balancing public health and economic development?

As mayor, I would be supportive of efforts to balance public health and economic growth. The City needs an infusion of jobs, but changes need to be made with eye for the future. The City can position itself as an energy hub and drive job creation without sacrificing air quality. As an example, investment in combined heating and power, which reduces the drain on the electric grid, can provide energy at a lower cost while maximizing the use of a clean energy source.

On safe streets for cyclists and pedestrians:

As mayor, I would work to enhance the safety and access from communities to the City’s bike lanes and trails. This is a challenging task, however, since highways, railroads and other obstructions bar access. We need to address the breaks in the trail networks that need to be filled; find ways to safely connect neighborhoods to trails and bike lanes, and create new means of access for low- and moderate-income neighborhoods.

A cleaner Philadelphia results in eliminating blight, enhancing quality of life, improving neighborhoods, reducing crime in communities, and lessening financial burden on the City to clean up litter. As mayor, I would take steps to educate, encourage and incentivize Philadelphians to reduce litter and increase recycling, including: asking merchants not to place flyers and menus on the doors of homes or businesses; requiring landlords to provide sufficient space for storing tenant trash; cleaning our City streets on a more frequent basis; requiring merchants to charge a fee for single-use paper and plastic bags to reduce usage; and educating Philadelphians about the importance of reducing waste and recycling.

Flavors of the Avenue Preview

Global futurist Jack Uldrich: A sustainable economy will require unlearning what we think we know

Flavors of the Avenue Preview

Grid staff attended a preview for the event. Check out the calibre of food you can

by Mary Van Ogtrop
Illustration by Julia Tran
Want to enjoy your commute? Try walking.
At 7 a.m., my

Top of the Heap

Scott Blunk teaches Theresa Harter, a junior, how to work a loader at W.B. Saul High