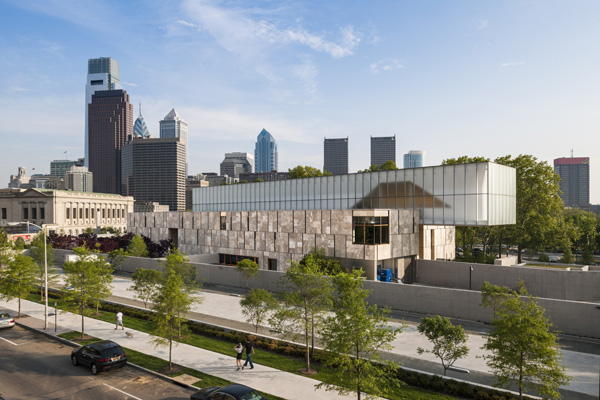 story by Shaun Brady | photos from The Barnes

While the Barnes Foundation is best known for its priceless art collection—which now resides in a new $150-million building on the Ben Franklin Parkway—its founding mission extended beyond the man-made wonders hanging on the walls to the natural beauty outside of them. The recent relocation has left most of the Barnes’ horticultural program behind at its previous home in Merion, but the new digs were designed and built using sustainable practices fully in line with that original green vision.

“When we acquired this parcel of land, a portion of which was in Fairmount Park, we had a new mayor [Mayor Michael Nutter] who was promoting sustainable issues in both design and construction,” says William McDowell, senior building project director. “So, we did it to satisfy our obligations under our lease with the city, but it took on a life of its own… And we…think it resulted in a better building.”

In late August, the Barnes was awaiting confirmation of LEED Platinum certification—the highest rating granted by the U.S. Green Building Council. If granted, the museum would become the third museum in the country to achieve the rating. It was actually at the urging of the Delaware Valley Green Building Council (DVGBC) that the Barnes even sought LEED certification, explains McDowell.

“Early on, we felt that we were going to go ahead and do all these things anyway, but were debating whether or not it was worth it to formalize the process,” says McDowell. “The DVGBC convinced us that it was important for our project to be tracked officially both by them and by the national organization so that it becomes something that Philadelphia can promote itself with.”

Highlights of the Barnes’ sustainable design include a green roof on the L-shaped Pavilion building; a 40,000-gallon cistern that collects rainwater from that roof for landscape irrigation; 12,000 square feet of photovoltaic panels on the roof of the Light Canopy that provide eight percent of the building’s electricity; and a herringbone-patterned ipê wood floor reclaimed from the Coney Island boardwalks.

“We very strongly believe in an aesthetic of good design, not just an aesthetic of sustainable design,” says Philip Ryan, Barnes’ project manager and a senior associate with New York firm Tod Williams Billie Tsien Architects. “The ipê wood floor is there partially to warm the space up and make it feel more intimate, but it’s also an extremely hard wood that’s very good for the kinds of activities that happen there. During the day there’s lots of groups passing into the collections gallery, and during the evening it hosts events, and the floor is developing a really nice patina as more people walk on it and drop glasses on it.”

Ryan credits the Barnes with “trying to weave the architectural process into their teaching about the collection in the building. We all look at these impressionist and post-impressionist paintings as very traditional, but the standards of current contemporary art at the time were incredibly avant-garde. Barnes was a very forward-looking individual and contemporary thinker in many ways.” The instructors and docents worked closely with the architecture team to see how sustainable design and architecture could be communicated to visitors. “I think that the Barnes is interested in setting an example and weaving that into the narrative of education, says Ryan.”

The architects also worked closely with OLIN, the project’s landscape architecture and urban design firm, which has offices in Philadelphia and Los Angeles. The Barnes’ garden and terrace were planted with native and adapted plants to minimize maintenance and water needs. The Barnes grounds in Merion were the primary inspiration, says Yue Li, an associate on OLIN’s project team.

Li cites the reaction of Henri Matisse, who created the iconic mural “The Dance” for the Barnes in Merion, when he first laid eyes on the original building. Looking through its French windows, Matisse said, “one sees only the lawn, only green and flowers and bushes perhaps; one does not see the sky.”

“We tried to recreate this scene of green looking out the main gallery windows,” says Li. “We planted a lot of ground cover and densely planted shrubs that buffer the gallery from the urban traffic on the Parkway.” 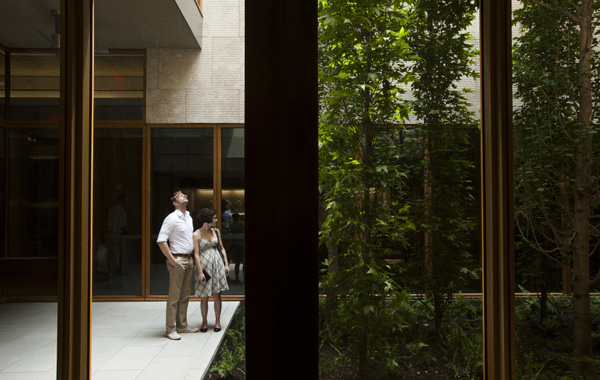 Li described how the Barnes’ design also follows the firm’s broader philosophy. “OLIN has been applying sustainable design principles since the start of our practice. Our office’s tradition is to be sensitive to the environmental impact of what we do. We view sustainability as not only referring to the environment, but also to cultural, social and economic sustainability.”

In McDowell’s view, the use of sustainable design characterizes the Barnes’ aspiration to become one of the city’s major cultural institutions. “The Barnes sees itself as a long-term institution on the Parkway,” he explains. “It will be a contributor to the arts community and an organization that wants to promote good and responsible design. We hope that we serve as a model and an encouragement for this effort to continue.”

Walls made from plastic bottles. Rainwater recycled to flush toilets. Electricity generated from

Jerky Boys: A convenience store staple gets a makeover

Last Christmas, Mark Novasack was making beef jerky to give as gifts, and shared some