story by Shaun Brady | photo adapted from A Guide to Biking in PhillyIn 1972, there were no bike lanes in Philadelphia. There was no way to cross the Benjamin Franklin Bridge on a bicycle, and SEPTA had banned bikes from all their buses, trains and trolleys. Even the few trails that existed weren’t connected. But while the climate was bleak for cyclists, it was also ripe for change.

“There was the energy crisis, there was a lot of environmental concern that had started in the sixties. A lot of people were looking at alternatives involving everything from solar energy to conservation,” remembers Bob Thomas, an early president of the Bicycle Coalition of Greater Philadelphia. “Obviously, bicycling fit into that because it’s something effective for a very minimum amount of investment. You could spend 15 or 20 thousand dollars on a solar [energy] system, or you could spend $25 and get an old three-speed bike.”

Thomas, who had been commuting by bike since junior high, saw the city’s obstacles to the sustainable practice as an indignity. He began meeting with other Philadelphia-area bicyclists at J. Mulligan’s Restaurant and Bar in 30th Street Station. The informal gathering grew into what is today the Bicycle Coalition of Greater Philadelphia, an organization former board president Dennis Winters calls “the voice for bicyclists” in the Philadelphia region. The Coalition’s goals, which have stayed the same for 40 years, are to lobby for changes in the city’s infrastructure and, perhaps more importantly, the public’s attitude toward bicycling.

Alex Doty, who has been executive director for eight of his 10 years with the Coalition, describes this year’s 40th anniversary as “a testament to tenacity. I think it shows that this is an enduring issue and an enduring passion for many people. We’ve gone from having to make a lot of noise to get a seat at the table to being viewed less as agitators than as partners who are working toward an important civic goal.” 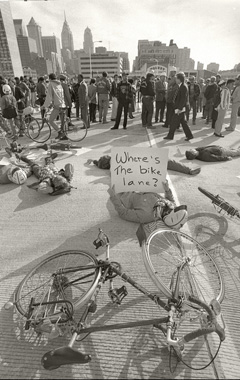 In 1990, the Bicycle Coalition staged a die-in at the ribbon cutting of the Walnut Street Bridge to protest the absence of a bike lane.Thomas explains that the Coalition’s approach has been two-fold: “One was to work for changes on a big scale, but the other side was educating people on how to bicycle.” Both are still guiding principles for the Coalition, and improvements on either front often necessitate increased vigilance on the other, explains Doty.

Though the struggle for acceptance on Philadelphia’s roads is an ongoing one, the Coalition can point to several successes over the course of its four decades. The city now boasts more than 400 miles of bike lanes and dedicated paths where cyclists can travel from Center City to Valley Forge with few gaps (which are decreasing over time). Bikes are now welcome on SEPTA, and the Benjamin Franklin Bridge is not only open to bike traffic, but will soon replace the three-story stair tower on its New Jersey side with a pedestrian and bike ramp.

And more bicyclists means safer city riding. “We know that for every time we double the number of bicyclists on the street we reduce crash risk for each individual by a third,” says Doty. “So, more bicyclists on the street equals more safe bicycling. We don’t actually have to do anything else—the people on their bikes can be total idiots with the way that they’re riding—but just by having more of them, we’re all safer.”

The City of Philadelphia has recognized this growing bike trend as well. They’ve created buffered bike lanes (a separation zone between bike and car traffic) on Spruce and Pine Streets, and painted sharrows (bike/arrow indicators on streets too narrow for bike lanes) on major bicycle routes throughout the city. “Trying to carve out space for bicyclists is tough in a street mium,” Doty admits. “But we’re seeing progress and success. These things indicate to cars, and to bikes, that bikes belong here, and they’re also a directional system for bikes, to say that you’re part a network.”

The city hasn’t always been so welcoming to bicycles. In 1990, the former neighborhood-oriented Walnut Street Bridge was reopened as a four-lane arterial highway with no bike lane. At the ribbon cutting that October, the Coalition staged a die-in where individuals sprawled across the bridge, asking for their rights as cyclists to be considered. While the response wasn’t immediate, the bridge did eventually get a bike lane.

“I think you’re starting to see a culture shift towards cars accepting bikes on the road,” says Doty. “But for a long time we were ignored and didn’t have any provision for our space on the road, so the attitude can be, ‘Why would you follow the rules of the road if those rules never took you into consideration?’ Today we have good facilities for bikes and we’re starting to see people follow the rules more. It’s a culture shift. On a good day it feels like we’re making good progress, on a bad day it’s frustrating to see people acting like jerks.” 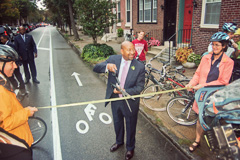 Mayor Nutter inaugurates the new bike lanes for Spruce and Pine StreetsThe construction of the Schuylkill River Trail, an objective whose beginnings date back nearly to the Coalition’s own, has been a major achievement for the organization and its partners. More recently, the Coalition announced, in association with the City of Philadelphia, the William Penn Foundation and a group of trail partners, “The Circuit,” a new name for the city’s regional trail network. The naming  coincides with an ongoing push to fill in the area’s trail gaps.

“The long-term vision is to connect The Circuit into a world-class regional trail network,” says Doty. “If you step out your door, wherever you live in greater Philadelphia, you’ll know that you can point your bike toward the east, west, north, or south and you’ll be able to ride all day on trail just a few minutes’ ride from your house.”

Doty knows the effort may take decades to realize, but cyclists can trace the route’s progress on the interactive website, ConnectTheCircuit.org. Although online, the map is the latest manifestation of something the Bicycle Coalition has done from its earliest days. One of its first projects was a map showing the best bike routes for getting places. “It didn’t mean that all the routes that were identified were excellent,” says Thomas, “but they were the best of a bad lot.”

A City for Bicyclists

For the future, in addition to expanding The Circuit, Doty points to the city’s first Pedestrian and Bicycle Plan, unveiled in 2010. “We’re excited to be partnering with the city to see that plan brought to fruition,” he says. “A priority for us in the foreseeable future is that we want to see the diversity of bike riders continue to grow and for bicycling to represent our population in Philadelphia.” Currently, women are one-third of riders, and African-Americans and Latinos are biking at rates lower than the rest of Philadelphia’s population. While bicycling is no longer exclusively the domain of 25-to-50-year-old white men, says Doty, the Coalition wants to see minority ridership increase further.

Like a proud parent, Thomas beams that he’s watched the Bicycle Coalition “grow from an all-volunteer organization to a really sophisticated outfit, providing an incredible amount of very effective public services and advocacy.” Citing the ongoing effort to change people’s and institutions’ attitudes towards bicycling, he cites an unnamed arts institution opening on the Avenue of the Arts a few years back, with no bike parking in its design.

“I called and talked to the president and CEO and they said, ‘We’re a world-class institution and bike parking would detract from the appearance of our beautiful building.’ So I sent them pictures of the Concertgebouw concert hall in Amsterdam and the Paris Opera with their high-quality, beautifully-designed bike parking. That kind of thinking is changing because the Bicycle Coalition has really shown people this is not just some kind of lunatic fringe on the outside. A lot of improvements are necessary, but success breeds success and the Coalition has played a big role in that.”

For more information on the Bicycle Coalition and their work, visit bicyclecoalition.org

story by Suzanne LevyEvery week, on Friday night, something close to a miracle happens at our

Founded in 1966 as a program of the Bicycle Coalition, Neighborhood Bike Works is now the

story by Char VandermeerHeat can beat even the most conscientious of gardeners. All it takes

story by Samantha WittchenFACT: Americans are estimated to buy as many as 12 million car seats