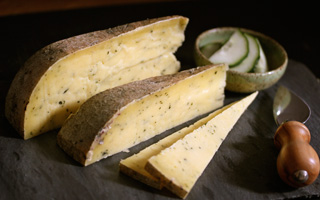 photo by Tenaya DarlingtonIN THE WORLD OF FLAVORED CHEESES, Full Nettle Jack (a nod to Stanley Kubrick’s Vietnam film, Full Metal Jacket) is a special character. Even if you’re the sort of person who bristles at the mere mention of “nettles”—they do sting, after all—you ought to reserve judgment. This bright-tasting cheese is both vegetal and herbaceous with a kick of vinegary acidity.  ¶  The taste evokes dill pickles, and would do well as slices on a Cubano sandwich. Full Nettle Jack is also a great cheese for melting. In fact, cheesemaker Sam Kennedy swears by Nettle Jack macaroni and cheese.

Kennedy makes this natural-rinded cheese at Cherry Grove Farm in Lawrenceville, N.J. “We released it in 2010, and it’s become one of our signature flavors,” he says. “We use [Monterey] Jack as a base because it’s so friendly, and to some people nettles are a little scary.”

Using nettles as an ingredient in cheesemaking draws upon an established tradition; the plant actually contains a natural coagulant that helps “set” cheese, making it a handy substitute for animal rennet. Kennedy starts with rich, raw milk from the farm’s sustainably-raised herd then, he adds local dried nettles from his neighbors at North Slope Farm. After 60 days in the ageing cave, Full Nettle Jack is ready for market. —Tenaya Darlington, madamefromageblog.com

Believing is Art: A would-be architect sketches a surprising business

story by Jaclyn HardgroveWhen Sara Selepouchin was younger, her parents had a strict policy about