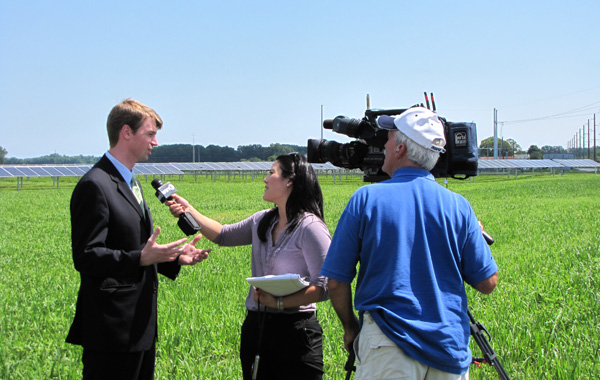 story by liz pachecoCollin O’Mara’s first two years as the secretary of energy and the environment have given the state of Delaware some serious sustainability bragging rights. Thanks to its youngest appointed cabinet member (he was appointed in 2009 when he was 29 years old), the state now supports green building and energy efficiency programs, the first statewide curbside recycling pick-up service and legislation promoting green jobs. And that’s just the beginning. O’Mara, who is also a LEED-accredited professional, came to Delaware from San Jose, Calif., where he lead the city’s Green Vision project and a citywide green economic development initiative. GRID spoke with O’Mara about his decision to come to Delaware, the benefits of being a small state and how being young has become an asset.

GRID: Why did you decide to come to Delaware?
Collin O’Mara: In transforming our economy and addressing the climate crisis, it’s really about working on a national solution. … In Delaware, I was fortunate to meet Gov. Jack Markell, who is a very innovative thinker; [he] understands the economics of the environment in a way I think very few politicians do. So, when he offered me the opportunity to come and try to put in place many of the policies I feel are going to be necessary to rebuild our economy as well as address the underlying environmental challenges, it was a really great opportunity.

How does Delaware’s size impact your work?
Being a small state where you can get things done very quickly, we’ve been able to attract some of the leading clean tech companies in the world to manufacture in Delaware. We’ve been able to have deeper renewable energy penetration in the last couple of years than nearly any other state in the country. These are efforts that are important locally, but also show that we can make community progress in a short amount of time nationally, if we have the right set of policies and the right commitment of leaders.

What project or success in Delaware are you particularly proud of or excited about?
I was extremely proud of the leadership the Governor provided… to bring the statewide recycling program to Delaware. It’s a program that requires the hauler to actually provide recycling services at the curb for every single household in the state. And it’s one of the first programs of its kind.

[…] We’ve also done a lot of work on green building and efficiency work for existing buildings. There was a federal program that was debated a few years ago that was never passed called Home Star. The goal was to do massive retrofits of existing homes. We actually decided not to wait for the feds and implement the program. We’ve had more than 4,000 homes have very deep retrofits already. That may not seem like a big number, but that’s more than almost 2 percent of the total houses in Delaware. We had another million CFLs that have gone out, and we’ve had tens of thousands of appliances. So, we’ve really been trying to make smart investments.

And we’ve launched an innovative program from the Green Building Council for the construction of new homes where we actually provide a rebate, a grant at closing, so a lot of folks can borrow less to [pay for green improvements]. Even though there are lots of operating cost benefits, a lot of folks can’t afford to take out an extra couple thousand dollars.

A good amount of press attention has been put on you being so young. How has your age impacted your work?
In many ways, the climate crisis is going to be one of the most significant challenges, if not the most significant challenge facing my generation. So, I think I’ve been able to bring a slightly longer-term perspective to some of these issues…. I actually think that my age is an asset in many ways because I’m not necessarily locked into some of the older battles and the traditional dichotomy of us-them: business versus environment.

Collin O’Mara is the recipient of the John Partridge Leadership Award; given to an individual in the private or nonprofit sector who has furthered green building design, operation, policy or practice in a new sector or has overcome challenges to implementing green building.

Pennsylvania was once an environmental leader. We can be again.