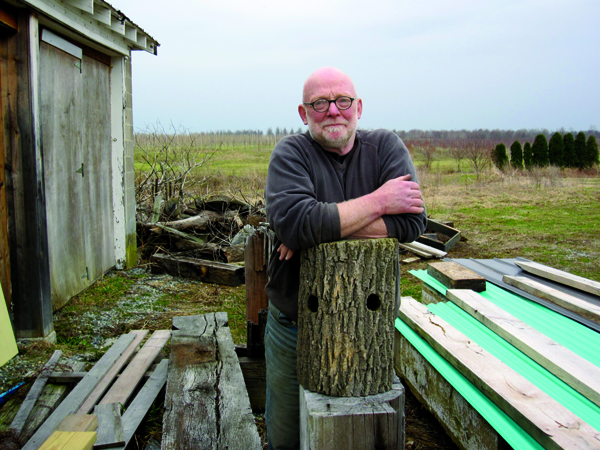 I interview Jack Larimore from an unfinished bench in his studio. Reclaimed wood timbers lay on an angle—dominos mid-fall—braced by a small round ball. The top is sanded, but still rustic. As he speaks, I can’t help but run my finger along the grain of the wood.

Working with salvaged materials is still new for Larimore—as are his surroundings. After 30 years as  a furniture designer in Philadelphia, he recently moved his studio here, to Cumberland County, NJ, about an hour from the hubbub of the city (though his current neighborhood, Mt. Airy, moves at more of a shuffle).

“For me, it’s a big change in the context in which I’m working,” explains Larimore. “I’ve been in the city for a million years. It’s also been interesting for me to be by myself, something I’ve never had in a studio.”

Finding this area was something of a happy accident—a few years ago he attended a nearby barbecue with his wife. They fell in love with the agricultural landscape and the smell of the nearby salt marshes, and eventually purchased this 10-acre farm. Larimore now spends about four days a week out here, working in the garage-turned-studio adjacent to a field filled with miniature horses (they rent the space to a neighbor who raises them). The couple hopes to find someone to do a bit of organic farming on the land as well.

“I am, at heart, a naturalist,” says Larimore, who grew up in a bucolic area on Lake Michigan. “It’s what drives me. My work has always had some level of nature discussed within it. So, when the whole reclaimed wood thing started happening, I began playing around with it, using it here and there, and realized that it had some juice for me. The previous life of the timber brought something that wood bought from the lumber wholesaler didn’t have.”

Larimore trained as a landscape architect, but quickly burned out on the politics and compromise of life in an office. After three years, he took a leave of absence and bought an old, run-down house off South Street. The rehab process gave him immense satisfaction. “I loved getting up in the morning,” he recalls. “I loved figuring out what needed to be done, going out and getting the materials, and doing it.”

This was the mid-’70s, and the house happened to be around the corner from Richard Kagan’s furniture studio and gallery. Larimore started experimenting with the craft, and soon he was hooked.

As his career developed, Larimore worked mostly by commission—tackling elaborate, intensive projects that involved heavy collaboration between the artist and the buyer. But recently, he’s gone in a slightly different direction, focusing more on sustainability and accessibility.

Larimore’s material of choice for his new line is large, salvaged timbers. Most of them are acquired through Provenance Architectural Salvage (profiled in Grid’s recent House & Home issue).

The way he uses them is what makes these pieces so arresting. “I realized that the best thing about this reclaimed timber is manifested in its timber form,” he explains. “The idea of slicing this stuff up and making flooring out of it, or planking it to make a tabletop, is something I do a little of, but what really excites me is that these pieces of wood really are timbers. They do two things better: they speak about the tree in them—often a significant part of the concentric growth ring is evident—and they’re pretty clear about having been part of a big, old building. It’s undeniable. I went about trying to design a line of furniture that speaks to that, but does it in a way that’s not particularly rustic, that also speaks about modernism and sculptural forms.”

Against the Grain: Shiny furniture without the fumes

Local Business: Into the Woods