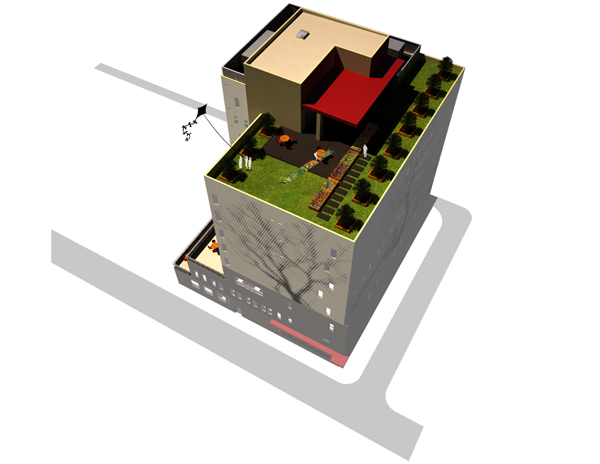 Permanent housing for the homeless uses green design
by Will Dean

When the pastor of St. John the Evangelist Church in Center City approached Angelo Sgro, executive director of the Bethesda Project, with an empty building to use for their homelessness efforts, he didn’t have to think before answering.

“I saw it and immediately said yes, because if you are working with the homeless and someone offers you an empty building in Center City, you have to,” says Sgro.

The site, at Camac and Ludlow, is a couple blocks away from City Hall and Market East and right next to St. John’s historic stone church. Scheduled for completion in 2010, the building will be eight stories tall and feature 79 housing units, as well as offices for the church on the ground floor. The units will provide permanent and semi-permanent housing to homeless individuals, instead of just temporary shelter.
“At the root of it all is an economic problem that there are not enough affordable housing options for poor people,” says Sgro. “You can’t afford a single-bedroom apartment on minimum wage.”

Just building such a structure in Philly is a big victory for homelessness advocates. “It’s extremely difficult to develop anything like this anywhere in Philadelphia,” explains Sgro. “As soon as you say ‘homeless,’ people protest.”

On the second and third floors, Bethesda will run 24 single-room units with microwaves, fridges, bathrooms and shared common area kitchens. Project HOME will have the fourth through eighth floors for 55 efficiency apartments with their own kitchens.

In addition to the social aims of the building, it will also feature some really smart design touches that will help reduce costs and resource use. The architecture firm that designed the building, DLR Group, was excited by the chance to design something with social and environmental good and plans to apply for LEED certification.

Joe Evans was a carpenter by trade until his back went out. With some time off,