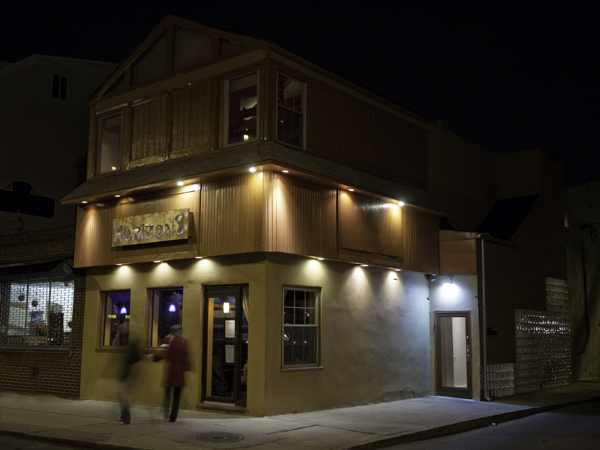 Upscale vegan eats warm your stomach and conscience
by Will Dean

With the rush towards eating locally, it’s surprisingly easy to forget about the original “ethical” eating choice that for hundreds of years has attracted people like Ben Franklin, Charlotte Bronte, Albert Einstein and, of course, me. While Kate Jacoby, co-owner and pastry chef of upscale vegan eatery Horizons, gave up meat out of concern for animals, there are plenty of environmental reasons as well.

“If you look at animals as the middle-man, or middle-animal, in the food production chain,” says Jacoby, “there’s a lot of waste and pollution in raising them for food.”

One of the most frequently quoted statistics is that it takes 10 pounds of feed to produce one pound of beef, along with the energy of transporting food for the animals, the methane (a greenhouse gas) produced by flatulent animals and the massive amounts of sewage raising large numbers of animals creates.

But meat tastes so good, you might say. Well, if you could eat at Horizons every night, you might stop fantasizing about the perfect steak.

“We want to be a really good restaurant that just happens to be vegan,” says Jacoby. With seasonal dishes like the Mushroom Pub Plate and year-round favorites like Grilled Seitan (a foodstuff made from wheat that has some of the texture of meat), there are subtle and delicious choices for both those who are accustomed to meat and potatoes, and the long-term meatless.

If you tend to look more like the hippie veggie stereotype, though, you can still fit in. When I visited in March, there was a conservatively dressed older couple a table away from a seriously bearded fellow and a woman sporting artificially bright red hair and an equally loud striped shirt and peasant skirt.

There’s also plenty for local eaters. “Two of our main proteins come from local producers: Fresh Tofu [in Allentown] and Ray’s Seitan [Philly],” says Jacoby. Many of their mushrooms come from Kennett Square, and their blueberry cheesecake uses fruit from Hammonton, NJ.

For those looking for more traditional Philly foods, Horizons plans to have a special menu for April which will feature dishes inspired by the original menu of the first iteration of the restaurant as a casual cafe in Willow Grove that opened in 1994. There’ll be mock chicken salad, sandwiches and perhaps even a vegan cheesesteak.

“We try not to be too obvious about it all,” Jacoby says. “We go under the radar and we’re hoping to make people think about what they eat.” She doesn’t want to antagonize meat eaters so much as subtly convert them. “We all coexist here in the cheesesteak town.”