“What do you mean you can’t recycle this?”

This is a question I get from my 6-year-old son all too often, especially when we’re bringing new items into our home.

I want to tell him that we need to figure out an economy that can thrive without such an outsized focus on consumption. But he’s 6, obsessed with “Paw Patrol” and surrounded by an extended family that, like most, revels in giving gifts throughout the year. So I set good boundaries, reduce consumption with our household buying habits and give myself a break.

I then also have to admit to myself that I, too, like getting presents. My wife recently bought me an ax to help fuel our pandemic-inspired yard fires that happen thrice a week. I was relieved that it came in a simple cardboard box stuffed with paper until I found out that my wife had to dry the metal blade and wooden handle after it sat out in the rain after delivery.

The problem, for better or worse, is that we like stuff, and many times we need packaging to deliver it safely to our homes or local shops. But this packaging is clogging our oceans and mostly being disposed of in landfills and incinerators. What do we do?

As I have written about in previous Grid columns, the answer to my son’s question is that for most packaging, especially plastic packaging, there is either no viable recycling process or, even if there is a process, there is no viable market for the recycled material.

But the spirit of his question is still valid. Why is there so much packaging in the first place that is basically designed to be discarded? And if we do need it, why can’t we utilize a more circular solution of reuse to manage this packaging?

After talking to Jordyn Gatti and Cailynn Chase of the bulk-food start-up Rise Mrkt, an answer jumped out at me.

We have all of this packaging because this is just how it’s been done for so long and there’s seemingly little incentive to change.

But Gatti and Chase feel that change is coming.

In Chase’s words, “Companies who concern themselves with public and environmental health will become less optional and more obligatory as fear and anxieties continue to ramp up that we need to do something.”

“Based on what we’re seeing, it is likely that brands and stores that promote reduced packaging will have a competitive advantage over those who don’t.”

“In a similar way, organic foods were a relatively new consumer concept not long ago. Now organic products can be found in practically every store, with their price[s] becoming gradually more affordable,” she says.

Good Buy is focused on providing consumers with the resources to take circularity into their own hands, with items in stock such as reusable jars for bulk-bought detergent or soap, as well as reusable cutlery and dish sets for to-go meals.

To secure the business model, they view their mission as not only helping consumers to transition to a zero-waste lifestyle by providing all of the needed supplies under one roof, but also to provide the tips and encouragement to make this transition. 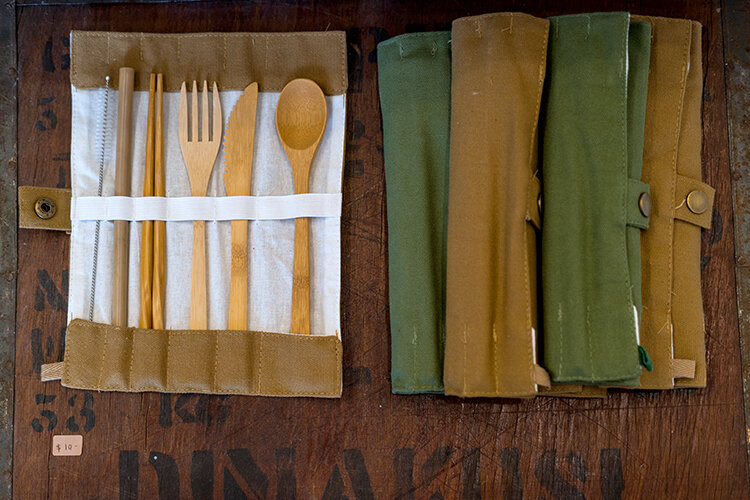 But while Good Buy is looking to help consumers transcend the status quo by taking matters into their own hands, Rise Mrkt vies to challenge the status quo while also acknowledging current consumer habits.

Although Chase and Gatti have currently put Rise Mrkt on hold due to the pandemic and the need to focus on other business pursuits, when operating, Rise provides direct-to-consumer sales of grains, nuts, baking goods, spices and other types of materials in reusable pouches.

Once a consumer is finished with the packaging, Rise Mrkt instructs them to store the packages “under the sink.” Rise has calculated that 30 pouches is a fuel efficient enough number to reduce the carbon footprint, so once you hit 30 purchases, an email reminder accompanied by a shipping label is sent to your inbox and you send the packages back to their facility in Brooklyn.

This is one of those ideas you really hope takes flight after the pandemic. Gatti and Chase are very hopeful that there are enough people who want to “vote with their wallets” to create demand for their service.

But they both also have a realistic view of the challenges to updating supply chains and changing pricing structures. They acknowledge that the external subsidies of the make-take trash model, with taxpayers funding waste management systems and cheap oil for plastics, makes their service more expensive, and therefore makes their products inaccessible for much of the population. And then there’s the major corporations who benefit from this model and have little incentive to change.

In 2019, the innovative recycling company TerraCycle, headquartered in Trenton, partnered with Unilever and other major brands to launch Loop.

Its system works much like Rise Mrkt’s, but instead of pouches, Loop uses steel containers. And instead of shipping the pouches back, the consumer places the containers in the Loop tote that was used to deliver their products, and then the tote is picked up on the next delivery day. (Loop is serving all of North America.)

But the biggest difference is in the product.

I must admit that the pictures of the bulk grains on the Rise Mrkt looked delicious. But Loop offers brands that many consumers already use—like Tide, Seventh Generation, Nature’s Path and Häagen-Dazs put them at a competitive advantage.

Still, for a small player like Rise Mrkt, Loop’s widespread adoption should be looked at as a benefit rather than competition, because it’s changing consumer habits toward Rise’s model. And even though Loop is working with the major brands, their outlook mirrors that of Rise.

TerraCycle Creative & Communications Vice President Lauren Taylor echoes Gatti and Chase’s assessment that people are voting with their wallets, noting that there is still room for more incentives, like “rewarding those who purchase inventory from manufacturers who are making their packaging practically recyclable or from recyclable materials.”

“Based on what we’re seeing, it is likely that brands and stores that promote reduced packaging will have a competitive advantage over those who don’t,” she says.

This was reassuring to hear from someone working with global brands.

But can I confidently tell my son not to worry about packaging because the whole industry is going circular? And what can Philly do to accelerate the circular economy of packaging?

Chase has a boldly proactive idea.

Rather than tax businesses using too much packaging or continue to invest incredible sums of money in waste collection and waste management facilities, why not publicly support businesses reducing their packaging through government grants or direct payments, so they can pass those savings down to the consumer? To some government finance officials and politicians, this may sound ludicrous. But to me, her defense seemed brilliant in its pragmatism.

“If there is taxpayer money going to waste management in the city and it becomes cheaper—or at least ‘break-even’—to instead give that money to a local small business in our community for not creating that trash in the first place, this sounds like a much better way to do good for the local environment,” she says. “And there’s a much higher likelihood that money issued by the grant is actually going to stay within that community as well.”

Everyday when I commute to work on my giant orange bike, American cultural values are on