Tick Tock: Pennsylvania is ground zero for Lyme disease, and one Drexel professor is pursuing a cure. 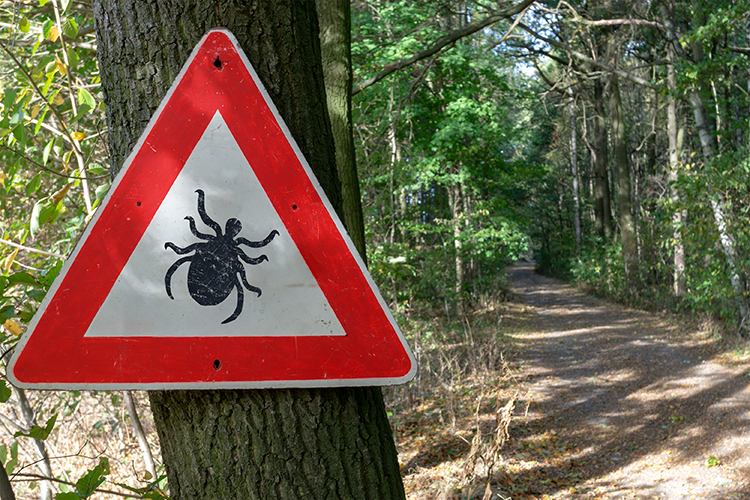 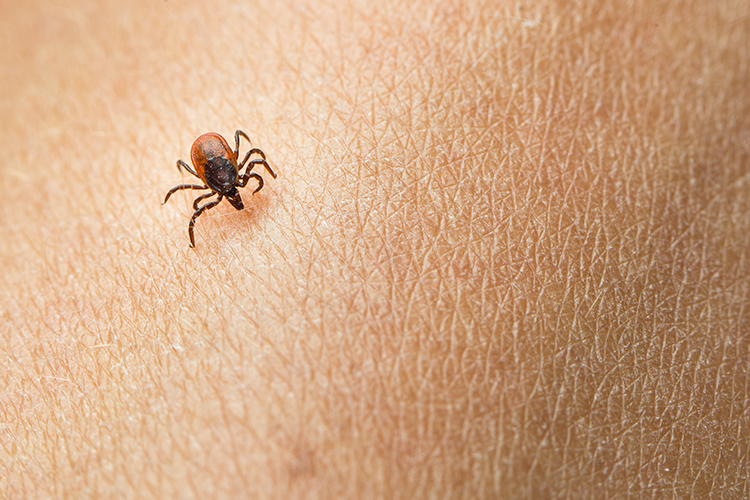 Kerry Boland doesn’t remember getting a tick bite. It was 2002 and she was entering her first semester at Georgetown University when she began experiencing flu-like symptoms, which landed her in the emergency room.  A short time later, she started experiencing extreme food intolerances. She couldn’t eat gluten without hours of vomiting following. One morning two years later,  when she was studying overseas in a direct matriculation program at the Université Lumière Lyon 2 in Lyon, France, she tried to get out of bed to hit her alarm. “My legs weren’t working, I was basically paralyzed from the waist down,” she says. She frantically called her family back home in Washington, D.C., telling them she thought she had meningitis. When the host family she was living with returned and called the hospital, Boland got a cortisone shot from the medical team and was told she probably had a pinched nerve or muscle spasms. Later that same day she had more “spasms,” which she later learned were seizures. She returned to the U.S. a month later and got an MRI to evaluate for a suspected slipped disc. “They couldn’t find a thing,” she says. “At that point, the mystery began.”

Tick populations are expanding in both geographic range and number, and the list of tick-borne illnesses, most notably, Lyme disease, is on the rise as well. According to the Centers for Disease Control, it’s the fastest-growing vector-borne disease in the country.

Science is still unraveling the complexities of this puzzling disease and one Philadelphia scientist, Garth Ehrlich, is trying to get ahead of the curve.

I asked Ehrlich, molecular biologist and professor at Drexel University, when the most appropriate time to publish a story on Lyme disease might be.

Anytime, he said—there is really no such thing as “tick season” anymore.

Ticks are arachnids, meaning they are more closely related to spiders and scorpions than insects. They are considered ectoparasites (external parasites), meaning they live by eating the blood of other animals. There are 899 known species, with 90 of those species residing in the United States.

The loathsome deer tick, also known as the black-legged tick, is about the size of a sesame seed, with a reddish abdomen and black semi-circle on its dorsal area.

Deer ticks were first thrust into public consciousness in the 1970s. This was when scientists discovered that the bloodsucker from the Rocky Mountains was the only carrier of Lyme disease (which, if little understood today, was much less understood at that time). The flu-like symptoms and bullseye rash became synonymous with the arachnid.

The lifespan of a deer tick is about two years from egg to adult. They dine on animal blood just three times: the first to change from larva to nymph: the second from nymph to adult; and finally, one more time as an adult to lay eggs. At any one of those three feedings, they can pick up Lyme bacteria from an infected animal.

In order to transmit the bacteria to another host, the tick must be attached for at least 24 hours.

About 300,000 people are diagnosed with Lyme each year according to the U.S. Centers for Disease Control and Prevention. Those numbers are increasing across the country, and Pennsylvania is the epicenter. Between 2004 and 2016, Pennsylvania saw more than 73,610 cases of tick-borne diseases — more than any other state.

Lyme disease is caused by Borrelia burgdorferi, a bacteria from the same family that causes syphilis and gum disease. It only creates chronic diseases, says Ehrlich.

Early symptoms of Lyme include flu-like symptoms, namely fatigue. If untreated with antibiotics, it can lead to facial paralysis, arthritis and neurological disorders.

Boland had been tested numerous times for Lyme disease with the Two-Tier Lyme test, the two-step test commonly used when a patient presents with symptoms of Lyme. It was always negative.

“I have a laundry list of diagnoses,” says Boland. Most if not all of them are probably triggered by her untreated Lyme, she says.

She’s been diagnosed with everything from Hashimoto’s disease in 2006, to Lupus in 2015.

“I just felt like people were throwing pamphlets at me,” she says. “They weren’t really listening to me and my symptoms or looking at the timeline.”

She says some doctors were questioning her mental health.

“My vitals looked amazing. They wouldn’t believe me. They thought I was a hypochondriac,” she says.

By 2016, 14 years after her first flu-like symptoms, Boland had trouble walking without feeling like she would pass out.

“My immune system started attacking my liver. My organs were failing. I made peace with the fact that I might die young,” she recalls.

Boland, like most Americans, believed that the Two-Tier test for Lyme disease was reliable.

The truth is that a reliable test for Lyme disease doesn’t exist.

There are multiple reasons for this, says Ehrlich, one being that the agents used to make that test were developed from a 40-year old strain of Lyme. The organism evolves, he says, so you could be infected with a variant strain of Lyme that has mutated and the test wouldn’t recognize it.

It was a Pennsylvania friend that first told her that the test for Lyme disease was faulty and urged her to pursue a diagnosis by other means.

“In 2017, I finally found a functional medicine doctor who believed me and my symptoms,” says Boland.

Her doctor requested various Lyme disease and immune tests to help find the root cause of her symptoms, including a Western Blot and CD57 test. After being referred to a Lyme-literate doctor (LLMD), she tested positive for two coinfections—Babesia, a Malaria-like blood parasite, and a bacteria known as Ehrlichia—both transmitted by ticks.

“That’s when I finally got my answer,” she says. She was officially diagnosed with Lyme disease. “But it wasn’t over yet.”

She began antibiotic treatment, but it made her terribly sick.

“If you talk to any Lyme patient you’ll hear the term ‘herxing’,” she says, “where you’re killing off so many bugs…and as they die, they release toxins into your body and produce inflammatory cytokines.”

The detox pathways of Lyme patients are already weakened, and so the body can
’t process the toxins, and you feel even sicker, she explains. Not unlike the side-effects of chemotherapy.

Lyme bacteria is immunosuppressant, says Ehrlich. Like the HIV virus, it reduces the body’s ability to fight not only Lyme disease but other infections as well.

Boland eventually learned that she had been experiencing “Chronic inflammatory response syndrome,” and that her Lyme disease had activated certain genes so that her immune system doesn’t recognize biotoxins. So any exposure to toxic mold (such as in water-damaged buildings) causes inflammation and a worsening of Lyme symptoms, and makes treatment more complicated.

According to ehrlich, the main factors behind the surge in deer ticks, and thus heightened cases of Lyme disease, are climate change, a lack of tick predators and an explosion of the mouse population.

In fact the name deer tick is misleading. It suggests that deer are the main host for these ticks. Deer can carry them, says Ehrlich, but the vast majority are on mice. Because of the misnomer, most people don’t realize that they can be bitten by a deer tick in their yard or on a city playground.

These mice are everywhere, including our homes.  The white-footed mouse has been referred to as one of “the most successful mammals in Pennsylvania,” owing to their range and ability to survive in diverse habitats.

In a yet-unreleased study by Ehrlich’s lab on white-footed mouse specimens, 25% of the mice tested positive for Lyme disease.

In the lab, there are two things that Ehrlich and his team are focusing on. The first is characterizing all of the different bacteria ticks can carry.

“Lyme ticks are sewers,” he says. “People [with Lyme] are probably co-infected with pathogens.”

Ehrlich’s lab uses a unique classification system, what he calls “pan-domain for diagnostics criteria,” which allows them to identify every bacteria down to the species.

“Others can only tell you various species,” he says. “We can tell you every species that’s there.”

There are enormous differences even within strains of Lyme bacteria, he says, like “the difference between a chihuahua and a Saint Bernard.”

Chronic Lyme is another focus of the lab.

More than 50% of people infected with Lyme never get the bullseye rash, meaning they have a higher risk of developing chronic Lyme, he says.

Once the biofilm has colonized the body, there are no current drugs that can eradicate it, he explains.

His lab is trying to invent a drug that can combat chronic bacteria by blocking the enzyme that triggers the bacteria to transition from acute to chronic. This drug could be used to combat all kinds of chronic diseases in concert with traditional antibiotics.

He gives the example of children who have cystic fibrosis. They get chronic infections in their lungs that can’t be cured.

“We can never get rid of them, but we can control them,” he says. “That’s basically what we have to do with chronic Lyme disease.”

Boland is now a member of the PA Lyme Resource Network, a cohort founded in 2012 that provides resources on Lyme Disease, and support and advocacy for Lyme patients.

“Since my diagnosis, I was looking for a way to put purpose to my pain,” says Boland.

She was feeling discouraged by the lack of information and the amount of misinformation.

“I really wanted to help educate people about the disease because I wouldn’t wish this on anyone,” she says. “I hope my story and experience can help prevent this from happening to someone else.”

The network advocates that long-term antibiotic treatment is both safe and rational.

“It can be beneficial because Lyme can be persistent,” says Boland.

The majority of Lyme cases are treatable with antibiotics; if caught early, they can be very effective.

However, short-term Lyme treatment can just as well fail, and that percentage of patients needs different options, says Boland.

And if you suspect you might have a tick-borne illness, or if you’re still not feeling well after the initial course of antibiotics:

“Go see a Lyme-literate doc because you don’t want to end up like me,” she says. “It gets way more complicated in late stage to get to remission.”

“Ticks do not discriminate,” she says. “Everyone is at risk.”

Lyme disease is still under-researched with low awareness and a low rate of prevention actions. Yet, it’s rapidly becoming more prevalent and affecting all populations.

“We need help,” says Boland, from health practitioners, who could benefit Lyme patients by learning more about the disease and from elected officials, who could push for things like insurance coverage for long-term treatment.

“It’s controversial and it shouldn’t be,” Boland says. “As a patient, it’s really traumatic to be in that crossfire.

Curbed Progress: The PA Senate is standing in the way of protected bike lane installations across the state.

Curbed Progress: The PA Senate is standing in the way of protected bike lane installations across the state.

The Second Shift: These talented black women have had extraordinary side gigs

By Constance Garcia-Barrio Devaluing black women’s work is a holdover from slavery time. It often cuts

Back to School, to Strike for Climate! School-age children are protesting for new policies

By Meenal RavalThere’s a Global Climate Strike planned for Friday, September 20, days before the United