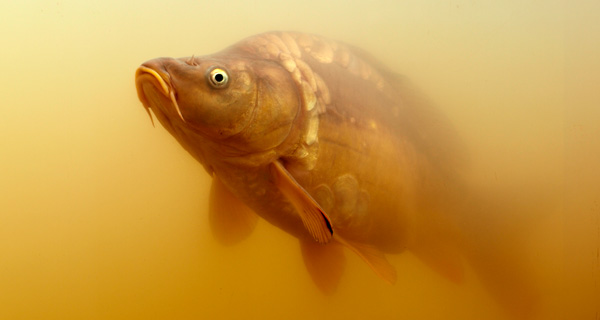 story by Bernard BrownOne nice thing about snorkeling in Philadelphia rivers is that you generally don’t have to think about sharks (the occasional, adventurous bull shark notwithstanding). But carp scare me, or at least startle me. More than once I have been nearly shocked out of my flippers by carp (which average the size of my leg) emerging from deep murky holes and lumbering past in the water. From land, I have studied the surface of more than one fetid Philadelphia pond for evidence of turtles and found my eyes drawn to something huge, rooting around in the shallows. Not a turtle…what the hell? A carp?

The carp we find everywhere, from the Schuylkill River to the Centennial Pond in Fairmount Park West, are Cyprinus carpio and native to Central Asia. They were domesticated thousands of years ago and spread through Europe by the ancient Romans. In the late 1800s, they were stocked in U.S. waterways for food. Don’t see carp on a lot on menus? They’re often ground and seasoned into the Passover delicacy gefilte fish. Joseph Perillo, aquatic biologist supervisor for the Philadelphia Water Department, notes that aside from traditional dumplings, carp end up smoked. Whether smoked or gefilte, you probably don’t want to eat the ones in Philadelphia.

Usually the “do not eat” advisories apply to fish near the top of the food chain. Flathead catfish, for example, another pesky out-of-place fish in Philadelphia, eat other fish and thus accumulate certain toxic metals and chemicals in their flesh. Carp, however, are omnivores and eat closer to the bottom of the food chain. Unfortunately for hungry fishers, carp find their food by rooting around in the mud, thereby stirring up and ingesting long-settled pollutants.

This rooting around is what makes them a pest. When they disturb the floor of the river, it increases the water’s turbidity, or cloudiness, and that can prevent sunlight from reaching the aquatic plants that other fish rely upon for food. “We really try to hang onto that habitat,” says Perillo. The weedy shallows carp destroy provide a great place for other fish to lay their eggs and for their babies to hide as they grow. And in flowing water, carp can raise enough silt in shallow, rocky riffles to cover eggs of other fish.

Outside of Pennsylvania other carp species (namely the Asian carp) are swarming up the Mississippi River system and wreaking havoc in the Great Lakes. Besides their destructive habits, these carp are most famous for leaping high out of the water. This is all fun and games until someone is hurt—a speeding boater plus a 40-pound airborne fish equals trouble.

The carp we have in Philadelphia can breed their way out of almost any jam. I thought Perillo was exaggerating when he said they can lay “millions of eggs,” but sure enough, females can lay a few hundred thousand eggs at a time and can spawn multiple times in a season. Factor in their ability to live in just about every body of water—they can even gulp air when oxygen levels are low—and they’re almost impossible to eliminate.

Despite their destructive characteristics, there doesn’t seem to be any concerted effort to get rid of our resident carp. They were initially stocked as game/food fish, and the state Fish and Boat Commission still regards them as such and not as a pest. But passive acceptance can’t work for all invasive fish in Philadelphia. The Asian snakehead fish, voracious predators that can live on land long enough to wriggle from pond to pond, are now firmly established in the mid-Atlantic. They’ve taken over the “lakes” in FDR Park and apparently made it up the tidal portion of the Schuylkill and are hanging out below the Fairmount Dam. Compared with snakehead, carp are nothing to fear, but that doesn’t mean they aren’t a problem that needs to be addressed.

BERNARD BROWN is an amateur field herper, bureaucrat and founder of the PB&J Campaign (pbjcampaign.org), a movement focused on the benefits of eating lower on the food chain. Read about his forays into the natural world at phillyherping.blogspot.com.

For years, yeast was a mystery to me. Though I grew up

Sweet Dreams: A quest to conquer the best in local gelato