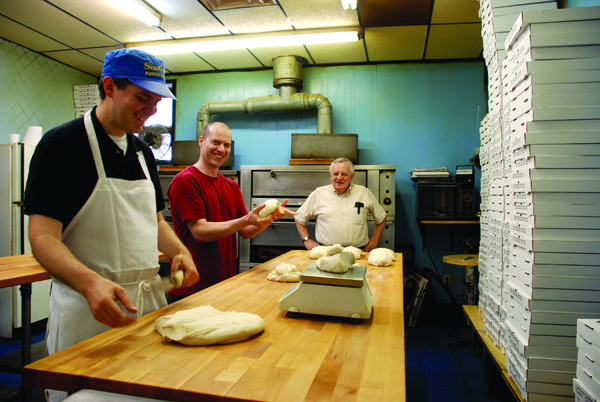 This month’s cover story on Greensgrow Farm hits on a number of our favorite issues—cultivating community, repurposing vacant land, food and self-reliance—but, at its core, it’s about the joys of hard work. As my dad used to say, “Hard work ain’t easy.” He would know. With the help of my mom and their four children, my dad has anchored a family business for the past 33 years. The place is called Sizzle Pi, a pizza and hoagie restaurant in Wilkes-Barre, PA.

I’m not sure whether to speak of Sizzle Pi in the past or present tense. In May of this year, a handwritten sign made with marker and hoagie paper appeared on the front door. It read, “Closing for the summer.” There was no reopening date. Will Sizzle Pi return? That’s a question for my parents. But the possibility that it might not hit me pretty hard. I had to make sure I returned to the kitchen, and made pizza one more time.

Putting on the apron and the blue painter cap I wore throughout high school, college and a few years after that was both jarring and familiar—like seeing Ronald Reagan speaking from the White House. Intensifying the déjà vu further was the presence of my good friend Scott. We both began working at Sizzle Pi when we were teenagers. We attended the same college in Wilkes-Barre, ran the radio station there together and, for a number of years, he worked for me as a web developer. When I moved the company from Northeast PA to Philadelphia, he came with me.

We began the day by making dough. The water temperature is supposed to be warm, but with shards of cold running through it. The salt is added not by measuring cups, but by handfuls. Then I cut the dough into “helmets” (there is a whole vocabulary for the elements and processes involved in making our pizza). It took only a few tries before I cut one to exactly 28 oz. Still got it.

Before we knew it, I stood before the ovens, baking knife in one hand and a hot pad in the other. Scott, one of the best “cutters and boxers” we ever had, and someone with an overdeveloped work ethic, stood by waiting for the pizza to finish baking. “It’s funny,” he said. “Even though I’m not doing anything right now, I don’t feel bad about it. I wouldn’t feel that way programming.” I knew exactly what he was talking about. Responding to email is like shoveling snow in a never-ending blizzard. Little digital snowflakes pile up in my inbox, reminding me that the job is never finished.

Several months ago, we spotlighted West Philly’s Hybrid X team, a group of amazing high school kids who developed one of the coolest and most fuel-efficient cars in the world. During the research for that story, the book Shop Class as Soulcraft by Matthew B. Crawford kept coming up. Crawford argues that grappling with the real, physical world—what we often refer to as blue-collar work—breeds intelligence, community and morality.

And pride. Making and baking pizza again, I remembered the countless instructions everyone received under the employ of Sizzle Pi. Everything had to be done a certain way. When you build something from nothing, whether it’s a car, an urban farm or a pizza place, you understand how things operate in their totality. It’s hard work, and there’s nothing better.

From the Editor: Handlebars and Hops

A Farewell to Pork… and Beef… and Chicken…

From the Editor: The Pleasures of Slow Food

In June, High View Farm’s Linda Geren brought half a hog to Reading Terminal Market for

Cheese Of The Month: Claudio’s Mozzarella