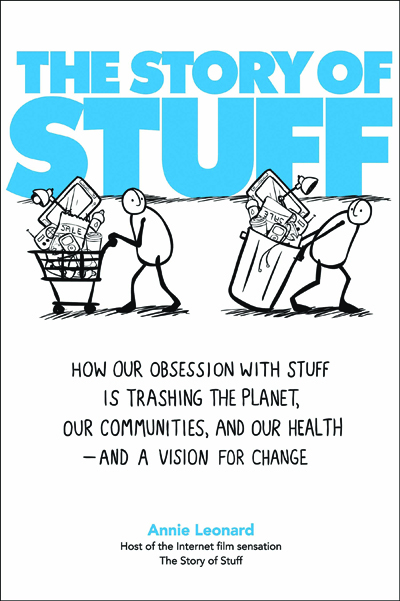 The Story of Stuff: How Our Obsession with Stuff is Trashing the Planet, Our Communities and Our Health–and a Vision for Change
by Annie Leonard
Free Press (2010), $26

The original “Story of Stuff” is a 20-minute animated documentary that took Annie Leonard 20 years of research to make. It’s a brilliantly simple dissection of our society’s relationship with stuff, and now she’s translated her message into book form.

The premise is that most of us have plenty of stuff—phones, cars, jewelry and computers—but know little about where it all comes from, and where it goes when we’re done with it. Leonard uses stick-figure cartoons to illuminate the answers to these questions. Can her appeal to common sense wake us up from our consumer malaise?

The video and the book tell a truth that we all intuitively know: Products don’t magically appear on store shelves before we buy them, and, sadly, they don’t magically disappear when we throw them into the nebulous place known as “away.” Leonard has traveled the world, witnessing ecosystems and communities devastated by mining, workers poisoned in factories and third world countries used as dumps. In one example, toxic incinerator ash from Philadelphia was dumped in Haiti in 1987. Finally, in 2000, thanks to increasing pressure on Mayor Ed Rendell, the ash was removed. But this small bit of justice is the exception, not the rule.

Like the movie, the book is broken into the five sections: extraction, production, distribution, consumption and disposal. Exploitation of people and natural resources is the norm—as is the reckless use of cancer causing chemicals—but the real shocker at the center of the story is that, despite all our stuff, we’re not happy. In fact, Americans reached the peak of their happiness in 1957, right around the time that companies started designing products that are meant to be thrown away.

What makes this book particularly convincing is its sense of perspective. For example, municipal waste makes up only 2.5 percent of the total garbage we produce, while industrial waste comes in at 76 percent. That doesn’t mean you shouldn’t recycle, but Leonard warns that we can’t let small actions distract or satisfy us, because ultimately it’s about systems. As consumers, “there are no ten easy things [to do] that will save the planet,” she argues, but being involved politically, understanding the power of policy and questioning our basic growth-based capitalist paradigm are all essential. Yup, we have to discuss the current state of capitalism to get at the root of the problem. Nobody said this would be easy! —Alex Mulcahy