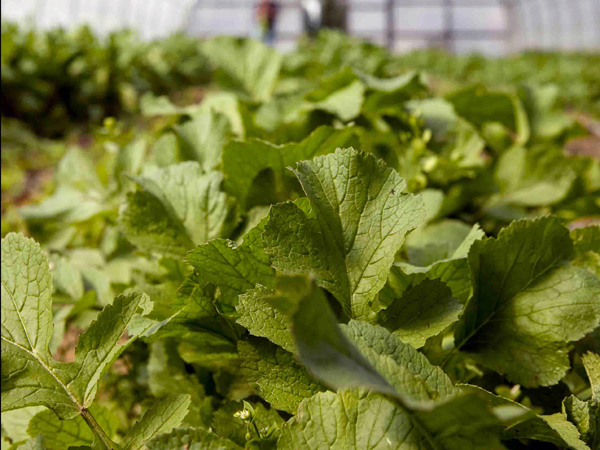 Lancaster County is full of rolling hills, plowed fields and the occasional tall, silver silo; to the average observer, it can all seem the same. With a closer look, though, one plot of turned soil can be radically different from another 50 feet away.

Under a long white structure called a high tunnel, which looks like a half-buried cylinder, and wouldn’t seem out of place in a sci-fi movie about a space colony, Aaron Zook is growing heirloom tomatoes. Though the plants are only a foot or two high when we visited in early April, they’ll soon stretch to heights of eight or nine feet, heavy with unusual varieties of the  fruit. Some will be red and resemble the mostly round supermarket tomato everyone can recognize, while others will look like an entirely different species of plant, sporting hues like purple, green and black and looking more like squash or cucumbers.

Zook’s decision to grow heirloom vegetables, which have gained their unusual properties through generations of breeding by careful farmers, is rooted in the idealism of the organic and local food movement, and the practicalities of making it as a small, independent farmer. Heirloom veggies also serve as a good symbol for the aforementioned movement, because they are unique and connected to a particular farmer, rather than the standardized, mass-produced product of industrial agriculture.

Taking Back the Power

Local food production is, in a lot of ways, about power and control. Ideally, it helps farmers have more control over what they grow, ensure they are paid a good enough price that they can survive and revive the connection between food producers and consumers, which has benefits for them as well.

Lancaster Farm Fresh Co-operative, which Zook helped found, was created to help the farmers of Lancaster County regain that control, as well as grow and deliver healthier and fresher food. “We started in ’06—nine farmers and me sat down on some hay bales in a barn and we were like, ‘How can we work together to get our foods to these different areas?’” says Casey Spacht, General Manager of Farm Fresh. “It’s all about control—your own land and your own products. You lose that control a lot of times just by sending your cases of produce out there for whatever price you can get and you don’t know your customers.”

The co-operative takes a lot of pressure off the small farmer-members and also enables them to get good prices for their crops. Farm Fresh takes care of the marketing and distribution, leaving farmers free to focus on tending their crops and improving their farms. “[Farm Fresh] takes about 50 percent of the work off my shoulders,” says David Fogarty-Harnish, another founding member. “The marketing is taken care of, the trucking’s taken care of; I can just focus on what I’m growing.”

Farm Fresh also negotiates prices prior to when the produce is harvesting, so farmers don’t have to just take whatever price a large distributor will pay them. “Before, I was selling to a large distributor and we just got pushed around a lot,” says Zook. This also guarantees that the food is at its freshest when it gets to the consumer—all of their food products reach their destinations within 24 hours of being picked, or in the case of eggs, laid.

Farm Fresh sets up some orders ahead of time, so farmers can choose to grow certain things they know will sell, and makes further sales throughout the season.

Some of that food goes to restaurants and markets in Philly, like Southwark and Reading Terminal, others to the CSA the co-op runs, and still more to places in New York and Baltimore. Farm Fresh is able to do this because they have the combined selling power of the 50-plus member farms and they negotiate directly with the people buying their food, as opposed to a middleman distributor. The farmers pick and pack the food right on the field and then Farm Fresh picks it up straight from there. In effect, Farm Fresh acts as that middleman for the farmers, but the co-op’s main goal is to get a good price for the farmers, not to increase its own profit margins.

This means Farm Fresh members do very well for themselves, which is partly due to the fact that everything they grow is certified organic and sold to places that are willing to pay more for organic, sustainably-farmed local food.

“I made $10,000 per acre,” says Fogarty-Harnish, “but I think some of the others made $15,000 or $20,000.” He gestures to a neighboring farm beyond his treeline that uses conventional methods (i.e. chemical fertilizers and pesticides). “Most conventional farmers make between $2,ooo to $5,000 per acre.” That’s even more impressive since organic produce farms don’t receive the government subsidies that prop up the massive corn and soybean industries, and often draw the ire of non-farmers.

The farmers gained all these benefits, and still maintain control over how their food is distributed. “[They] have the same amount of say, too, because they own it, they own the co-op,” says Spacht.

The only reason a group like Farm Fresh can survive is with a lot of trust between the members, who are often very culturally distinct, like Zook, who is Amish.

It might seem odd for an Amish farmer, whose culture is famous mostly for being strictly separate from modern America, to join a group with the “English” (their term for non-Amish). However, the Amish culture is steeped in the kind of systems of interdependence and mutual benefit that co-ops need to survive.

Zook looks the part of the Amish farmer: bowl haircut, neck beard, simple black trousers, suspenders, blue button-up shirt and piercing blue eyes. His quiet, humble voice fits with a people who don’t like their picture taken because they don’t want to appear boastful or vain. The only oddity is that he’s lying on a bed with his left leg encased in a cast from an accident where a spooked mule broke it in two places.
Although he expects to be laid up through June, thus missing some of the most important planting and harvesting times for his four-acre farm, Zook is unconcerned. “My brother’s taking over for me,” he says.
Outside of the house where he’s recuperating, his family is indeed quite busy. A thirtyish man drives a cart pulled by two mules, and two women and some teenagers tend starter plants in a heated high tunnel so they can get an early start before the final frost in late April.

The farm itself is on an 80-acre dairy farm owned by his father, which was part of a plot his great-grandfather bought in the ’20s. His family also has a long history of going against the grain in terms of farming methods.

“My grandpa was kind of an oddball—he almost never used chemicals,” drawls Zook, who has a calm certainty when he talks about organic farming. “I wouldn’t use chemicals, even if there wasn’t a market for organic produce. There’s a lot of good research about how bad the chemicals are.”

In another high tunnel, Zook’s family is harvesting baby greens, like arugula and cress, destined to grace the plates of Philly restaurants later that evening. They’re doing it by hand, picking each tuft of green, but Zook asks Spacht if he can pick up a specialized harvesting tool from Fogarty-Harnish, who
has agreed to lend it out.

Spacht happily agrees, because that’s a big part of how the co-op functions: trust between the individual farmers, which can be hard to earn.

“Farmers are naturally very independent, and in our first year we had to work out a lot of trust issues,” says Fogarty-Harnish. When a farm joins the co-op, they give all of their customers to the co-op and sell all their food through the organization, so no member is undercutting another in order to attract more business. He recalled that a previous attempt to form a co-op failed because the members didn’t trust each other.

“They would sell their stuff through the co-op and then go back and call up the same people and try to sell their extra stuff for lower prices,” says Fogarty-Harnish, shaking his head.

Sometimes that means having to make compromises with the other members of the co-op. “We [Farm Fresh] have a lot of say. We want it to be up to the farmer, but a lot of times people want to grow the staple crops: tomatoes, potatoes and greens. We have so many growers growing them that we don’t need any more, so if a farmer comes to us we have to tell them, ‘We can’t take that. You can pick from this, this and this.’”

That can lead to farmers growing new things, which the co-op provides assistance with, like red brussels sprouts, tigger melons, bok choy and minature pointed cabbage.

Helping to run a co-op was a natural step for Spacht, who grew up in Lancaster County and previously ran his own farm in Georgia and a co-operative natural foods store in Pittsburgh. Wearing a Black and Green Press zip-up hoodie (an ecological-anarchist publishing group), he’s equally at home picking radishes and decrying corporate agriculture.

“We’re here for the little guys—the farmers and the consumers,” he says. “Being local and organic is healthier, because there’s no chemicals and you lose half of your nutrients after the first 24 hours.”
It was also a reason for some of the members to get into farming in the first place. Fogarty-Harnish, a tall man with bright eyes and graying temples, had uncles who farmed but had never tried farming before founding Scarecrow Farm 11 years ago.

“I was just an average white guy before,” he jokes. “We were about to have our first kid and I was reading about how everything we put into the soil, like chemicals, goes into the plants and then into us. I didn’t want my children exposed to that.”

Buying from a group like Farm Fresh means you’re not only getting food that meets the USDA organic rules, but supporting a group of farmers who want to take good care of their land for the future. “It’s in our mission statement that we want to preserve the land,” Fogarty-Harnish says. “One of the proudest achievements for my farm is that we haven’t lost a single drop of water.” He points to the lines of green plants that run between his fields and stop rain runoff, which erodes the soil.

It’s also healthier for the farmers. “A lot of conventional farmers have bellies on them from riding on tractors,” Fogarty-Harnish jokes. “You won’t see a fat organic farmer.” You can also eat the food right out of the ground, as we did with some of his baby greens, since there are no chemicals to wash off.
That connection to health and eating is another big part of why these farmers do what they do, how they do it.

Frosty treats to help you beat the heat

Personal Essay: Putting down roots on a patch of land gives others room to grow