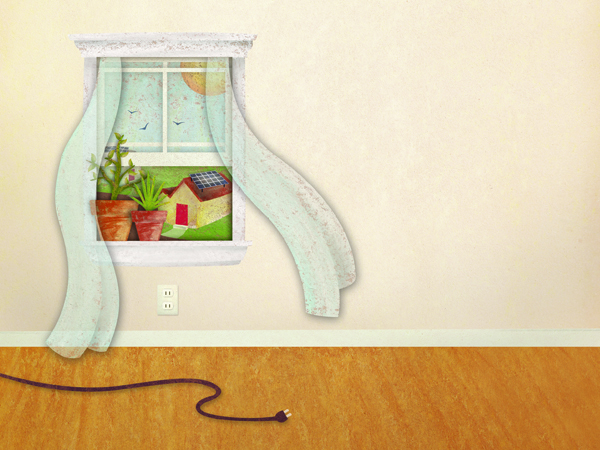 Pennsylvania has long lagged behind other parts of the country in terms of supporting alternative energy and energy conservation. Perhaps because of our massive coal resources, the Keystone State has kept its thinking about energy production firmly in the past. In 2008, after years of pressure from environmental groups and concerned citizens, that began to change, and, if you’re clever, you can take advantage of the new opportunities.

The passage of two pieces of legislation, the Alternative Energy Investment Act (AEIA) and Act 129, has provided a first step to help Pennsylvania, and Philly, switch to clean energy and be more efficient.
“This legislation puts Pennsylvania in the front of the pack in terms of energy efficiency targets… and will help the environment by cutting emissions and creating jobs at a time when we really need it,” says Christine Knapp, Director of Outreach for the Philadelphia office of PennFuture, a nonprofit that pushed for the legislation.

How will it do all of that fun stuff? Well, the AEIA, passed in July, frees up 650 million dollars to support alternative energy and efficiency projects. Most of the money will be distributed by the Dept. of Environmental Protection and details should appear sometime in January. To stay informed, sign up for their e-mail list at: www.ahs2.dep.state.pa.us/aeifsignup/.

Based on details provided in the legislation, we can speculate about how the money will be allocated. One promised program, the Consumer Energy Program, will give out $92.5 million in loans, rebates and incentives to cover up to 25 percent of the cost of energy conservation projects for residents and small businesses. That probably means rebates and incentives for weatherization projects and the purchase of more efficient heating and cooling equipment. So if you’ve been thinking about fixing that gaping hole in the roof, insulating your attic or getting a new heater, 2009 might be the year to do it.

Other programs will offer money for energy-efficient home loans through the Pennsylvania Housing Agency, tax credits to encourage alternative energy production, loans and grants for geothermal and wind energy projects, and loans to businesses, counties, municipalities and school districts for clean energy projects.

Solar power, long the favorite of clean power advocates, also got a boost from the new legislation. It establishes the Alternative Energy Development Program, also known as the Pennsylvania Sunshine Program, to provide $100 million to cover up to 35 percent of the purchase and installation costs of solar projects for homeowners and small businesses.

To help create solar jobs, the Commonwealth Financing Authority (www.newpa.com) will give out $80 million in grants and loans for economic development in the solar sector. Among other things, this could mean money for solar equipment production.

All of that is good news for the burgeoning solar industry in Pennsylvania. “I do expect the industry to boom when this goes into effect,” says Andrew Kleeman, founder of Eos Energy Solutions, a Philly-based solar installation company. “In reality, it is difficult to make solar viable without state rebates and incentives. If you look at any place with a robust solar industry, like Japan and California, they also have a lot of incentives.”

Public interest in clean, local energy is already piqued by the mere possibility of public help. “We’ve got close to 40 customers who want to do solar now,” says Kleeman, “but are waiting for the rebate.”
That people are waiting is telling enough about the public interest in this funding, and also a good tip if you’re considering applying for some of this money. Only projects begun after the funding details are released will be eligible, although you can start talking to a solar provider now.

In September, a few months after the passage of the AEIA, the state Senate began debating Act 129. Amidst soaring energy prices and media attention about expected electric rate increases when rate caps come off, the bill, which focuses on reducing energy consumption, was signed into law on October 15.
The new legislation also created consumption reduction targets that every Electricity Distribution Company (EDC)—PECO in our area—will have to meet, like reducing peak usage four percent by 2012, or face penalties of up to $20 million. So look out for PECO to start offering some kind of incentives or programs to reduce consumption.

Something they definitely will offer–since it is mandated by Act 129–is the option to get  a “smart meter.” What’s so smart about these meters? Well, smart meters track your electricity usage in real-time, and transmit it to your provider for billing, so you can tell exactly when you are using electricity. Along with the meters, EDCs will also have to provide a payment plan that offers reduced rates during non-peak hours. The idea is to convince consumers to use less during peak hours when it is more expensive to generate power, because less efficient methods must be used to fill production gaps.

The original draft of the bill had EDCs covering the cost of these meters but after some last minute lobbying, the ironically-named Consumer Protection Committee, chaired by Sen. Robert Tomilson (R-Bucks), switched the burden of cost over to consumers.

As it now stands, EDCs must file a plan for offering both smart meters and an adjustable payment plan by August 15, 2009. Some time after that, smart meters will be available upon request and most likely at cost to you.

By now you might be thinking, well all this state stuff is all well and good, but, like most Philadelphians, I rarely even leave my neighborhood. What’s going on in Philly?

In April, Exelon, the giant corporate parent of PECO, signed an agreement with German company Epuron to buy electricity from a one-megawatt solar farm–enough for 200 homes–in an empty section of the Philadelphia Naval Yard. Epuron will manage the site, with the blessing of the city, and the project is slated for completion by summer ’09.

If you’re not suffering from legislation sickness, which is like motion sickness but more boring, there is some City Council legislation to watch. Bill 080025 would mandate that all public building projects of 10,000 sq. ft. or more must meet the Leadership in Energy and Environmental Design (LEED) Rating System’s silver level rating, or equivalent standards. Created by the U.S. Green Building Council, the LEED standards require buildings to meet criteria like availability of alternative transportation, reduction of water use, optimization of energy use, and conservation of materials and resources.

Bill 080758 has a smaller focus and would prohibit businesses from keeping their doors open while running their AC, which is sometimes done to entice customers on hot days. For info about these bills go to: http://www.phila.gov/citycouncil/.

With the details on the state’s many new alternative energy and efficiency programs expected in January city’s plans, there’s a lot to keep track of in ’09. For the handful of you who don’t enjoy reading reams of mind-deadening bureaucratic legislation, this year is a good time to make an exception. Taking advantage of these opportunities now could pay off for years and years to come.