Black Birders in Their Own Words

Black Birders Week 2022 was celebrated from May 31 to June 5. This year Grid caught up with three local Black birders to hear their stories. 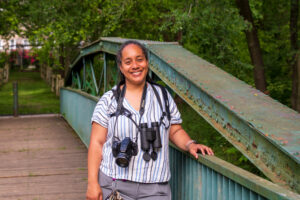 I started birding during the pandemic. Mostly a friend and I were walking. We were like, “We have to get out of the house.” We started walking our own West Philly streets together. We’d walk all the way down to Cobbs Creek park, walk back, and choose another street.

My friend was like, “That’s a catbird.” And I was like, “What the hell is a catbird, and what is it doing in Philadelphia?” I thought she was playing.

And then she was like, “That’s a mockingbird,” and from that point it became a conversation about what is out here that I’m not aware of.

I had never been to Heinz before. I had driven past it several hundred times, and I always said, “I’ll get there someday.” Now I practically live there.

Last year because my school [where Clark teaches] started at nine, I went birding every single morning. And there are several reasons I do it. One is to be outside. I have never felt so connected to the earth, especially in the morning at Heinz. Sometimes it’s just me, some rabbits, an otter, and tons of birds.

I missed the first Black Birders Week. Last year I tried to go onto some of the virtual events. It was exciting at that point. I was starting to hear some of the names of people who were part of it. I said, “This is such a great idea, let me find out more.”

I can’t see a woodpecker without pointing it out to someone. All of these things have been right in front of me my entire life. I went to camp in the Wissahickon. I was a counselor. I saw these birds and didn’t know they were there.

There is wonder out there in front of all of us if we allow ourselves to slow down and look at it. 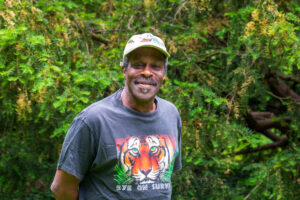 I had been a landscape photographer for years and years. I was really into that. We were planning a road trip from Philly to Maine, to New Brunswick, to Nova Scotia, and then back home. I had bought some new gear, and I was trying to familiarize myself with the new gear, so I was taking pictures in our yard in Germantown. I thought I’d try on the birds, and I had a modicum of success, so I said, “When I get back from the trip I’ve got to investigate this.” So we got back and I really tried to focus on the birds in our yard. I wasn’t having the success that I wanted. So I went to the camera shop, and he said, “You gotta upgrade, Bernie. Stick your hand in your pocket until it hurts.” So I geared up for birding, and it’s been great on a lot of levels.

I started birding before the pandemic and before the whole incident in Central Park with Chris. [Black birder Christian Cooper, who asked Amy Cooper, a white woman, to put her dog on a leash. Amy Cooper then called the police saying, “There is an African American man—I am in Central Park—he is recording me and threatening myself and my dog. Please send the cops immediately!” This went viral and helped inspire the first Black Birders Week in 2020.] I got texts from people all over the country who knew me and knew I had been birding on my own, hours away from home with all this gear, and they were all concerned. I said I had never not been aware of the precarious situation I could possibly be in, but I have a determination that I’m not going to let other folks’ negativity stop me from being my best self and from doing what I need to do. So I just went and I was fortunate not to have any notable negative experiences.

I tend to be a solitary individual. I never felt the need or compunction to be a joiner, and it’s ironic because the In Color Birding Club asked me to become a member of their board, and it’s the first thing in 30 years I’ve wanted to become a part of. I thought the mission was so important to help create a sense of safety in the open space that our ancestors did. My grandparents all come from deep in the woods of South Carolina, and these people were yoked to nature.

We have people who have never birded but who have an interest, and they feel safe because they’re not out there by themselves, and we get kids who are like, “Look a robin! Oh my GOD!” And that’s it, that kind of enthusiasm!

My favorite bird is the bird that’s giving me the hardest time, and right now that’s the kingfisher. I have a catalog of probably 300,000 images. In that catalog I have eight pictures of kingfishers, and they’re not the shot I want. 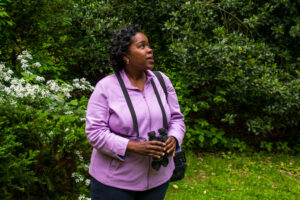 I’ve always liked animals. I watched Wild Kingdom with my mother faithfully as a child and knew I wanted to see animals in the wild. So in some of my travels, I have been on safari, seen orangutans, and traveled to see other animals and natural phenomena. But I also would go to Wissahickon Creek and listen to the creek to give me peace in high school.

I was walking down the trail in Ohio [where Burnett lived in 2012] and I saw a yellow bird, and I thought, “Is that an escaped pet?” And I walked further and I saw another one, and I thought, “Mmm, that’s not two escaped pets. There’s something going on here.” I went on a birding walk, and the rest was history.

And then I moved back to Philly [in 2019] and I was like, “I give up my newfound hobby because there are no birds here.” And so that was it until I mentioned to someone, “I miss birding.” They were like, “You can bird here, go to Cape May.” And I was like, “That’s two hours away.” And they said, “John Heinz.” So I went on a walk, and I was like, “I like this!” I haven’t stopped since.

Colorful birds, big birds, and hard-to-find birds. I think I get the most excited about those. Rails and owls are harder to find, certain quail species. There might be something with a really small population, and I get excited about those. Scarlet macaw is a favorite bird, and probably my favorite lifer ever is the harpy eagle.

I recommend birding for a lot of reasons, but it gives you one good reason to get outdoors consistently more than you would if you didn’t have a hobby like this. You meet some cool people.