Recently my family tried out a new card game, Aqua Marooned! We are big fans of old classics like Uno, and we try out new games from time to time, usually when they end up in the gift pile on birthdays or holidays.

Aqua Marooned! showed up at the Cobbs Creek Community Environmental Education Center, and I had grabbed a deck for the house on a recent visit, along with a center-specific expansion deck. Our 10-year-old snatched the foil packs out of my hand and opened them up.

Inside we found cartoon aliens exploring a world we already thought we knew, the Delaware River Basin. The four aliens, looking a bit like a slug, spider, lizard and fish, were colored in blue, orange, and green. They’ve just landed and have one day to explore Lenapehoking, “the Land of the Lenape people,” which mostly falls within the watershed of the Lenapewihittuck (aka the Delaware River).

Players draw cards featuring bold cartoon illustrations and follow the instructions to win points. For example, the “Observational Vantage Point” card directs players to get as high up above the ground as possible. When players draw the “Trunk Roughness Appraiser” card, the first to snuggle a tree wins.

“We wanted the game to capitalize on discovery,” says Adrienne Mackey, founder and artistic director of Swim Pony, the company that developed Aqua Marooned! “If you’re someone who doesn’t know a lot about nature, it doesn’t treat you like you’re bad. It doesn’t disadvantage you but rewards you for a sense of discovery.”

In 2018 the Alliance for Watershed Education of the Delaware River commissioned Aqua Marooned!, along with an outdoor sculpture project by artist Sarah Kavage, after a call for proposals for art projects that would connect visitors to the work of its 23 member organizations.

We wanted the game to capitalize on discovery.”
— Adrienne Mackey, Swim Pony founder and artistic director

The 23 members range across the watershed from the Pocono Mountains down to Wilmington, Delaware. In addition to geography they vary in a lot of other ways that make cross-cutting projects difficult. Some have physical environmental centers, while others, like the Tookany/Tacony-Frankford Watershed Partnership, work entirely in the community.

Some are run by government agencies, others by private nonprofit organizations. Some are in rural communities, others in the suburbs and several, like Bartram’s Garden in Southwest Philadelphia or the Center for Aquatic Sciences in Camden, sit in the heart of the city.

“What would an art project look like across a watershed with 23 centers that are unique?” asks Teresa Jaynes, project director for the alliance’s Lenapehoking Watershed program. “How can we introduce the idea of art as a methodology to talk about the issues the alliance had put at the front of their goals, like equity, indigenous sovereignty and community engagement?” 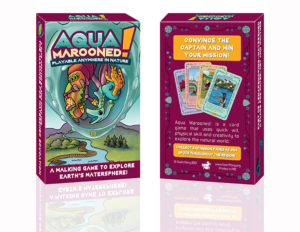 Swim Pony, which had previously produced interactive performance works, submitted a proposal for a game, which they refined as they participated in successive rounds of the competition. As the Swim Pony team talked with staff from alliance member organizations, they noticed a gap in environmental programming. 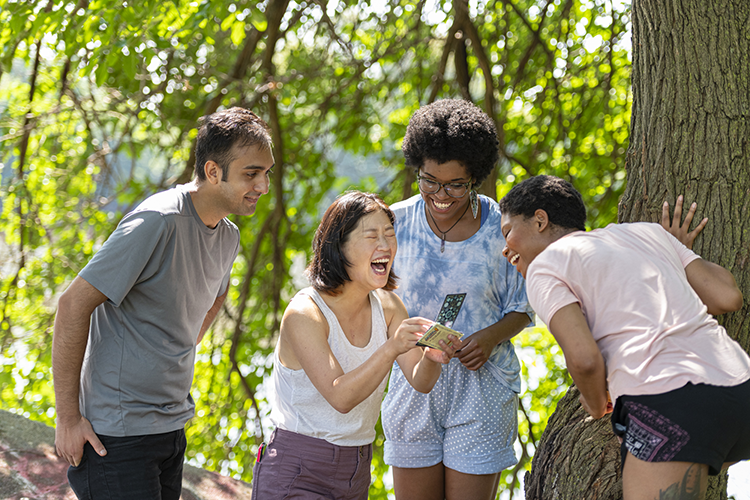 “One of the things I was hearing a lot was that there is a lot of programming for little kids, a lot for retirees, but there is this band of people, 20- to 30-somethings who are active but not necessarily outdoorsy and just don’t go to nature centers,” Mackey says. “Sometimes it’s cultural. If you haven’t grown up going to nature centers you might walk in the door and you don’t know what to do.”

They worked to develop a self-directed game that wouldn’t require additional time from the overworked staff of environmental organizations. “Something you can hand people and they could go, learn about the center, and ideally come back and learn more,” Mackey says.

Swim Pony selected illustrators Meg Lemieur and Bri Barton for the artwork on the cards.

“We wanted date night energy, fun, silly, approachable and not homework. I didn’t want this to feel like art broccoli,” Mackey says.

They also worked with the Nanticoke Lenni-Lenape Tribal Nation as they developed Aqua Marooned!, ultimately producing a Lenape expansion deck.

“They recognized they needed to have someone to speak on Lenape issues to make sure it was a positive representation of Lenape people and culture,” says Trinity Norwood, a citizen of the nation and a consultant for the game.

“Lots of times people want to honor the Lenape people and they might go about it with a positive heart, but they might still make mistakes,” Norwood continues. “A good example is people cover Lenape history but they talk about us in the past tense. We’re still here, we are current people and we will be here in the future. So there are cards in there that talk about what Lenape people are doing today and doing for the environment.”

Aqua Marooned! was supposed to land in Lenapehoking in August 2021, but shipments of the cards were delayed by supply chain issues. They ultimately arrived in December.

Packs are available for free from alliance member organizations. With no plans to print more, Aqua Marooned!’s stay will be brief, just like the aliens’ expedition.

To find a deck, call or visit participating locations. Locations are listed at lenapehoking-watershed-art.com/centers

Budget cuts have shuttered school libraries for decades. A young English teacher has built one from scratch