Luna Lemus-Bromley doesn’t mind getting a little dirt under her fingernails. In fact, that’s what Lemus-Bromley loves so much about gardening. She appreciates that while the end result is beautiful, the road to getting there can be tough.

That’s why she named her gardening business Petal and Blade—to signify the time and effort it takes to produce a lush space.

“Gardening is sometimes idealized,” Lemus-Bromley says. “People think you get to work with flowers and it must be so lovely, and it is so lovely, but it’s also a lot of hard work. You get the flowers because you put in the work.” 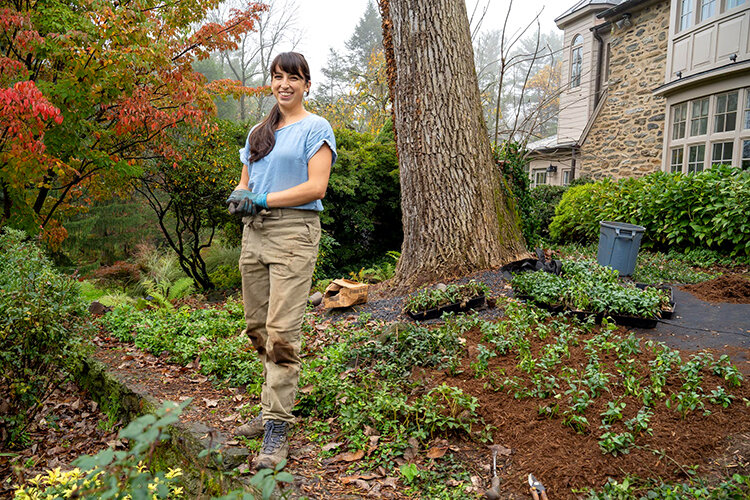 The West Philly resident started Petal and Blade in 2019 and has since been transforming green spaces for residential and commercial clients in Philly and the surrounding suburbs.

Being born and raised in Costa Rica, one of the most biodiverse countries in the world, it’s no surprise that Lemus-Bromley developed a love of greenery and gardening. She says she first got her feet wet with vegetable gardening and remembers planting bulbs before she was barely big enough to hold a shovel.

“We lived in the mountains and we had so many gardens and fruit trees around us, I remember just being fascinated by the blossoms and watching everything transform,” she says.

When she was 10 years old, Lemus-Bromley moved from Costa Rica to Delaware County after her parents divorced and her mom, a Philadelphia-area native, decided she wanted to be closer to her family. In her new hometown, she honed in on her other passion—dance. Lemus-Bromley was 3 years old when she attended her first dance class. Ultimately, she went on to earn a bachelor of fine arts in dance from the University of Michigan (alongside a bachelor’s in international studies) in 2017.

“You get the flowers because you put in the work.”

But after college, she realized she needed “a break from school stuff.” So, when a friend presented her the opportunity for some professional gardening jobs in Hawai’i, she jumped at the chance.

“Hawai’i was the start of my professional gardening. It was just wonderful there. Things just grow so easily and they grow so huge. I mean, there were just tons of lavish fruit and vegetable gardens,” Lemus-Bromley says.

She spent about a year there, and in that time she developed a newfound appreciation for the state and its people, working alongside locals and native Hawai’ians. She says that it was interesting to see the Aloha State through the eyes of a worker and not a vacationer.

It was also in Hawai’i where she learned to work more organically. Being eco-friendly was ingrained in her from a young age, but seeing how locals gardened on the island made “everything click” for her, she says.

“The culture over there was more about doing what you can with what you have, and that aligned with me,” she says. “I loved learning from the locals in that way, where it was just having to make use of what was around.”

While she doesn’t yet have a greenhouse  in which to grow all of her plants from seeds like she did in Hawai’i, she says it’s her dream to someday have one. Until then, Lemus-Bromley does everything within her means to reuse and recycle, and the plants she purchases from growers are organic and don’t contain toxins or pesticides.

When Lemus-Bromley came back to the Philadelphia area in 2018, she moved in with her longtime friend Abigail Meloy. At this point, Meloy recalls seeing Lemus-Bromley put in the time to hone her gardening skills.

“She took various public transportations in order to get to Glenside to go to her job at a gardening shop. I just watched her put all of this effort into better understanding her craft,” Meloy says.

Even though she has a strong love for gardening, Lemus-Bromley says she never imagined starting her own business because the prospect of it intimidated her.

“I’m definitely not a business person, but I talked to a lot of contacts and friends who knew people that have their own businesses, I just kept asking people how they do it, took their advice and then just did it myself,” Lemus-Bromley says.

And when she says she did it herself, she’s not kidding. Lemus-Bromley is currently a one-woman show and has been running Petal and Blade solo for the past two years.

“It’s funny because sometimes clients aren’t sure if I can do it on my own, and I understand. But it’s fun because they’re usually surprised and pleased after the work is completed,” Lemus-Bromley says.

She does have goals to expand, but for now she loves the independence of working solo and being able to take the lead on the planning and design process of her clients’ gardens.

Meloy, on the other hand, wasn’t surprised to see her friend start this business venture and has loved watching Lemus-Bromley grow every step of the way.

Although it’s a lot of work running a business, Lemus-Bromley embraces the heavy workload.

“I love it. I love being exhausted after a day of work. It feels refreshing, physically, as well as mentally because designing and planning all of the gardens is stimulating and it keeps me engaged,” Lemus-Bromley says.

Since she splits her time between the city and the suburbs, Lemus-Bromley acknowledges that her days working in the city are different compared to when she’s working in the suburbs. But Philadelphia has a good amount of green space, she says, and that’s why she loves unlocking the unrealized beauty of spaces for her city clients.

“Some people have small backyards, and it’s nice to see how much potential different spaces really can have,” she says. “You just have to be a little more creative about how you arrange everything and fit it in, but that can be really fun.”

The result can sometimes get people to reconnect with their natural spaces. Lemus-Bromley helps her clients view their front yard as more than just a lawn, and she teaches them how to embrace their green space even if it sprouts weeds.

“Sometimes people pay more attention or notice their own spaces differently when I can tell them what’s growing and what blooms are going to happen at what time,” Lemus-Bromley says. “I think they start connecting with that space as a changing organism, and they also start to realize it’s something that can bring you joy.” 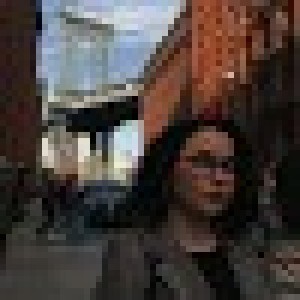 Dear Lois, How does the Capitol riot reflect how people live at home?