Biodiversity? There’s an app for that

On July 16, a female ruby-throated hummingbird drank from a coral honeysuckle flower at the edge of Tacony Creek Park. We know this because an iNaturalist user with the handle “digitalmirage” took a picture of the bird in the moment before it hummed away.

“Recently I’ve been obsessed with hummingbirds,” explains Savannah  McHale (a.k.a. digitalmirage), who grew up in Lancaster County and moved into a house neighboring the park this past spring. “As I kid I would see them for a split second and it would be a magical moment. Now, here we have five or six in the park that I observe every day and get to photograph.” Hummingbirds visit flowers all the time, and there is nothing new about humans photographing them. What is new is the ability to so easily share the observation on a social media app and citizen-science platform like iNaturalist. 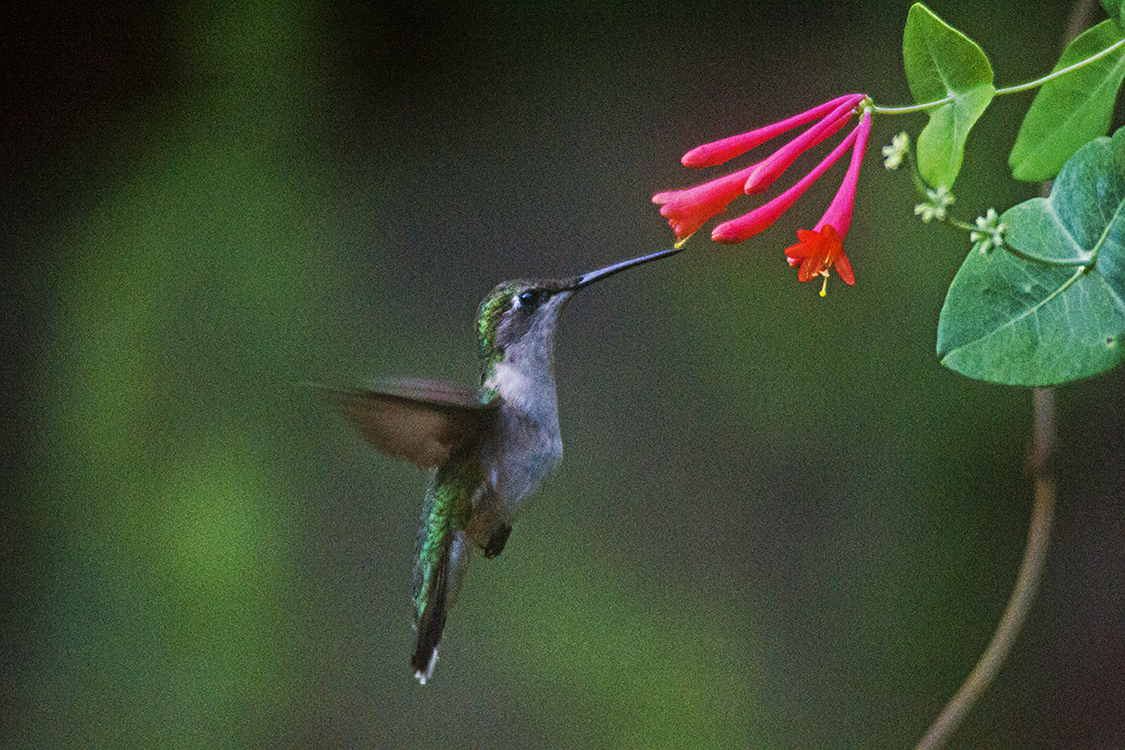 McHale’s hummingbird pic and other observation details were also captured by the Tookany/Tacony-Frankford Watershed Biological Survey, a “project” on iNaturalist  launched by the Tookany/Tacony-Frankford Watershed Partnership (TTF) to collect observations (about 5,400 so far) within the watershed. By documenting that hummingbird’s flower visit, knowledge of the ecology of the watershed is growing as well as the community that supports it.

“We know there are people who are into this, and we would like to transform them into leaders,” says Julie  Slavet, TTF’s Executive Director, who cites Savannah and her husband, Tom McHale (“teemicail” on iNaturalist), as examples. TTF staff noticed the McHales’ observations on iNaturalist and reached out to get them involved in nature walks and restoration work. “We’re a watershed-wide organization,” says Slavet. “The city is downstream, the headwaters are upstream, and our job is to engage people all across the watershed, all different kinds of citizens in things that get them excited.” Slavet points out that the wildlife observations on iNaturalist can help animate the work of volunteers upstream in the suburbs. “This is a chance to get our water-quality monitors to do the same thing. It’s a lot more engaging to talk about that than to talk about nitrogen and phosphorus.”

Robin Irizarry, TTF’s Philadelphia Watershed Coordinator, points to an adult American eel that watershed volunteers found in Jenkintown Creek. American eels breed in the Sargasso Sea. The baby eels then migrate to freshwater to grow and spend most of their adult lives before finishing the cycle back where they hatched. “It’s a really neat thing because it shows the connection between the Jenkintown Creek and the bigger picture of the ecology of the Delaware River and the East Coast.”

Irizarry also highlighted the importance of data from the Tacony, a too-often overlooked natural area. “There are a lot of folks who, for decades, have been looking at wildlife in the Wissahickon or the Pennypack or down at Heinz [John Heinz National Wildlife Refuge]. So this is now getting people to realize you don’t have to go across the city to find amazing wildlife. You can look in your own neighborhood; you can look in Tacony Creek Park, if that’s where you live… or along Jenkintown Creek.”

TTF also holds watershed-wide bioblitzes—events where people collect as many observations as possible in a specific timeframe. Their spring bioblitz, April 21-28, netted 442 observations of more than 184 species, and their recent fall bioblitz, running September 15-22, yielded 860 observations of 279 species, submitted by 80 observers.

Bioblitzes make great competitions, and Philadelphia nature buffs will be taking part in the third  City Nature Challenge in April 2019. What started as a contest between Los Angeles and San Francisco in 2016 expanded to 69 cities and metropolitan areas in 2018. Together they racked up about 442,000 iNaturalist observations by over 17,000 participants.

Of course, with a few taps on their smartphones, users can submit observations whenever and wherever they see a plant, animal or fungus. “We find it is a really good gateway tool,” says Irizarry. “All the kids who are into Pokemon Go, this is kind of a really easy transition to go and explore nature.”

Working Class Heroes: A celebration of the centuries of silent contributions made by Black women

Bike safety photos aim to build empathy on the streets

When I saw that my butcher was calling, I dreaded answering the phone. Yes, when I

Equality on Wheels By Alexandra W. Jones Whether you are riding a bike or navigating life,

Five years ago when I graduated from college, everyone assumed that I would be leaving my

Legal experts weigh in on bike safety and the law

In the last five years, the cycling community has seen 93 major injuries and 22 fatalities