Lucky Ducks: An old coot and a young duckling share an enthusiasm for fowl 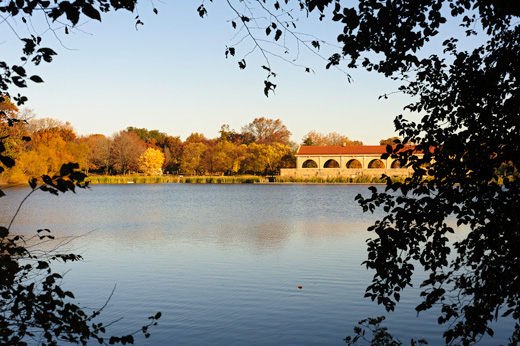 At the end of October, I hopped on the subway to South Philly to observe migratory waterfowl. I took my daughter Magnolia (“almost two,” as she could say at that point) in a stroller. She is a fan of ducks. A yellow one figures prominently in her favorite book, Brown Bear, Brown Bear, What Do You See?, and she likes to point out ducks at the zoo. (Sometimes she indicates a duck, sometimes a goose, but close enough.)

We urbanites are used to white domestic ducks and to the mallards that hang out in anything bigger than a puddle. Then there are the Canada geese — a mix of winter-migrants and pushy year-round residents — and Eurasian mute swans, elegant to look at, but terribly destructive pests in our tidal marshes.

Ruddy DuckFranklin Delano Roosevelt (FDR) Park in South Philly, however, hosts several species of genuinely wild migratory species. These are North Americans uncomfortable in our cities, and they seem somehow exotic compared to the usual gang. Could Magnolia, whose favorite activity seems to be naming all the objects and creatures in her world, comprehend the differences?

According to Tony Croasdale, my birder friend (and sometimes waterfowl researcher) these species fly south from their summer homes to find water that should stay open in the winter. “Meadow Lake is a remnant of the many lagoons, backwaters and marshes that used to line the lower Delaware River,” says Croasdale. They were coming to South Philly long before it was cool.

We exited AT&T Station and walked away from Citizens Bank Park (not an easy impulse to shake). As soon as we made it to the west side of Broad Street, we were there. Philadelphia ain’t the Everglades, but we can still check out wildlife for the price of a SEPTA token.

FDR Park hosts a golf course and all the usual urban park amenities: asphalt paths, ball fields and at least one playground that demanded a 20-minute stop before I could lure Magnolia away to see “the duckies!” at Meadow Lake, a weedy pond with a concrete walkway along its west bank. 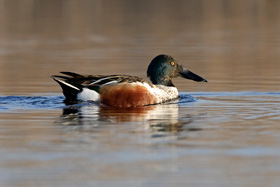 Northern ShovelerI quickly downgraded our learning objectives for the trip. The migratory duck species present were easy to tell apart through my binoculars: We had endearingly plain gadwalls, northern shovelers with tan sides and long bills, ruddy ducks with fluffy black-and-white heads and tails held up at a snobbish tilt. Now, Magnolia is clearly the smartest kid in Philadelphia, but she hadn’t mastered binoculars quite yet (my fault — not enough practice). To my naked eye, the ducks were kind of different. To Magnolia they were all “duckies!”

Luckily, we had the coots. These black birds with white beaks were definitely not ducks, and they were conveniently close to us. “Coot!” was also the most fabulously fun word Magnolia had ever pronounced. After a few minutes, I could point to the ducks for a “duckies!” and then get a “coot!” when I pointed to the other birds. Mission accomplished.

Bernard Brown is an amateur field herper, bureaucrat and founder of the PB&J Campaign, a movement focused on the benefits of eating lower on the food chain.

Using the Miyawaki Method to Rewild Our Communities

Global futurist Jack Uldrich: A sustainable economy will require unlearning what we think we know