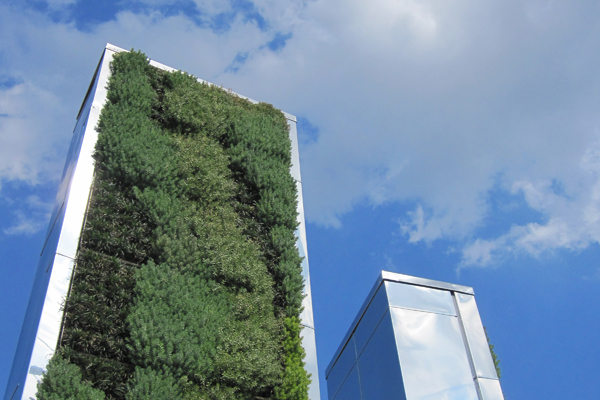 Mural Arts, one of the city’s strongest advocates for public art and community development, is expanding its reach. “RE:flect,” unveiled June 10 at the corner of 38th and Powelton Streets in West Philadelphia, is the city’s first “green wall” sculpture.

The two adjacent towers were designed by Florida-based artist JEFRË in conjunction with students from Sayre High School, who spent time exploring the confluence of environmentalism and public art. As the artist explained in his presentation, the sculpture draws inspiration from the Schuylkill River and its power as a gateway to West Philadelphia. At its simplest, the structure is two vegetative edges, framing a reflective surface—a powerful invocation of the beloved waterway. The plantings will change seasonally.

At the unveiling, Mural Arts Director Jane Golden spoke passionately about the impact art can have on communities—both through beautification and the involvement of local youth. “Our mission is about providing people access to community public art,” said Golden. “It’s about looking at the intersection of art and social change.”

This particular project is a collaboration between Mural Arts, Sustainable Communities Initiative West (Enterprise CDC, Partnership CDC, People’s Emergency Center CDC and University City District) and United Bank of Philadelphia (the sculpture is on the corner in front of the bank’s West Philly branch).
Golden reflected on the transformations wrought by Mural Arts since its first incarnation as the Anti-Graffiti Network. “There’s a saying,” she said. “Hope is succeeding in spite of the evidence, and then watching the evidence change. We have seen that in every neighborhood and community in the City of Philadelphia, and we have seen that in young lives. That is truly what drives us forward.”

The Energy Issue: Get Smart

The Energy Issue: Get Smart

The PECO rate caps are about to expire. Are you ready?story by Samatha Wittchenillustration by Michael

The Energy Issue: This Year’s Model

Dispatch: Battle of the Bulb

essay and illustration by Jacob LambertEnvironmentally speaking, there are a few things i’d like to experience