From the Editor: Year One 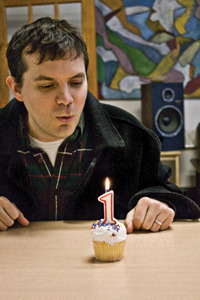 It’s time to celebrate, Grid is turning one! In honor of this occasion, we’re throwing a party at Yards Brewing Company on Saturday, April 10 from 5 to 8 p.m. (see inside back cover for details). We would love if you stopped by, had a beer and said hello.

I suppose this is a time for reflection, something I’ve had little time to do since this magazine’s inception. “Lurker” is a term used to describe a person who reads a message board but never contributes. And, for years, that’s more or less what I was in the sustainability community. I would go to forums at the Academy of Natural Sciences, often dragging a less-than-interested friend. Once inside, I would occasionally grab their arm and exclaim things like, “Oh my God, I think that’s Christine Knapp! From Penn Future!” I was like a 12 year old at spring training. I spent my spare time scouring local newspapers, trying to get a clearer picture of the major players and their goals. During this period, I was lucky to discover Will Dean, a journalist who regularly covered sustainability issues for the City Paper. Together, we put together a prototype. I was no longer a lurker.

Turns out entering the fray was less like testing the water, and more like stepping into the eye of hurricane.

Last August, I got married—I know, a great idea during the first year of a business. The reception was a whirlwind: It was all pivot, embrace, “Thanks for coming,” repeat. This entire year has been a similar experience. I was ill-prepared for the avalanche of email, the all-caps messages (I LOVE YOUR MAGAZINE!), and the infectious enthusiasm of the many, many people who wanted, in some way, to be a part of it.

The sustainability elders—the movers and shakers who I would name if I didn’t fear leaving someone off the list—were all accessible and helpful. They were not only patient as I learned my DVGBCs from my DVRPCs, but often suggested story ideas as well. They’ve had high hopes for Grid, and I hope we haven’t let them down.

Let me also thank the brave few who advertised in our first issues. There were many people who liked what we were doing, but were sure that, like many other independent publications, we were doomed to fail. The recession didn’t help. I’ll always feel grateful to the folks who believed enough to invest early.

While I still see many places for us to improve, it thrills me to look at this issue and see at its center a Philadelphian as inspiring as Nic Esposito. “Farming melds two parts of my personality,” he says in the story (p. 12). “I want to work hard and I want to be part of something bigger than myself.” You might not be ready (yet) to quit your job and devote yourself to urban gardening, but you can certainly grow something, no matter where you live.

Inspiring people to act and get involved is what I’ve always wanted Grid to do. “Lurking” is a good way to start, but it’s much more fun when you take a chance, challenging yourself in new ways. As Paulo Coelho writes in The Alchemist, “When a person really desires something, all the universe conspires to help that person realize his dream.” One year into Grid, I can’t disagree.

One last thing: As my employees can attest, I think it’s incredibly important to prepare Philadelphia for the expiration of PECO rate caps on January 1, 2011. (Really, I can’t stop talking about it.) Next year, energy prices in our area will increase by as much as 30 percent. In coming issues, Grid will be shining a spotlight on the things we can do to prepare for this change—whether it’s making our homes more energy efficient or explaining alternative energy solutions.

p.s. A few weeks ago we launched our blog, The Griddle, to keep you better informed about all things sustainable. Stop by gridphilly.com and let us know what you think!

From the Editor: Handlebars and Hops

A Farewell to Pork… and Beef… and Chicken…

From the Editor: The Pleasures of Slow Food