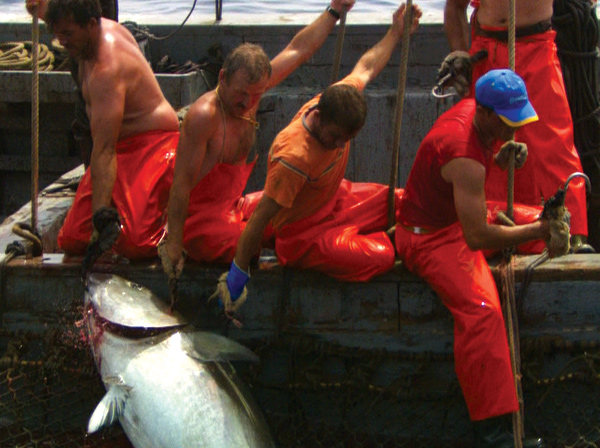 directed by Robert Murray | reviewed by Lee StabertThis film is available on DVD (including through Netflix). For information, visit endoftheline.com.

The End of the Line is a disturbing portrait of what commercial fishing technology (paired with an increasing consumer appetite) has wrought in our seas over the last 50 years. According to Robert Murray’s film, global, edible fishing stocks will be exhausted by 2048.

This is a film about overfishing, plain and simple. Other issues confronting our global fish populations (pollution, decreasing water quality, disease spread from farmed fish) are only mentioned briefly. That focus gives the film a tight, logical momentum.

The hero of our story is Charles Clover, former Environment Editor of The Daily Telegraph in London, a man with enough heart and gravitas to serve as the film’s emotional center. The End of the Line was inspired by Clover’s book of the same name, and throughout the proceedings we return to him as he discusses international regulation efforts, illuminates shocking statistical predictions and pesters world famous sushi restaurant Nobu about serving blue fin tuna, a species he likens to white rhino or snow leopard in its proximity to extinction.

The End of the Line has a truly global scope—from the devastating effects of the dwindling cod population in Nova Scotia (what does a community do when the motivation for settling there disappears?) to scarcity in West Africa, where fishing rights sold to corporate interests are devastating local fisherman, to the demise of the centuries-old bluefin tuna fishing tradition in the Mediterranean. There is one graphic in particular, showing the spread of commercial tuna fishing since 1952, that underscores the staggering, widespread nature of this crisis.

If the film has a weakness, it’s an overreliance on dramatic music and swooping action shots. Murray’s message is scary enough without the menace of bombastic B-movie swells. There is also a bit of a conflict between the onslaught of dead fish shots, meant to evoke disgust and horror, and the film’s subsequent call to treasure traditional fishing practices and rescue the communities that depend on them—all fishermen kill fish. Murray also doesn’t do too much naming of names (Nobu, Mitsubishi, the world’s top bluefin buyer, and communist officials in China who fabricated yield numbers are the notable exceptions), leaving the film with few clear villains.

The End of the Line is an intensely sad film, and also an important one. The sea sustained mankind for millennia, and in the last 50 years we have wreaked havoc on this vital ecosystem. Mankind has to change the way we fish—and the way we eat—if we hope to rescue our oceans from the brink.

Media: A Place of My Own: The Architecture of Daydreams