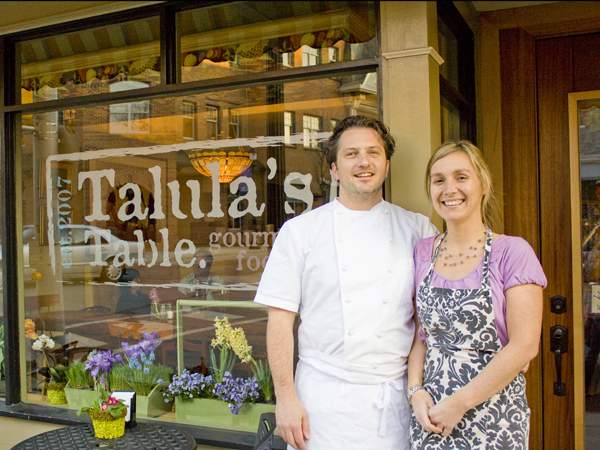 For the staff at talula’s table, a gourmet market and caterer in Kennett Square, hospitality is not perfunctory—it’s heartfelt and natural. Aimee Olexy and Bryan Sikora, the hands-on husband and wife owners (she manages the market, he runs the kitchen), seem to truly enjoy their customers. That might seem like a somewhat tepid compliment, but when paired with their formidable culinary talents, it’s what propels the market in a sleepy Chester County borough into a gastronomenon (consider that term coined).

A large part of the appeal for customers is the owners’ commitment to fresh, local and organic ingredients. It starts in their home garden, where two raised beds produce a sizable seasonal crop for the restaurant. Serving 16 diners a night instead of 160 allows the kitchen to be more flexible and creative about utilizing specialty and small-batch produce. Sikora has built a network of small but dedicated farmers who appreciate his commitment to quality. He’s even cultivated a relationship with a market customer and turned some excess greenhouse space into a unique micro-greens laboratory. They’re currently producing mache, mizuna, watercress and mustard greens, their delicate forms belying the big bursts of flavor inside.

The greenhouse connection is one example of Olexy and Sikora’s innate community building instincts. Using the market as their forum, friends become customers, customers become friends. Customers become vendors, and vendors become customers. (Full disclosure: Customers who work for magazines are smitten and compelled to write profiles against their better judgment, as writing is a bit like pulling teeth for them.)

Their inherent openness aside, actually landing a seat for dinner at Talula’s Table is no easy task. First and foremost, it’s not really a restaurant. The gourmet market opened in 2007, running a brisk trade in specialty coffee, homemade bread, carefully selected cheeses, prepared foods and more. While the charming environment and free wi-fi invites breakfast and lunch patrons to sit and enjoy their fare, it’s all strictly self-service.

From the beginning, Olexy and Sikora, who used to run the award-winning Django in Philly, planned on offering limited BYOB tasting dinners. Sikora wanted to keep his hand in the “plated food” realm, and since the market closed at 7 p.m., their evenings were available. Within a month of opening, they invited a few regulars to visit the market on a Saturday night for an eight-course event. Hearing Olexy describe how she needed to convince anyone to attend is ironic, as the “Farmhouse Table Dinner” has been subsequently described by Conde Nast’s portfolio.com as the “toughest table in America.”

The table that gives the restaurant its name (handmade by Olexy’s woodworker uncle) seats about 12, and the reservation system operates as follows, per the market’s website: “Reservations are accepted by phone for the first caller each morning beginning at 7 a.m., for exactly one year in advance to the numerical date.” It’s the fairest system they could devise for what’s evolved into a culinary phenomenon. Destination diners, their appetites whetted with anticipation, regularly travel from Philadelphia, New York and even Chicago, turning a dinner reservation into a food vacation, staying in local B&Bs, and touring the culinary and creative resources of the scenic Brandywine Valley.

Fortunately, my foodie neighbor is a frequent customer of the market at Talula’s, regularly making the trek for their baguettes (best in the area, by his estimation, and I tend to agree), homemade smoked sausages and artisan cheeses. He’s built up a rapport with the staff, and eventually scored us an invitation to experience the tasting menu from an even more exclusive vantage point—inside the kitchen. Sikora and Olexy created this secondary invitation-only seating option to accommodate friends and regular customers who were excluded by the incredible demand for the Farmhouse Table. While the price tag is considerable, how could I say no to such an incredible opportunity?

Our party of four arrived on a pleasant Thursday evening in early April. After enjoying a glass of bubbly and some choice hors d’oeuvres (duck breast with mushrooms and garlicky ramps were a treat) in the market, Olexy guided us back into the kitchen. The staff could not have been more hospitable. Sikora was casual and knowledgable, explaining the origins of each dish in vivid detail. Olexy is a consummate hostess, with an encyclopedic knowledge of wine and cheese, and together they create an air of cool confidence.

Everything we sampled, like the selection at the market, was unique, handcrafted (both by the ingredients’ producers and Talula’s staff) and often sourced locally. The care, time and effort it took to create this meal were reflected in its taste, and demonstrate the benefits of fresh, local food created by artisans.

To start, we savored smoked rockfish, plucked from the smoker an arm’s length away in the kitchen not long after it was plucked from the waters off the Delaware shore. A seared scallop soon followed with a curiously delicious lettuce sauce, topped with house-smoked bacon and a revelation in corn meal: Anson Mills’ golden heirloom polenta, cooked to a creamy, risotto-like consistency. We enjoyed the tender goat cheese gnocchi, their delightful texture balanced with a sweet sherry butter sauce and earthy, morning-picked mushrooms. A tender medallion of pouisson, paired with fiddleheads and fingerlings, was poetry in poultry.

Talula’s staff moved like a well-oiled machine. Their sous chef, a veteran of the Django years, makes the trip from his home in Philadelphia every day. There is little turnover in their exceptional service staff, and they’re committed to training interns from local culinary schools, giving young and talented people an incredible opportunity to learn. Some might make the transition to working in their as-of-yet unnamed 50-seat restaurant and bar opening across the street in late summer/early fall.

Spring lamb from the nearby Birch Run Farm couldn’t be confined to one preparation. It arrived in three tasty variations: harissa-glazed lamb loin, a lamb and rice croquette with ras al hanout, and lamb confit with tamarind glaze. The cheese course followed a similar theme, featuring “sheep milk cheeses from near and far,” including an irresistible ooey gooey French Le Brebiou, a firm dante from Wisconsin Sheep Dairy Coop and New York State Ewe’s Blue.

The calm camaraderie in the kitchen and the parade of delectable courses can lead even the most vigilant reviewer into a sated glow. Our final course, a Meyer lemon egg cream, properly epitomizes the Talula’s experience in a nutshell (it was actually served in an eggshell): simple ingredients, impeccably prepared and artfully composed, served with a smile.

Grid’s picks for artisan offerings at your neighborhood market