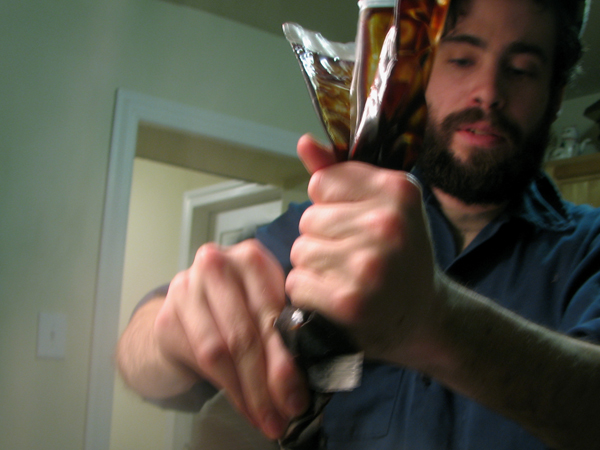 How to make an old-time Philly brew
by Will Dean

Winter might seem like a time for shutting down and hibernating, but it’s also a perfect time for making a little something to help pass the cold months more easily. Here’s a simple recipe for a porter—a dark, malty beer that has a long tradition in Philly dating back to Revolutionary times—from George Hummel of Home Sweet Homebrew.

Fill the pot three-quarters full of water and bring to a boil. If you are using any whole grains, mill them, put them in a muslin bag and soak the whole thing in the pot for 30 minutes. Remove the pot from heat and take the grains out. Add your malt extracts and stir until they are completely dissolved.
Add the bittering hops. If you’re using hop pellets, as we did, just toss them in, but if you’re using whole hop flowers, put them inside a muslin bag. Boil for 60 minutes. Add the aroma hops in the last five to 10 minutes.
Remove the pot from heat and let stand for 15 minutes. Cool the pot by placing it in a larger pot with cold water and ice, until it reaches room temperature. Then transfer the mixture, called a “wort,” to the carboy, either by pouring it in through a funnel or using a tube to siphon it. Add enough water to make it five gallons.
Then mix your yeast with room temperature water (if it’s dry yeast), and put an airlock on top to let out the CO2 the yeast will produce in addition to alcohol.
After a week or so, transfer the mixture to another carboy and let it ferment for another two weeks. Then add three-quarters of a cup of dextrose (so the yeast can make some natural carbonation), bottle it and let it sit for another two weeks.
Drink.
One of the biggest problems in home brewing is contamination by bacteria that can turn your beer into a vinegary mess, so make sure all of your instruments are sterile, especially when you transfer the wort to the carboy. For more info, check with a home brewing shop or try the Complete Joy of Homebrewing by Charles Papazian.

Recipe: Succumb to the temptations of homemade strawberry pie