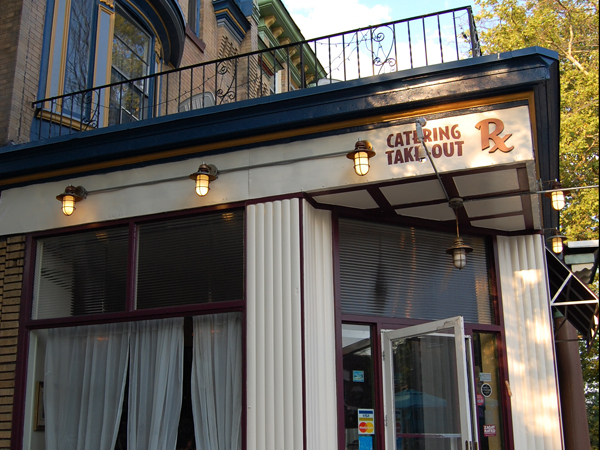 When Greg Salisbury opened Rx restaurant in University City, almost no one in the Philly restaurant industry was thinking local. “When we started in ’01 there was only one other restaurant doing this,” says the laidback and laconic Salisbury. “My first exposure to a CSA [Community Supported Agriculture] in 1997, at 17th and South, caused a revolution in the way I thought about food, and I knew if I started a restaurant it would revolve around local food.”

In seven years, things have changed in the Philly food world, but Rx’s local focus hasn’t.

Rx is so in touch with the variety of local food available in Philly that their menu changes daily, depending on what local farms are offering. “They call me and send me the list and we pick from it,” says Salisbury, who gets a lot of his food from the Fair Food project and directly from farms or local specialty shops.
When I stopped in last December, Rx’s menu featured trout from the Poconos and chicken from Bell & Evans in Fredericksburg. Most dishes featured vegetables from Green Meadow Farms in Gap, PA, and herbs and greens from Overbrook Farms in Lansdale.

One dish, heirloom tomato salad, attests to the power of our localized food systems. Featuring at least four different kinds of fresh toms with wildly different tastes and texture. The astonishing variety in just one kind of vegetable proves small farm foods are anything but limited.

Small, pale pink tomatoes burst with sweet juice, mottled purple ones were cool, rich and kind of chewy, while a yellow heirloom had a shade of lemony tartness to its flavor. Fresh mozzarella from Claudio’s in the Italian market and slivers of basil added creamy and sharp tastes to round out this simple but evocative local salad.

Local food has become more popular in Philly, as well as the rest of the country, and, consequently, the rise of interest has made Rx less of a niche destination. “Not as many people come in just for the local aspect,” says Salisbury. “There’s not as much novelty to saying that we’re all local; it’s almost expected now.”

Rx has a firm footing thanks to its long-term championing of local food and the understated class and deliciousness of its creations (also, their dessert menu is as long as the lists of appetizers and entrées combined). Their eco-cred goes way back, too. “We were recycling plastics before the city even did that. We’d separate the ones and twos, bag everything up and cart it down to the Firehouse [a recycling pick-up point at 50th and Baltimore],” says Salisbury.

Even the art on the casually fancy walls is from local artists who do not have gallery space, which, along with the subdued Sufjan Stevens playing on the stereo, makes the place a favorite of young professional couples. The interior is fitting for an impressive date, with low lighting and mostly two-person tables. In fact, it’s so swanky-looking that me and my scruffy beard were not completely believed to be a journalist and a journalist’s beard. Fittingly, the cost can be steep—entrees range between $20 and $30—but the food is delicious and the brunch offered on Saturday and Sunday is reasonable at $7–$12 .

The goodness of Rx lies not only in its personal food quirks, but in the way it reminds us how much variety our small area supplies. The names of local farms and food producers are listed on the back of Rx’s menus and help connect your French toast back to the living world that produced it, which is what local food is all about. ﻿