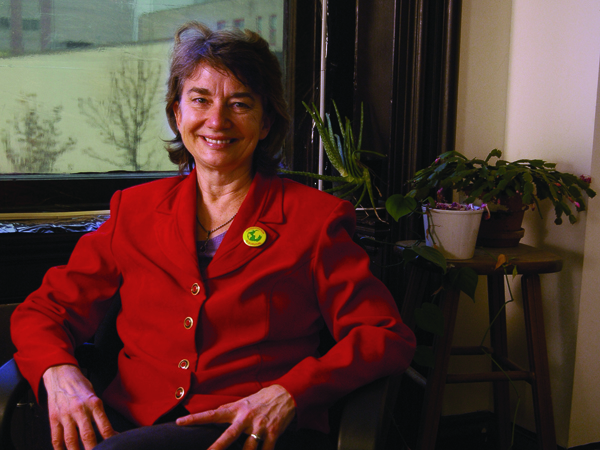 Liz Robinson has been helping Philadelphia conserve energy since 1979. As Executive Director of the Energy Coordinating Agency, an energy nonprofit that services low-income residents, Liz has worked on the Energy
Efficiency Resource Standard, which instituted early efficiency measures for Philly’s affordable housing. She also founded the Keystone Energy Efficiency Alliance and, in the late 90s, she administered the Philadelphia Million Solar Roofs Partnership. Currently, Liz sits on the Sustainability Advisory Board, which counsels Mark Alan Hughes.

GRID: What are the biggest problems facing Philadelphia in terms of energy?
The price of energy has become a real problem. The average price of energy, including heating, water heating, electricity and water, is more than $4,000 a year. That’s quadrupled from where it was 15 years ago. We’re also seeing for the first time that the majority of delinquency [in paying energy bills] and termination [for utilities] is not among low-income people—it’s actually now in the middle-income sector. That group and elderly people on pensions are being really hard hit.

What would you recommend for people who are having trouble paying their bills?
The best defense is conservation. Energy conservation and efficiency reduce your bill immediately and reduce it permanently. Philly’s full of very old and very inefficient buildings. We’ve never [inspected] a building that didn’t have a [potential] 20 percent reduction. Many buildings have a [potential] 50 to 60 percent reduction, so it’s very cost-effective. What we’ve been working on is state support for energy conservation. This past six months, two very important pieces of legislation have been passed. In July, the legislature passed what is now called the Alternative Energy Investment Act. We will see programs on the street by the end of the calendar year. That is in addition to the federal tax credits, which were just renewed. In combination with the state funding, it’ll be more affordable for people to make the energy efficiency upgrades to their homes.

Why do you think energy prices are going up so much lately?
I think peak oil is real and all of the world’s geologists say that we are at peak. Once the Saudis and everyone else are pumping as much as they can out of the ground, despite incredibly high prices and personal pleas from George Bush, no one could increase production, and they tried. I think we’re at the physical limit of what can be pumped out of the ground. The combination of the United States ignoring this problem—sticking our heads in the sand and continuing to consume more and more each year—[and] China and India and other countries really starting rapid development of their economies has created demand that is not sustainable and that’s driven prices up. The solution for this country is to create a new energy future not just for ourselves, but for the world, because the world looks to this country. Everyone follows our lead, and we have been leading everyone over a cliff. We need to stop that and create a path towards a clean energy economy that is affordable for everyone. The central pillar of that has to be lowering demand; there is not enough clean energy to replace the dirty energy we’re using now. Fifty-one percent of the entire clean energy resource in the U.S. is energy efficiency and conservation. It’s bigger than solar, wind, biomass, biofuel [and] geothermal rolled together. You don’t hear people talking about it, but that’s the reality. Unless we rapidly reduce our consumption and reduce our demand for energy, we can’t control price. When the economy comes back, the price is expected to spike and that kind of price instability is really bad for people. It’s very disruptive. Energy prices need to come down and stabilize at a lower rate, and once they do that the economy can be restored.

We’re going to have a new president soon. What do you think he should do to help alleviate America’s energy problems?
I think there’s already a lot of discussion about another stimulus package and about weatherization. With the bailout package, the funding for Weatherization Assistance Program was increased and now there’s talk about further expanding it. Obama has talked already about weatherizing a million homes a year. There already is more talk in Washington about climate change, which you’re not hearing about in the media, but there’s a lot more talk about curbing carbon emissions, and a lot of that comes from buildings. So finally, we’ll see attention paid to efficiency in buildings.  ■+