Hoping to encourage the thoughtful development and deployment of new technologies across the city, the Kenney Administration formed the SmartCityPHL initiative within Philadelphia’s Office of Innovation and Technology (OIT) in 2019. The SmartCityPHL steering committee formed that year as well, tasked with creating a roadmap for using technology to support the City’s economic, social and environmental goals.

But three years in, how is our “smart city” doing on its quest to ensure sustainable and equitable development and maintenance of Philadelphia’s infrastructure, from roads and waterways, to buildings and utilities? Grid’s Nic Esposito sat down with the City’s chief information officer, Mark Wheeler, to find out.

This interview has been edited for clarity, length and style.

What is OIT’s vision for a smart Philadelphia? The long-term vision is that a smart city could be the organizing principle within city government. One that coordinates and integrates the objectives and the operations around workforce development, urban planning, resiliency and mobility in a way that creates a more economically sound, socially diverse and sustainable city. A city that is a very satisfying place to live in for all of the residents.

We want to put people at the heart of the technology programs we’re working with.”

We want these programs to be locally sourced, or locally inspired, meaning that we’re solving problems that Philadelphians are having rather than adopting some kind of program that is focused only on the technology and not existing social or economic issues.

We want to put people at the heart of the technology programs we’re working with.

How does this vision influence or affect Philadelphia’s infrastructure development and maintenance? The smart city definition is that you’re using data that’s collected over a long period of time to help you make decisions or to guide and direct operations to make them more effective.

An example is what we’ve done recently with a Charlotte, North Carolina, company called GoodRoads that we did a pilot with in 2020 through 2021 that may soon become a permanent program. GoodRoads put sensors on existing City vehicles, so it didn’t cost a lot to put them there. These sensors measured the roughness in the road as a vehicle drives, so we knew exactly when the vehicle hit a pothole. GoodRoads also put in optical sensors that can record general road conditions. They were trained with machine learning to identify cracks in the asphalt, uneven roads or decaying asphalt. That information fed into how the Streets Department determined which roads needed to be repaired, and how bad they were. That sensor data was then paired up with what we call our “stress index”* that further helps prioritize roads in communities that have typically been underserved by the City.

The normal way that road condition assessments are done is by engineers in vehicles driving around doing a visual assessment, recording information and then having to analyze it. The sensors cut that work time in half. With the machine learning we get the analysis much faster and we are able to then know how well our repairs are working. Based on the data we collect, we can very quickly see how well the repairs are lasting and know if we need to try out new materials or methods that might last longer. And that’s where I see the value.

How can the data gleaned from this SmartCity approach increase sustainability goals, particularly on our infrastructure? We’ve done a couple of pilots that haven’t necessarily used sensors, but they used more analytical techniques and technology. One example is the construction waste problem in Philadelphia. How do you divert that waste? You need to identify it in the waste stream and then connect all of the individual entities that do reclamation around the city, so they have a more predictable view of what’s in the waste stream.

The Amsterdam-based firm Metabolic was selected as the first SmartCityPHL pilot in 2020 to address this problem. Metabolic has its own “urban mining” tool which is designed to mine the existing municipal and commercial waste streams for resources for recovery as feedstock into manufacturing or reuse programs, instead of extracting virgin resources to create products.

Urban mining is valuable to creating a circular approach to building and construction. It evaluates existing opportunities to reuse materials sent to landfills or embedded in existing buildings — like window frames, ceiling tiles or doors. Metabolic worked with OIT on a pilot to test an approach for mapping upcoming building needs and matching availability of recoverable resources in the construction and demolition waste stream and how to align to local, logistical supply chains. The pilot produced some data-driven insights into the demand and supply as a means to encourage the construction and demolition sector to redirect reusable materials and minimize demand for new construction materials.

I saw something like this in Rotterdam in the Netherlands where they took dredged material from their port and then used it as fill for other development projects. These waste exchange ideas have been around for a long time. I worked on them decades ago, and I can tell you that it was really hard to make those connections because the information was old by the time maybe somebody needed it. So unless the timeline synced up you couldn’t necessarily get the extracted waste material to use as a feedstock in a new construction project. By using data, you know if there’s going to be a demand or what type of material is in the supply and you’re just linking that up.

What do you say to the average Philadelphian who hears about sensors and video cameras being used by the government all over the city and has privacy or surveillance concerns? We take steps before we’ve done any pilot to pull very smart people together from law and academia and the private sector who understand the implications around how AI and sensor technology can work beneficially to give us feedback and recommendations on how to work with our partners to make sure that we’re not capturing data that contains or could extract personal information in ways that could be hackable. 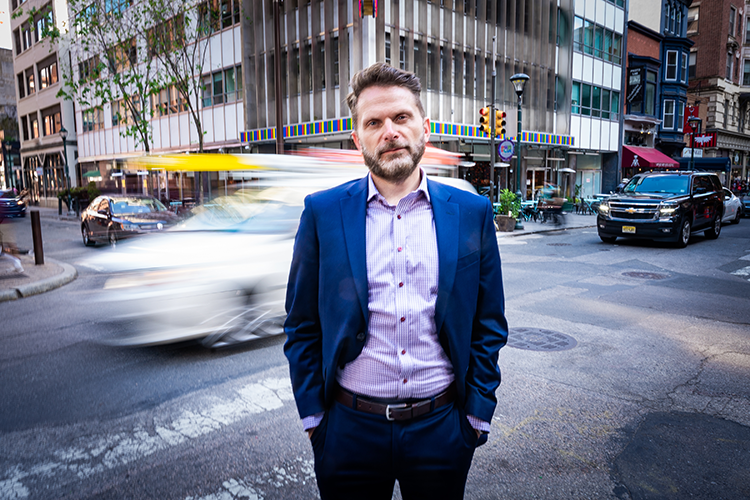 For instance, we have sensors on 13th Street between Chestnut and Walnut. They’re not cameras in the traditional sense being that they don’t take pictures of people’s faces. The information is processed very quickly and what the City gets back is never images, it’s just counts of people or cars and vehicles in the roadway. And that’s what we want it to do. We want real-time information, 24/7, about the capacity of the sidewalk and the streets. Because it’s structured in a way that doesn’t retain information or capture faces, it’s not a hackable image that can then be reused to track people.

But you have to be purposeful about that.

There was a pilot at Eakins Oval in 2018 where we were counting people at the oval by sensing cell phones moving around the park. That technology at the time could retain what we call MAC [media access control] addresses on the cell phones and if they were stored, then you could have seen which MAC addresses were coming and going, and how frequently.

That’s a learning lesson for a city because you do not want to store that information and you don’t even want to be using MAC addresses to count people. When it comes to SmartCity, we learn sometimes by doing and that’s why we strive to think through the technology and the data that’s being stored and how it’s going to be used as much as we can before we implement projects. And thankfully, we’ve had really great partners in the nonprofit and private sectors to work through all of these concepts with us and make changes as we discover issues.

*The Philadelphia stress index is a mapping tool that shows which neighborhoods experience different kinds of stressors such as poverty, health, education, employment and quality of life.