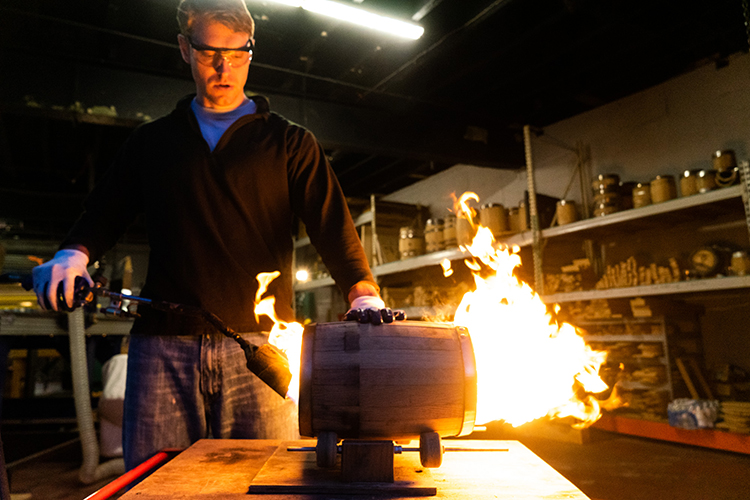 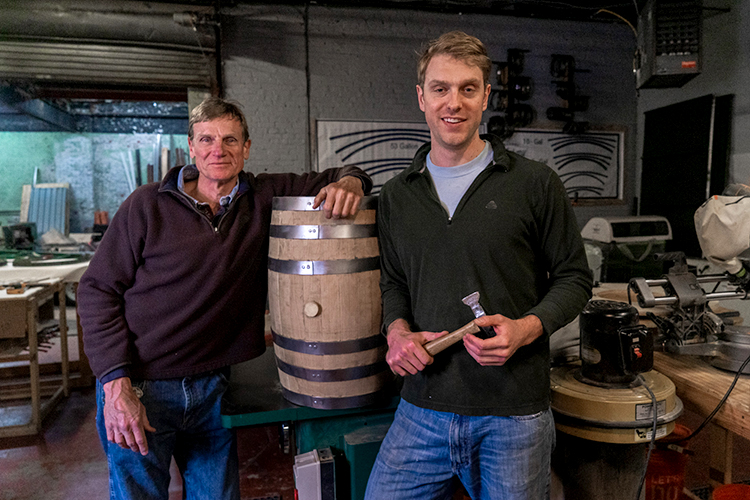 He and his father Jeff stand with a finished product. (Photo by Milton Lindsay) 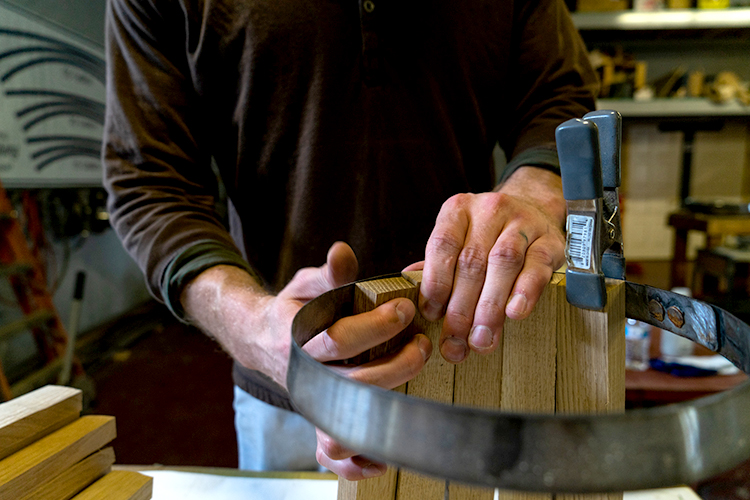 The Ebners fit staves together with hoops made of mild or stainless steel. (Photo by Milton Lindsay)

Ryan Ebner is a construction consultant by day and a cooper by night. In a rented workspace in West Philadelphia, shared with Ice Sculpture Philly, he and his father, Jeff, moonlight amongst smells of smoke and wood.

The father-son duo started Anthony Barrel Company in 2015 as a side hustle. Jeff  is a retired Volvo logistics engineer who commutes from Reading. His son Ryan lives in South Philadelphia. With two decades between them, they experiment with old and new methods for barrel-making. Their handiwork is intended for craft whiskey distillers.

For Ryan, whiskey-barrel making is a passion, and the wood brings him to life, as he shapes, chars and toasts.

“When I started working a desk job, there was no real access to hands-on problem solving,” he says, “so this fills that void.”

Ryan read a lot of books and watched a lot of YouTube videos to get started.

There is machinery that can make a whiskey barrel. But there’s nothing like engaging in the centuries-old tradition of woodworking. The 3- to 15-gallon barrels are made in small batches, using various tools and methods.

The intricacies were something Ryan wanted to figure out on his own, he says.

That includes the complex math used to fit a barrel together.

“It’s mostly just the arc of a curve—understanding how staves fit together,” he says.

The wood, mostly white oak, primarily comes from a mill in rural Pennsylvania.

The wood is air-dried for at least a year before it’s transported to the workshop. Then it becomes either staves, the body of the barrel, or heads, the pieces that fit on either end.

Once the staves and heads are cut and prepared, the Ebners fit them together with hoops made of mild or stainless steel. This is an assemblage called the “rose,” for its blooming look pre-bending. The barrel rose is then steamed and evenly winched. Then comes the dramatic part, Ryan’s favorite—the part with the fire.

Toasting is the process of helping the wood to caramelize by gently heating the barrel at temperatures of 300 to 450 Fahrenheit. Caramelization occurs around 320 degrees.

“From there you get more complex flavors,” says Ryan.

The Ebners’ toasting process takes about 45 minutes in total and occurs in a big, insulated barrel that functions like a wood pellet grill.

“Caramel, vanilla, the sweetness of it, comes from the barrel,” explains Ryan.

In fact, 50 to 80 percent of a whiskey’s flavor comes from the barrel alone, he says.

When charring, a process used more often for darker whiskey and smoother, richer flavors, the barrel is lit on fire using a propane torch.

“Charring is the most satisfying thing—you smell what it’s going to taste like,” he says.

They bag up the leftover white oak chips and take them to Urban Cowboys, the horse collective across the street, where they are used for bedding.

“The horses love it,” says Ryan. “It’s both convenient and sustainable.”

The coopers are toying with the idea of going larger, but the industrial sized 50-
gallon barrels require bigger machinery and more hands.

“I don’t know if I really want to go there,” Ryan says. “I don’t want to do big
cookie-cutter barrels.”

For him, as with most artisans, the satisfaction is in the craft itself.