A wildlife center for convalescing animals finds a new home

A brood of fledgling kestrels—America’s smallest falcons that are adorable even as adults—peer through the front of their cage, which sits at the top of shelves filled with animals on the mend. “These are ones we raised from fallen nestlings,” explains Michele Wellard, assistant director of the Philadelphia Metro Wildlife Center. Wellard is careful to make clear that fallen nestlings should be re-nested close to where they are found, if possible. “Much as we love raising birds, we want them to go back to their real parents, but when that’s not possible, they come here.” 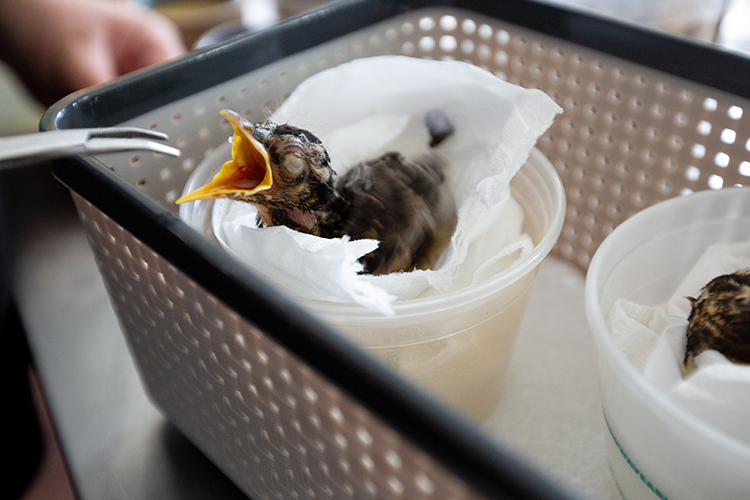 All sorts of animals wind up at the center. One shelf down from the kestrels, a litter of opossums peek out of their own cage as their mother sleeps; she had been wounded in a collision with a car. “It’s really common for a mother possum to get hit [by a car] and have a pouch full of babies,” says Wellard. In another cage pigeons flap about. They were nearly ready for release, but having come in as individual injured birds, they were being socialized so they could be discharged as a flock. A snapping turtle sits in a few inches of water in a plastic tub on the floor while its cracked shell heals.

On the other side of a doorway from the kestrels and their roommates, four volunteers prepare opossum food by mixing dog food with finely chopped vegetables. Their goal is to keep the patients from avoiding the vegetables. One volunteer, Maryann Navarro, has been with the center off and on since 1998. “I believe that if there’s no more wildlife, we’re not far behind as humans,” she says.

This room is otherwise filled with more cages, as well as an incubator housing nestling birds. Wellard opens the incubator and removes a box lined with a towel. The room immediately fills with the noise of harsh, incessant cheeping. Nestling chimney swifts cling to the side and clamor for mealworms that Wellard feeds them with forceps. “We get a lot of chimney swifts. They’re kind of a specialty of ours.” Their neighbors include an orphaned mockingbird and a fledgling robin that survived a cat attack.

Wellard cited cars and domestic cats as the leading hazards that land wild animals at the clinic, “but also accidental lawnmowering over baby rabbits… then you’ve got cruelty, kidnapping fledglings accidentally.” It is natural for birds leaving the nest to spend a few days on the ground, fed by their parents as they learn to fly, but not all caring humans realize that. Similarly, people are often alarmed to find nests of baby rabbits apparently abandoned, not knowing that rabbit mothers visit only briefly to nurse. “Normally most people call us first. Fifty percent of our work is done on the phone.”

Not all the animals make it. A great blue heron, a majestic wading bird with a five-foot wingspan, came in with one of its legs hanging by a shred of skin. Maggots swarmed in its wounds. Rick Schubert, the center’s executive director, restrained the bird’s foot-long beak while Wellard quickly found a vein in its wing and injected a sedative.

Schubert says they are able to release about 60 percent of the animals brought in, but that isn’t necessarily a failure for the 40 percent that, like the heron, have to be euthanized. “Every animal should get, and deserves, prompt, humane, appropriate care for that animal. So an animal comes in mangled by a cat, its intestines hanging out, that animal has a right to euthanasia. A success isn’t necessarily getting an animal released; the success is treating that animal for what it needs. Given that we are kind of on the front lines of a war against nature, the things we see are often not pretty. We get things that are mauled by cats, mauled by cars, [that have crashed] into buildings, shot, poisoned, caught in netting and things like that.”

Due to a recent split with their longtime organizational sponsor, the Schuylkill Center for Environmental Education, the center, like its patients, is in a temporary home. Finding a spot with enough space and proper zoning at the right price has been a challenge. In the meantime, the scrappy nonprofit will do what it can from a small building in King of Prussia. “…What humans do to wildlife [is] what we fix,” Schubert says. “It’s a sacred obligation we have to these animals, to right what’s been done wrong to them.”

At Philly Music Fest, the city’s diverse communities come together for four days of shows

I came to publishing magazines as a result of the intersection of three personality traits. First,

At Philly Music Fest, the city’s diverse communities come together for four days of shows

Philly Farm and Food Fest Relocates to the Navy Yard

In 2011, fair food decided to bring its mission of uniting local farmers with businesses and

A Center City tailor aims to heal our ailing wardrobes

As the old saying goes, what goes around comes around, and in the fashion industry, that