An entomological research project might bring to mind expeditions through far-away jungles or at least meadows out in the countryside. It probably doesn’t conjure up an Old City chocolate factory rooftop. But to reach this field site we walked into Shane Confectionery. From there we hiked up the stairs through one of the most delicious-smelling buildings in Philadelphia. We reached the fourth floor, ascended a ladder to the roof, and emerged to collect data.

Bee researcher Doug Sponsler, based out of Penn State’s Center for Pollinator Research, grew up in Philadelphia. He completed his doctorate at Ohio State University, but, “what I’ve always wanted to do is to come back to study plants and insects in the place I grew up and learned to love nature.” Beyond just wanting to come back home, Philly bee research offers a chance to investigate urban ecology, “the relationship between human land use in cities and the plants and animals that can coexist. Studying plants and pollinators gives you a really broad swath of the ecological relationships in the city.” 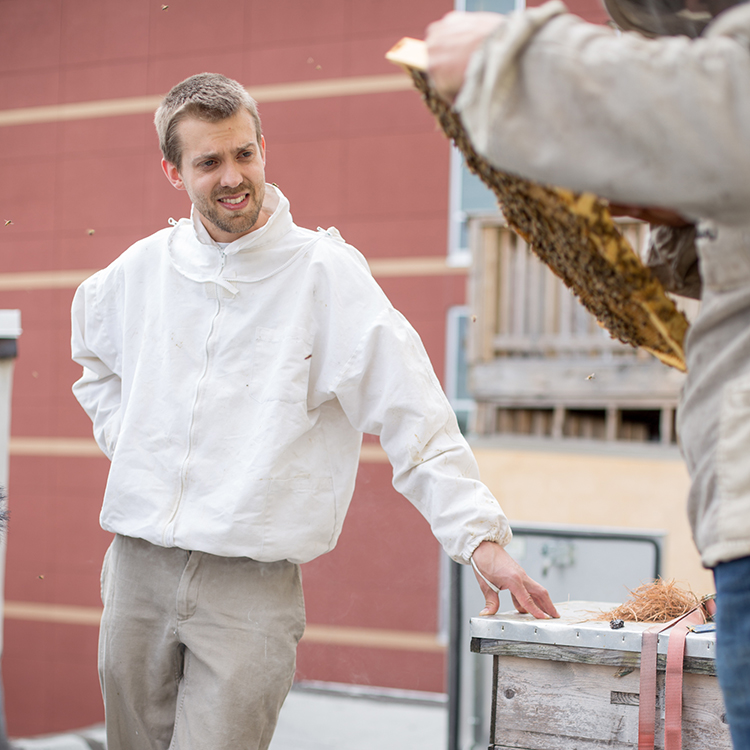 The apiary (a site with one or more bee hives) we visited is owned by the Philadelphia Bee Company, which, in addition to producing seasonal and regional varietal honeys, provides educational programming and removes problem bees and wasps, “anything that flies and stings,” said owner Don Shump, who handled the bees on our visit.

In addition to flying and stinging, you probably know bees for producing honey from nectar that they collect from flowers and then regurgitate back at the hive. They also gather pollen for food. Incidentally they spread that pollen around, which helps flowers produce fruit and the seeds inside.

Bees can also tell us about the plants they visit, and thus about the ecology of the 1.5 square miles or so that in which they forage.

“What we want to do is sample honeybee colonies and wild bee nests throughout the city, identify the plants used by the bees to produce the honey and pollen that we sample from them,” Sponsler explained, “and then try… to see if there are certain characteristic floral communities associated with different land use types, ultimately with the idea of being able give concrete recommendations to people, say, trying to decide what kind of street tree to plant or how to repurpose a vacant lot.”

Up on that Old City roof, Shump used a small pry bar to remove the roof of the hive and puffed some smoke at the bees to calm them. He then removed the vertical frames that the bees use to build cells for either storage or raising babies. Sponsler scraped some of the honey into test tubes for lab analysis. He also removed trays below the hives scattered with pollen pellets, looking like yellow or tan Nerd candies. Bees pack pollen into baskets on their legs, and Sponsler and Shump had installed special narrow hive entrances to force out the pollen as the bees squeezed through.

Back at the lab, Sponsler identifies pollen from those pellets as well as pollen removed from the honey. Some pollen gets mixed in with nectar that bees collect from flowers, which indicates the source of the honey.

Early observations have yielded some interesting findings. Some particularly dark honey collected from the Shane Confectionery roof last fall revealed Chinese elm pollen. These are wind-pollinated trees, so their flowers don’t produce nectar to attract insects such as bees. Where was the honey coming from? Sponsler’s leading hypothesis is that it’s not nectar the bees were gathering. Elm trees are commonly infested by aphids and other small insects that feed on their sap and produce droplets of “honey dew” as a byproduct. Bees collected that honey dew, a calorie source that got them through an otherwise slow season for local flowers.

“So we’re turning aphid pee into bee vomit,” Shump summarized. “Light went to die in this honey… it was like motor oil, but it was absolutely delicious. We did honey/chocolate tastings downstairs.”

Sponsler will learn more about Philadelphia bee/plant relationships as he conducts further analysis on the honey and pollen samples. He and Shump have also begun setting up bee hotels—blocks of wood with tubes drilled out to provide nests for native solitary bees—to learn about the relationships between other bee species and plants.

A city is full of interesting ecological relationships, but bees might be a particularly easy place to start.

“People tend to like bees, so it’s more accessible to the public,” Sponsler said. “We have something as beautiful as urban beekeeping on top of a chocolate factory in Old City where we get a chance to talk to people about plant/pollinator interactions.”

The first thing you notice about “Please Plant This Book,” a collection of poems by Francis

Access to Justice: A Case for Fair School Funding

Can the legal system improve the quality of public education? A  Pennsylvania Supreme Court case gives

Bike Talk: Slow Down on the Trails