Sweet Dreams: A quest to conquer the best in local gelato 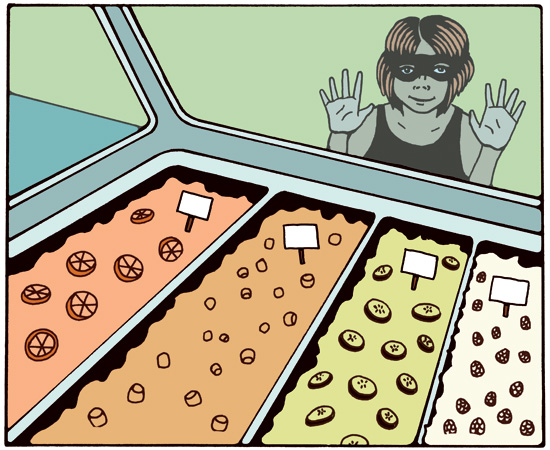 story by Jennifer Rezelli | contributions and edits by Summer RezeliThe inspiration for the great gelato caper naturally began during a trip to Italy with my twin brother, sister-in-law and niece. Among the highlights of our trip was a particularly rugged hike, during which my niece, who was nine years old at the time, discovered the restorative powers of a good gelato. Since then, I’ve always made an effort to visit one of Philadelphia’s fine gelaterias whenever my niece visits from her home in North Carolina. Each time, she samples one or two flavors before deciding. Wistfully, she then says, “One day I’m going to ask to sample every flavor. Can you imagine?”

After my son was born, I wanted to do something special to thank my niece for being a constant presence during my early motherhood days. And so, the idea for the Great Gelato Caper was hatched. I shared my idea with local food maven Lindsay Gilmour and she suggested The Bent Spoon in Princeton, N.J., which is known for phenomenal gelato and an owner with an oversized sense of fun. From there, friend and client Ann Karlen of Fair Food made an e-mail introduction. Soon, I had an eager co-conspirator.

On paper, the Great Gelato Caper looked straightforward enough. Step One: Find a top-notch gelateria with an owner willing to host the caper. Step Two: Tote unsuspecting niece to aforementioned gelateria to play out life goal of sampling every flavor of gelato in one sitting. Step Three: Covertly get owner Gabby Carbone’s attention to signal the start of the Caper. Step Three is where the plan started to unravel.

I had been warned the Bent Spoon is tiny and that even on a blustery Black Friday, a crush of gelato aficionados and hot chocolate seekers would pack the house. Even so, I was not prepared for what I saw when I snuck away from my window-shopping niece and stuck my head in the store. With only two tables and a large glass storefront, the shop was teeming with customers.

I was feeling somewhat sheepish for even thinking Gabby could entertain a time-consuming special request when crushed with honest-to-goodness customers. Soon, I realized the store would be busy all day, so I redoubled my efforts to complete Step Three. Not so covertly, I approached the counter and awkwardly waved my arms while yelping, “Gabby! Hey, Gabby!” Gabby looked over, confused. “It’s Jenn Rezeli,” I offered. “Um, it’s about the Gelato Caper.” Mercifully, Gabby caught right on and enthusiastically said that she’d been waiting for us.

While Gabby got us situated for our tasting, she insisted we start with a thick river of hot chocolate topped with hand-cut vanilla bean marshmallows. It wasn’t the only time during the Caper we felt like we’d stumbled into Willy Wonka’s factory. She then brought over the first two spoonfuls of her shop’s unique “artisanal ice cream,” an authentic vanilla bean that could stand on its own—no pie needed. Seventeen(!) flavors followed—each one hand-delivered by Gabby along with a story of what was local or otherwise special about the ingredients. It was clear Gabby was taking care to layer the flavors, starting with the more mild and working up to a robust Blackberry Passionfruit. While there wasn’t a miss in the entire group, we agreed our top picks were: Chocolate-Orange, Chocolate with Bourbon and Honey Pecans, and Cardamom Ginger.

Back in my kitchen that night, wearing the Bent Spoon T-shirt Gabby had secretly slipped into a bag of samples she insisted we take home, my niece began to consider spending four years at Princeton for easy access to her now-favorite gelato. The afternoon was a wonderful experience in human kindness and a reminder of why shopping locally is so rewarding. As we topped our Bourbon, Caramel and Sea Salt gelato with some chocolate-covered honey pecans, we savored the sweetness of our personal interaction with a creative entrepreneur, knowing that Gabby would applaud our push for the ultimate ice cream experience.

JENNIFER REZELI is co-founder and managing principal of Re:Vision Architecture (revisionarch.com), a green architecture and sustainable design consulting firm based in Philadelphia and Berkeley.

For years, yeast was a mystery to me. Though I grew up