In a Pickle: Former policeman embraces the art of fermentation 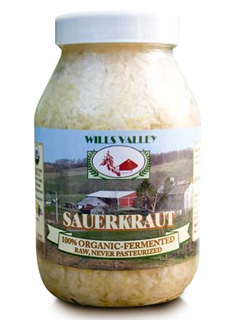 story by Dana HenryTom forrest, owner of Wills Valley & Forrest Acre Farm in Lancaster, maintains that sauerkraut, done right, doesn’t need refrigeration or a warehouse. “There’s not a whole lot of equipment that we use,” he explains of Wills Valley, his minimalist organic vegetable fermentation production. “We’re taking [the product] right out of the crock, putting it in a jar and putting a lid on it.”

Raw food fermentation, the art of processing using microorganisms, preserves fresh vegetables, dairy, and dried meats by enabling healthful bacterial strands and yeasts to break down food in the absence of oxygen. This process alters flavor and texture while increasing the available nutrient content. The aging process can take weeks – in some cases months – giving craft foods like cheeses, beer and chocolate distinct and subtle flavors.

Forrest, a former policeman, quit the force in 2000 at the age of 30 to start his first farm in Salem, N.J. He bought Wills Valley from Tim Bock, a Pennsylvania Dutch farmer and retired engineer, whom he had met at a farmers market. Bock, who began work at the farm by making sauerkraut from a family recipe, was ready to retire.

Acquiring an old-fashioned fermentation practice proved to be a solid business move, but also spoke to Forrest on a gut level. The traditional fermenting method is, in all likelihood, older than fire and is practiced by most native cultures. In recent years, fermentation has been popularized by food activists, including Sally Fallon (Nourishing Traditions) and Sandor Katz (Wild Fermentation and The Revolution Will Not Be Microwaved).

Forrest, an avid follower of Fallon and professional acquaintance of Katz, believes in traditional methods of processing foods, which do not include preservatives, stabilizers or refrigeration. When he brought the Wills Valley product to the Kutztown market, he found older patrons were nostalgic, recalling kraut-making as their first job. With current culture putting more focus on avoiding frozen and commercially-processed foods of the post-World War II era, Forrest sees his products playing an important role in both our culinary history and future.

Salad Days: Shower your greens with these delicious toppings

Salad Days: Shower your greens with these delicious toppings

story by Marisa McClellanOnce the growing season in the Philadelphia area kicks in, we get six

Straphanger Saving Our Cities and Ourselves From the Automobile by Taras Grescoe (Times, 336

Fool Me Twice: Fighting the Assault on Science in America