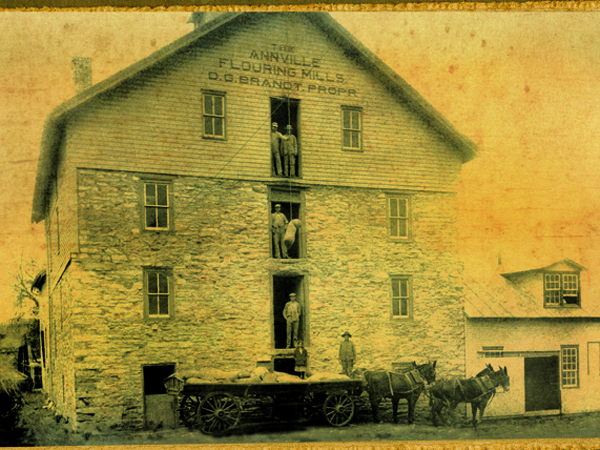 With the mill running, the whole building moves,” says Dave Poorbaugh, standing on the well-worn wooden floorboards of the 300-year-old Annville Mill in Lebanon County. “An old flour mill has a soul, because it moves. And when you walk in here, you’re part of it. You’re moving, whether you like it or not, so you become part of the machinery.”

It’s quite a feat to build the foundations of a business on equipment that’s over 100 years old, but Poorbaugh, head of McGeary Organics, will be more than happy to explain the myriad reasons why his company mills Daisy organic flour on roller-mills that were installed before the first World War. After even a brief conversation with this voracious history buff, it becomes clear that not only is the choice rational, but it stems from a deep passion for his area’s agricultural legacy and a desire to do things the old-fashioned way.

Daisy Flour—which is just one element of McGeary Organics’ business—is a brand that almost died, produced in a mill with nine (or more) lives. From the 1800s through 1982, Daisy Flour was the brand in Lancaster. “If you were a self-respecting housewife in Lancaster in the period, and you didn’t have Daisy Flour in your cupboard, you couldn’t operate,” insists Poorbaugh. It was milled at Lancaster Mill, an operation that McGeary eventually bought. When they closed down that mill, they held onto the Daisy brand.

Poorbaugh’s interest in organics began at a young age. When he was growing up in Quakertown, J.I. Rodale— publishing magnate and pioneer of the early organic movement—spent some time at his family’s kitchen table, chatting with Poorbaugh’s father, a vocational agriculture teacher. His uncle was a grain merchant, and he launched McGeary in 1952. The company always sold some natural products, but when the market for organics (especially local livestock feed) increased, they saw an opportunity. McGeary has now been certified organic for 14 years.

In 2000, McGeary decided to revive the Daisy brand as an organic product, and set out to find a local milling option that would work. They eventually settled on the nearby Annville Mill due to its segregated storage system, which enabled them to keep the organic flour separate from the conventional output.
Milling organic wheat was new for Annville. The former miller, Dave Brandt, practically grew up in the mill—he had been smelling and feeling flour there for 50 years. “The day that he started milling the first organic flour for us, he hadn’t been at it for an hour when he got so excited that called us up,” recalls Poorbaugh. “He said, ‘I can smell the difference between this flour and all the other flour I’ve milled. It smells so much fresher!’”

The mill itself (which McGeary bought from Brandt in 2002) is a special place. Built in the 1700s, it passed through the hands of some of the most powerful families in the Lancaster area—the Millers and the Herrs—before being acquired by the Brandts near the turn of this century. In 1907, David Groh Brandt overhauled the equipment. With the installation of roller-mills, Annville Mill was on the cutting edge of milling technology.

Those same roller-mills are still there, churning out flour. The basic process at Annville hasn’t changed in over 100 years. For head miller Dan Neufeld—a Kansas transplant from a family of millers—his ears are a vital tool. If the hum of the machinery changes even a little bit, he knows something is happening somewhere. When things do go wrong, it’s not always an easy fix. He can’t just pick up a catalog; new parts have to be custom-built by a blacksmith.

But this isn’t a museum; it’s a business. Beyond the charm of using a traditional, artisanal method, the milling process affects the way flour tastes, and behaves in recipes. The Annville Mill runs much slower and cooler than a contemporary, conventional mill—in fact, it still runs at the speed demanded, originally, by a water wheel. High speeds conversely create high heat, which actually toasts the wheat bit, leading to a different flavor and feel. Milling in small batches also makes a difference. “We make two to three truckloads of flour a week,” explains Poorbaugh. “A modern mill will make 20 to 30 loads a day.”

According to Poorbaugh, Daisy Pastry Flour, milled from locally-grown, organic soft wheat, makes a mean pie crust—with no cracks or fissures. And he’s not the only one loyal to the stuff. “A couple years ago, a lady came into the office and went around hugging and kissing everyone,” recalls Poorbaugh. “She must have been in her 70s. She had learned to bake from her grandmother when she was a young child, and had these old recipes that she couldn’t make anymore after we stopped making Daisy Flour, because the consistency of our flour is different from commercial flour. Now she could, so she brought us apple pies.”

Click here for Flour 101, a rundown on the differences between varieties of flour.

Co-ops are Ready For Their Close Up