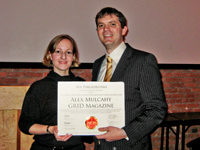 Amanda Weko, chair of the AIA Communications Committee, presents Grid with the Lewis Mumford Award for Architectural Journalism.One of my favorite things about being a member of the Sustainable Business Network is that, at the annual meeting, they offer a public forum for declaring your New Year’s resolutions. There’s nothing like making an announcement in front of a roomful of people—many of whom you’ll see the following year—to motivate you to keep your word.

In that spirit, I’ll commit a few of mine to print. First, I’m going to finally pick up my compost bin from Greenable and start composting. I will also buy as much food as possible from the Fair Food Farmstand; weatherize my home; and buy more used and less new.

I will be far from alone in making green resolutions—a recent study found that 51 percent of Americans already do. That’s a pretty impressive number. We asked a few Philly notables what they resolved to achieve in 2010, and when the calendar turns again, we’ll follow up and see how they’ve done.

I don’t think it can be stressed enough how important it is to “start with the man in the mirror,” or to “be the change you seek.” Setting an example is contagious. And when there are enough people who share the same values, real change can happen.

That’s why the co-op business model is such a powerful tool for community self-sufficiency. When profits aren’t siphoned away to corporate headquarters, and when people feel ownership in the places they patronize, the dividends are great. Philadelphia is fortunate to have such a robust example in Mt. Airy’s Weaver’s Way. They have provided the blueprint, and people in Elkins Park and Kensington hope to follow in their footsteps.

December was a thrilling month for Grid. We won the Lewis Mumford Award for Architectural Journalism from the Philly chapter of the American Institute of Architects, and shortly after that we were victorious in the Best Print Publication poll on Philebrity.com. Thanks to the AIA, Philebrity and the people who voted for us. Sustainability is such a fascinating and important topic, and covering it in Philadelphia is a joy and a privilege.

Speaking of the AIA, we have entered into a partnership with them. Each month, every book we review will be available in their bookstore at 1218 Arch Street. Together, we are going to hand-pick what we consider to be essential reading for the sustainability movement. We will keep you posted on our progress, but stop by their store and have a look for yourself.

A quick note of explanation regarding the dating of the magazine: Yes, this is a February issue with New Year’s resolutions in it. Over the past year, we’ve been trying to fit Grid into a crowded production schedule. (We also publish two other monthly magazines.) It took some shuffling, but we now have things pretty much worked out. The result is that Grid will street toward the middle of each month—January 13 this time around—and early rather than late. So, allow me to wish you a Happy New Year, Black History Month and Valentine’s Day!

Good advice from a family member gone too soon

We’re excellent collaborators, but what are we building?