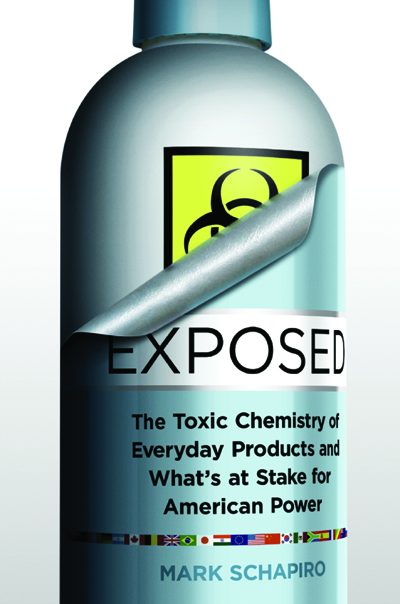 Exposed: the Toxic Chemistry of Everyday Products and What’s at Stake for American Power
by Mark Schapiro
Chelsea Green, $16.95

There has never been a shortage of books critiquing American government policy or society, but with the current economic crisis, such books now have a lot more cachet. Exposed, by Mark Schapiro, editorial director of the Center for Investigative Reporting, is an interesting mixture of two kinds of exposé: environmental dangers and global policy.

Schapiro looks at the dangerous chemicals in products like children’s toys and cosmetics, and dissects changes in international policy—with a major focus on the European Union—that seek to limit the use of such chemicals. One such group of chemicals is phthalates, which are used as plastic softeners in things like shower curtains and rubber ducks. Some evidence has suggested that exposure to phthalates can cause hormone and developmental problems in infant boys and could be causing, as one scientist said, “the feminization of infant boys.”

Throughout the book Schapiro hammers away how slow American government has reacted to evidence about toxic chemicals in consumer products, while the EU—which is then followed by other nations—has passed bans that have forced industries to reformulate their products. He argues that companies have started using the EU as their baseline for what they can put in their products, and if this continues, the US will see its global importance fall.