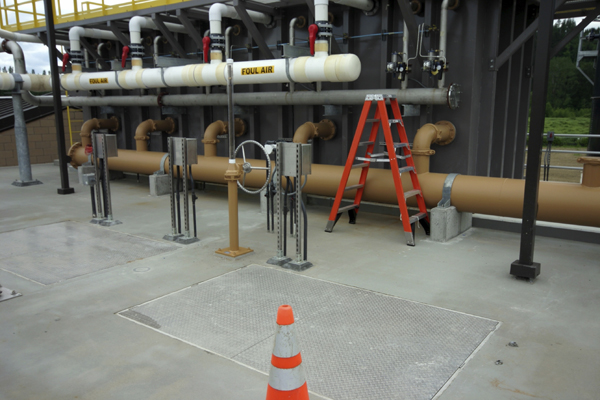 Biogas technology will save Philly some serious money

Biogas isn’t sexy. There are no sleek silver solar panels, no turbines on a windswept hill. It’s a part of your regular routine, but we’re only beginning to tap into its explosive potential. Biogas generation, the unmentionable alternative, uses methane, a potent greenhouse gas that comes from our garbage and our raw sewage, to power engines. It’s already used in the United States, and it’s sure to be an inexhaustible supply of energy—and bad jokes—for decades to come.

Alfred Wanner, a dairy farmer in nearby Narvon, PA, is reaping the benefits of the $1 million biogas system he installed in July 2007. Built with personal funds, as well as state and national energy grants, Wanner’s facility generates about 125 kilowatts each hour using purified methane from the manure of his 600 Holstein cows. The system powers much of his equipment and heats water to clean his milkhouse. By using the dried, solid byproduct as bedding for his herd and the liquid byproduct to fertilize his field, Wanner’s been able to switch to an electric sprayer and put two diesel-powered tractors to rest.

You don’t have to own cows to get energy from excrement, though. The Philadelphia Water Department has big plans to drop on the Northeast. According to Dr. Chris Crockett, Director of Planning and Research for the Water Department, the utility company will break ground on a $10 million biogas cogeneration facility at the Northeast Sewage Treatment Plant, one of Philly’s largest. It’s ripe with more than 188 million gallons of wastewater processed daily. They currently use seven to eight megawatts of energy to process the wastewater, but the new biogas facility, which should be cranking out power by early 2010, will run four one-megawatt generators, reducing the plant’s electricity usage by 50 percent.
The costly project got a boost from a $500,000 state energy grant. But Crockett said that if peak energy production is maintained, the facility could pay for itself in five years—that’s without factoring projected increases in power bills.

“We think it’s one of the best things to do and the right thing to do,” Crockett says. “Something we’ve been hoping to do for a long time.”
Currently, the Water Department flares off unused impure methane and pipes some of it back inside the plant to fuel the burners. Along the way, some methane invariably escapes. With the new biogas cogeneration facility, nearly all the methane produced at the Northeast Plant will be captured and piped over to a new mini-refinery, which will remove water, hydrogen sulfide, siloxanes and other impurities from the methane. The pure methane will power the four large new generators, producing electricity for the plant, and heat coming off the generators will be directed back to the digester tanks where the wastewater sludge is processed.

Besides cost savings and a reduced carbon footprint, Crockett says that the plant’s new methane-powered generators could act as an emergency backup system to help the plant “limp along” and keep treating wastewater during long power outages. Crockett is such a believer in wastewater’s potential that he calls it “black gold.”

“Theoretically,” he says, “wastewater contains 10 times more energy than the amount of energy we put into treating it.”

As the energy crisis deepens, renewable energy will continue to gain interest. We’ve already seen commercials touting the importance of alternative energy to save America’s environment and make us energy-independent. Soon, we may see ads urging us all to do our patriotic doo-duty and spend a little more time in the bathroom.