Cars and Jails: Dreams of Freedom, Realities of Debt and Prison with Andrew

Cars and Jails: Dreams of Freedom, Realities of Debt and Prison with Andrew 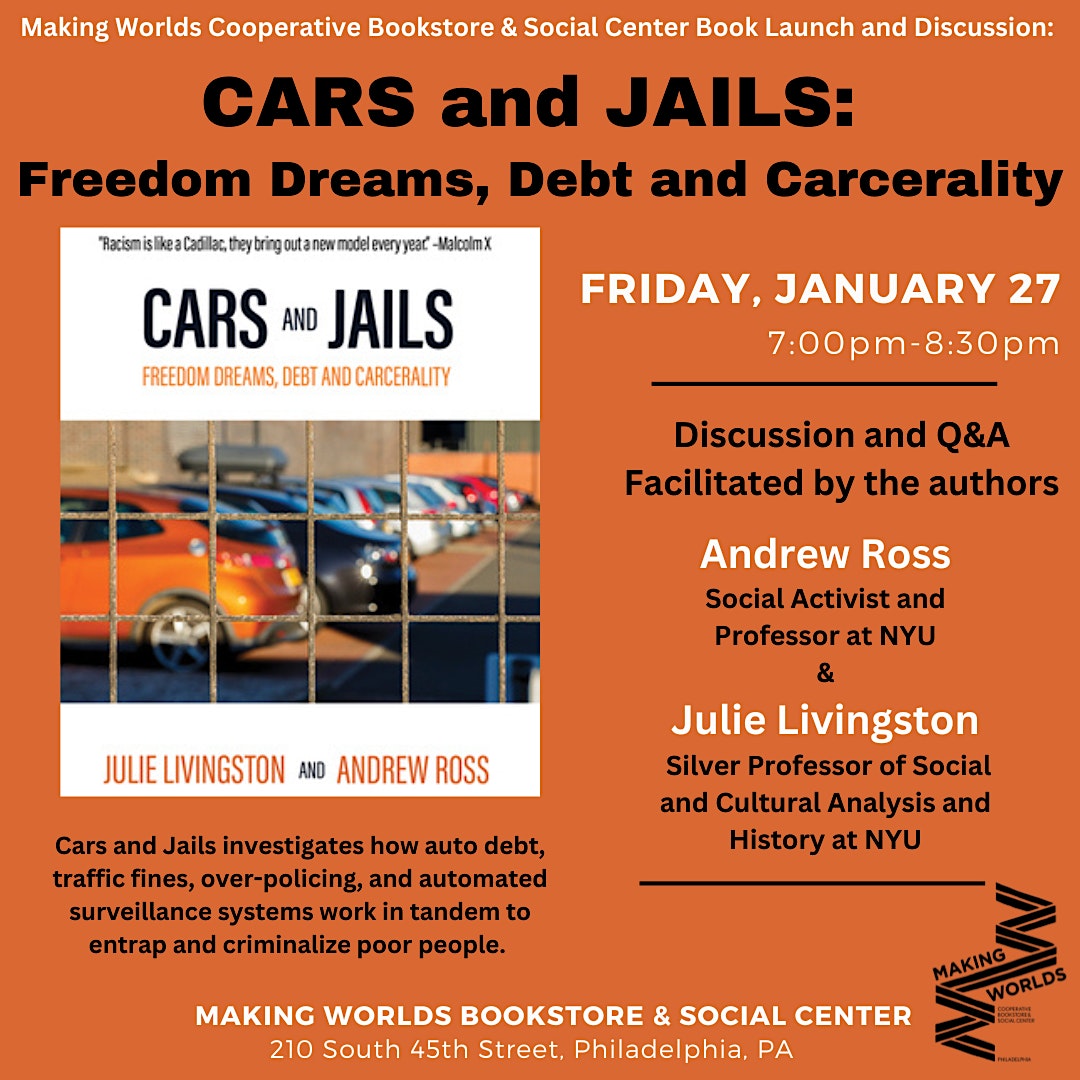 A discussion and Q&A of Cars and Jails which investigates how the car functions at the cross-roads of the debt economy and carceral state.

Cars and Jails: Dreams of Freedom, Realities of Debt and Prison with Andrew Ross and Julie Livingston

“Racism is like a Cadillac, they bring out a new model every year.”—Malcolm X (a former auto worker)

American consumer lore has long held the automobile to be a “freedom machine,” consecrating the mobility of a free people. Yet, paradoxically, the car also functions at the cross-roads of two great systems of entrapment and immobility- the American debt economy and the carceral state.

Cars and Jails investigates this paradox, showing how auto debt, traffic fines, over-policing, and automated surveillance systems work in tandem to entrap and criminalize poor people. The authors describe how racialization and poverty take their toll on populations with no alternative, in a country poorly served by public transport, to taking out loans for cars and exposing themselves to predatory and often racist policing.

Written in a lively, accessible fashion and drawing extensively on interviews with people who were formerly incarcerated, Cars and Jails examines how the costs of car ownership and use are deeply enmeshed with the U.S. prison system.

Looking skeptically at the frothy promises of the “mobility revolution,” Livingston and Ross close with thought-provoking ideas for a radical overhaul of transportation.

Andrew Ross is a social activist and professor at NYU, where he teaches in the Department of Social and Cultural Analysis and the Prison Education Program. Previously employed at Princeton University, he has held positions at Cornell, Rochester, Illinois and Shanghai universities. A native of Scotland, he has lived and worked in the U.S. since 1981, and in New York City since 1993. A contributor to the Guardian, the New York Times, The Nation, and Al Jazeera, he is the author or editor of more than twenty books and has published more than 200 articles in a variety of journals, magazines, and news outlets. He is a founding member of several movement groups, including the Gulf Labor Coalition, Decolonize This Place, Strike Debt, and the Debt Collective, and he is active in the Palestinian rights movement.

Julie Livingston is Silver Professor of Social and Cultural Analysis and History at New York University. Her previous books include Self-devouring Growth: a Planetary Parable as Told from Southern Africa; Improvising Medicine: An African Oncology Ward in an Emerging Cancer Epidemic; and Debility and the Moral Imagination in Botswana. The recipient of numerous awards and prizes, in 2013 Livingston was named a MacArthur Foundation Fellow. She is an active member of the NYU Prison Education Program Research Collective.