The Canadian high arctic is a great place to raise a family—if you’re a bird like the red knot.

Bugs are everywhere, and the summer sun stays up pretty much all day, which means you can eat nonstop. Thanks to the long and brutal winter, there isn’t much competition from other sorts of insect-eating animals like frogs and lizards. The key is having somewhere else to go when winter comes.

For the red knot, a robin-sized sandpiper, that place is on the other side of the planet, along the shores of southern South America.

“It’s an ideal lifestyle except for the commute,” says Dr. Jean Woods, volunteer and team leader with the Delaware Shorebird Project and former curator of birds at the Delaware Museum of Natural History. Flying 9,000 miles each way takes a lot out of a bird, so the red knot needs to take a break and refuel.

For red knots heading north in the spring, the shores of the Delaware Bay have been one of the most important rest stops—their final chance to eat before they take off for the last leg of the flight to their arctic breeding grounds.

Human marathon runners might snack on sugary gels or energy drinks, but red knots like horseshoe crab eggs. Horseshoe crabs, which are more closely related to arachnids than to crustaceans, look a little like a helmet with a long spike for a tail. Every spring the horseshoe crabs converge on the beach for a breeding aggregation. The lumbering females dig into the sand to lay their eggs, but in the process they dig up some of the eggs laid by previous females. So it goes until the sand is littered with crab eggs, a bounty for birds like the red knot.

Dr. Larry Niles, a wildlife biologist involved with horseshoe crab conservation advocacy, recalls the scene on the sand in the 1980s when he was taking part in shorebird research.

“There were actual piles of eggs on the sand,” he says.

Those piles made it easy for red knots to eat their fill.

According to the Horseshoe Crab Recovery Coalition, horseshoe crabs weren’t heavily caught for anything besides hog feed and fertilizer up until the 1970s, when synthetic fertilizers became popular, relieving the pressure on the crabs. In the 1990s, though, they became popular as bait for animals that people like to eat, such as crabs and conch (a marine snail).

Populations crashed as a result of intense harvesting.

Along with their use as bait, humans catch horseshoe crabs for their blood, which contains a chemical called Limulus amebocyte lysate (LAL), useful in testing pharmaceutical products for bacterial contamination. The result is an industry in which fishers catch female horseshoe crabs (the females are larger than the males) to be bled and then return them to the water. Government regulators assume that 5% of bled crabs do not survive after release, but that rate might be as high as 20%.

Around the same time that horseshoe crab populations were falling, red knot numbers saw a steep decline, so much so that the U.S. Fish and Wildlife Service listed red knots as threatened under the Endangered Species Act in 2014.

“Their populations went way down in the late 1990s and early 2000s. 2005 was about the bottom,” Woods says. “There was a lot of action at that point in terms of limiting the harvest of horseshoe crabs and numbers came back up.”

Woods mentions several reasons red knot numbers declined, including recreational use of beaches scaring them away. The reduction in Delaware Bay horseshoe crab eggs seems to stand out as a major cause.

The horseshoe crab industry is regulated by the Atlantic States Marine Fisheries Commission, which sets limits for their use for bait as well as for the biomedical industry. How well the commission does its job is a matter of debate.

Niles and the Horseshoe Crab Recovery Coalition argue that the commission sets fishing targets that keep the horseshoe crab population too low to provide the abundance of eggs needed to feed red knots, not to mention aquatic life that feasts on the eggs washed into the sea. The coalition argues for lower horseshoe crab catch targets, along with habitat preservation and more attention to how the crabs are killed as bycatch when people fish for other species.

They also argue for increased use of a synthetic LAL alternative in drug manufacturing, which is already approved for use in Europe, Japan and China.

Due to global warming, more horseshoe crab eggs might not be enough to save the red knots, Wood says. Rising seas will cover the beaches the horseshoe crabs and red knots currently depend on. And as the poles heat up, their breeding and wintering grounds will change as well. 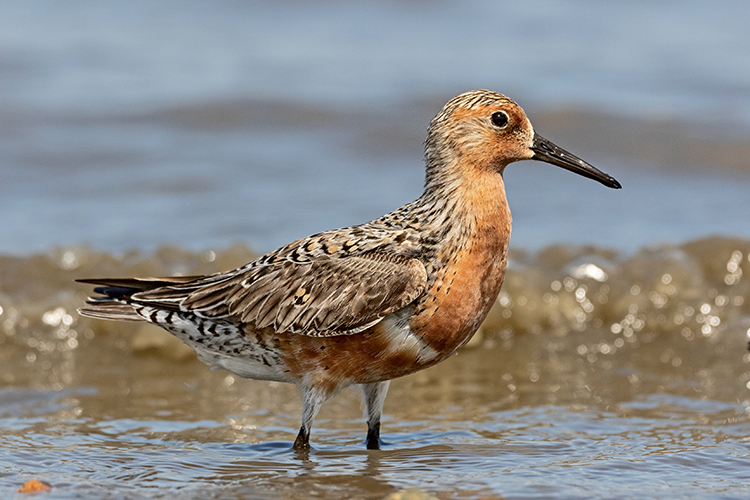 Horseshoe crabs breed based on water temperature and wave action, Woods says, and relatively cold temperatures and heavy storms meant that the birds showed up and didn’t find very many eggs to eat. In 2021 conditions were better, but red knot numbers didn’t bounce back.

“Some people have interpreted this to mean numbers crashed,” Wood says. “They might be more resilient than that, though.”

To Greg Trainor, executive director of Philly Reclaim, deconstruction is a no-brainer. An environmentally-friendlier alternative to

The nickname “B” has followed Yasmeen Brown around most of her life. She also happens to