A cryptic species of leopard frog escaped detection until 2012

At the first hint of spring in March, thousands of voices ring out from our ponds and wetlands. It might still feel chilly to human skin, but the thawing ground and lengthening days tell hordes of frogs that life is returning to the earth.

Each male wood frog, spring peeper and leopard frog finds a good spot to sing from and begins the performance, fighting off rivals while trying to win the attention of a female, thick with eggs, that he can fertilize.

It took until 2012 to recognize that one of these spring voices belonged to a cryptic species—one that appears (to human eyes and ears) so similar to others that we didn’t realize it was distinct.

Meet the Atlantic Coast leopard frog. Tan with round spots and a generic frog shape, you—and lots of herpetologists (scientists who study reptiles and amphibians)—could be excused for mixing it up with the southern leopard frog, a species that looks almost identical and whose range reaches from the Deep South to the New Jersey Pine Barrens. 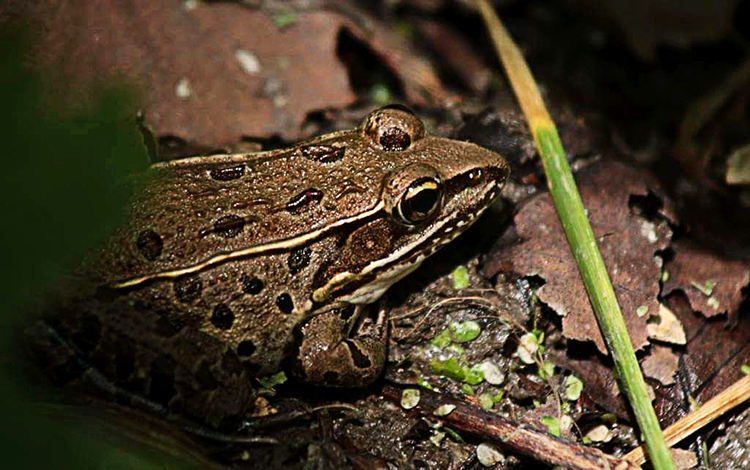 Of course, frogs care less about looks than they do about sounds. 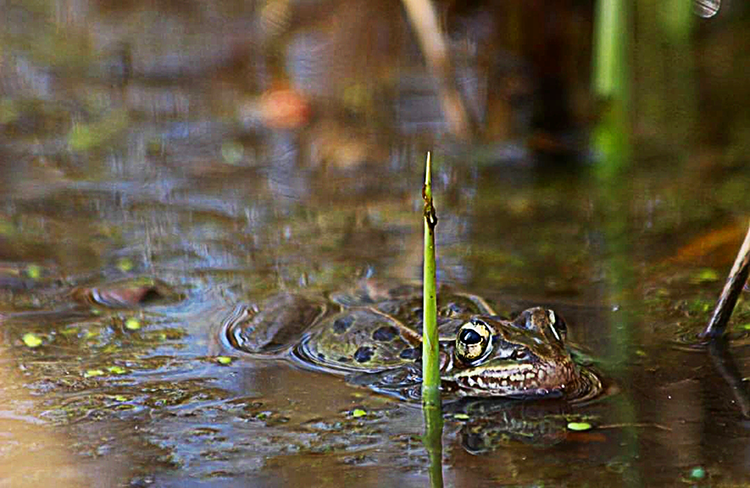 Male southern leopard frogs sing with what to our ears sound like bursts of high-pitched chuckles mixed with slower, lower snores. The Atlantic Coast species uses lower and slightly longer individual chucks and not as many snores, and it sings earlier in the spring—at the same time as the nearly-identical sounding wood frog.

The frogs can tell each other apart, but I was one of the naturalists who mixed them up. There are citizen science projects, known as frog call surveys, where listeners document the frogs they hear calling as a way to monitor their populations. I took part in multiple frog call studies in the 2000s, and I recall marking down wood frogs in places where, when I later thought about it, no one had ever seen a wood frog.

“Your experience is very common … ,” Jeremy Feinberg, research collaborator at the Smithsonian Institution, tells me.

Feinberg, along with a team of researchers, figured out that there was a yet-unidentified species of frog living along the I-95 corridor, which they described in two scientific journal articles in 2012 and 2014.

Some earlier observers had their suspicions, too.

For example, the prominent herpetologist Carl Kauffeld tried to reorganize the leopard frog species in 1933 but his proposals didn’t catch on and don’t exactly fit the variation that Feinberg ultimately documented 80 years later. More recently Ned Gilmore, vertebrate collections manager at the Academy of Natural Sciences, who lives in South Jersey, says he had long noticed that the leopard frogs “along the river are different than the ones in the Pine Barrens.”

As a graduate student Feinberg was studying the decline of leopard frogs in the New York City area. He found that apparently pristine wetlands in places like the eastern end of Long Island were leopard frog-free, but highly degraded marshes in Staten Island, the New Jersey Meadowlands and other urban locations still had them. A closer look at the acoustics, genetics and finer physical points revealed that these urban leopard frogs were a distinct species.

It’s unclear why the Atlantic Coast leopard frog has hung on while other species have declined in the Mid-Atlantic. Wetlands have been under assault from invasive plant species, development and centuries of pollution.

Frogs have also been victims of disease globalization, as humans have spread frog pathogens to populations that had not evolved resistance to them. Feinberg’s best guess is that the vast marshes of the New York area as well as the Delaware Bay provide enough habitat for the Atlantic Coast leopard frogs to hang on. Even if a lot of them get killed off, a few survivors from another corner of habitat can then reestablish the population.

This month you can listen to Atlantic Coast leopard frogs in any of our big tidal wetlands, from Bucks County down to Wilmington, and across the river in South Jersey.

Pick a wet evening, find a safe spot to park and enjoy the concert. Organized frog call surveys, like the Frog Watch organized by the Philadelphia Zoo and the John Heinz National Wildlife Refuge at Tinicum, offer a structured way to take part, with experts to help you figure out what you’re hearing.

Budget cuts have shuttered school libraries for decades. A young English teacher has built one from scratch