Virtual learning may not seem optimal for interacting with the natural world, but for the teenagers in the Philadelphia Watershed Stewardship Program, digital instruction has been a source of empowerment.

Now in its fourth year, the program has more stewards than ever before. Students from more than 40 high schools applied to the program to learn about watershed issues and to become advocates and changemakers.

In previous years, the stewardship program, created by a partnership between nonprofit LandHealth Institute and the Philadelphia Water Department, has been almost entirely hands-on.

Stewards have collected more than 600 pounds of trash around Cobbs Creek, operated the water department’s underwater rover to document unique environmental challenges in Naylors Run, and marked storm drains throughout Philadelphia. Now that the program has shifted to an online format, activities have changed, but the focus of the program has remained the same.

“This year, we didn’t want to stop the program. We share videos with them that I shoot—videos of parts of Philadelphia. They can take virtual field trips and [participate in] interactive weekly Zoom sessions,” says Scott Quitel, founder and CEO of LandHealth Institute.

The first half of the program focuses on the ecosystem around Cobbs Creek. Stewards learn about stormwater runoff, local animal and plant life and the challenges of the combined sewer system. In the second half, stewards expand their focus to other parts of Philadelphia, as well as the surrounding area. As they gain knowledge, they gain the chance to share their experience and expertise with their surrounding community. Stewardship is the true focus of the program.

“Our program’s not about becoming a scientist. Our program is about empowerment. We need knowledgeable stewards. We teach them how to teach others,” Quitel says.

One of the best ways to learn and teach is by forming connections. Quitel has emphasized this by reaching out to various groups with a similar focus on water and ecology.

“If there’s something watershed related going on, we try to connect them with that. It opens up doors,” Quitel says.

This year Quitel connected the stewards with Villanova professor Hezekiah Lewis and several Villanova students who participated in the filming of the documentary “From the Ground Up,” created by student production company Glass Rose Films. The documentary focuses on the unequal access to clean water in the Singida region of Tanzania. The stewards viewed the documentary and discussed it with Lewis and the student filmmakers.

Watershed steward and 17-year-old high school student Owen Moss believes the film’s “unusual style” gives the residents of Tanzania their own voice. In the documentary, there is no narration or talking heads. Rather than taking an outsider perspective, the film observes without taking a stance.

“The students were not there to give those people a voice,” Moss says. “They’ve already got a voice. Instead the film acts as sort of an amplifier.” The filmmakers “may be holding the microphone, but they’re not speaking into it.”

Moss believes working as a steward is also a form of amplification. It is about advocating for change by giving people a chance to speak for themselves.

The difference between clean water access in Philadelphia and Tanzania was also a part of the discussion between the stewards and the Villanova filmmakers. Many stewards were shocked to learn how much effort it takes to gather clean water in Tanzania.

“It makes you think about how lucky you are to have running water,” steward and 17-year-old high school student Imani Mitchell says.  Mitchell joined the Philadelphia Watershed Stewardship Program with her twin sister Nia.

In previous years, the stewards interacted with neighbors and community members at in-person events. Although their interactions have shifted to a digital platform, their community building has not stopped.

“Before COVID-19, we used to go into the community, give out flyers, and host events at the Cobbs Creek Community [Environmental] Center, but we still are communicating with others,” Imani says.

Through this communication, the stewards are able to share what they know, which is a central tenet of stewardship.

“Giving kids a chance to practice talking to other people about things they’ve learned not only helps solidify what you know, but it also [is part] of being an advocate,” Liza Herzog, executive director of LandHealth Institute, says.

Another form of communication—writing—is an important part of the Philadelphia Watershed Stewardship Program. Stewards are encouraged to write poetry, draw sketches and express their thoughts in their journals. In the first year of the program, the stewards’ journal entries were compiled to create a field guide for Cobbs Creek, which was printed and distributed.

By making use of their online medium, the stewards found a new way to write. They created plastic-themed poetry in groups via Zoom, which can be found on the LandHealth Institute website. Moss and the Mitchell sisters assisted in leading the writing sessions.

The activity served as a challenging icebreaker for the stewards due to the large group of participants.

“It was a very good way for us to connect,” Nia says.

“Leading a group writing session virtually was new to me,” Imani says. Though “the program’s group is big this year and we could not meet in person, we became closer.” 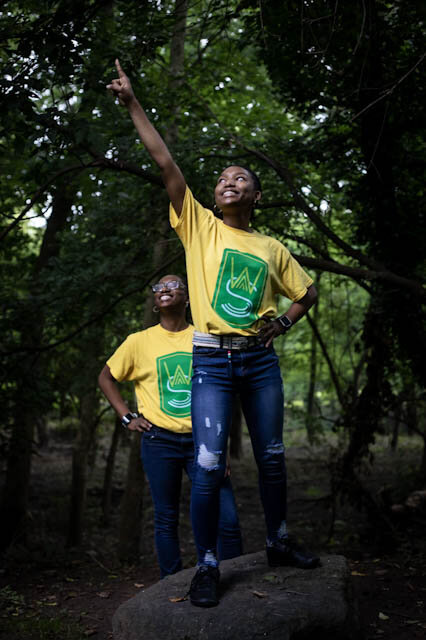 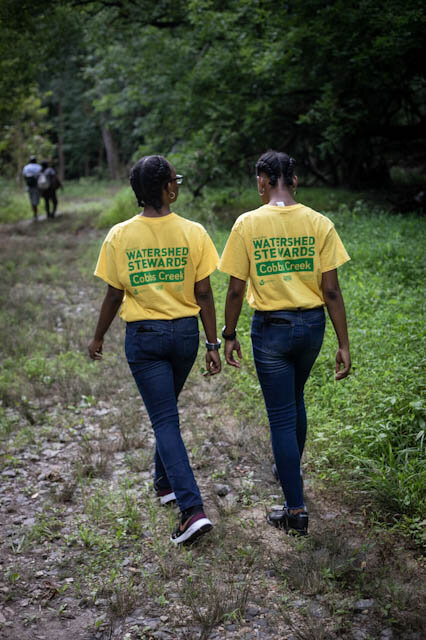 The focus of the program has not left Cobbs Creek, but it has widened in scope, highlighting environmental challenges Philadelphians face, regardless of neighborhood.

“Philadelphia has a long legacy of poor planning and mismanagement of land,” Moss says. “Many parts of Philadelphia have less than 10 percent tree canopy. Planting more trees can save hundreds of lives every year.”

Moss points to a recent study published in “The Lancet Public Health” that estimates that more than 400 premature deaths could be prevented annually in Philadelphia if the city were able to increase tree canopy cover to 30 percent. (See pg. 12 for more.)

Another environmental challenge caused by old city planning is combined sewer overflows, which occur during heavy rains. Most of Philadelphia operates on a combined sewer system, which means that stormwater and wastewater flow through the same pipes. To avoid overwhelming treatment plants during heavy rains, the combined stormwater and wastewater is diverted directly into local creeks and streams.

“Our sewer system is one of our major problems,” Nia says.

She believes the sewer system and lack of tree coverage across the city are environmental challenges that affect all stewards. The greater number of stewards in the stewardship program “hasn’t really affected our main focus. [Stewards] may be from separate areas, but they all face the same negative impact humans have on the environment,” Nia says.

Quitel considers the program to be most effective when it focuses on the entire city.

“Why not just do it at every watershed? We’re expanding the content we offer to accommodate anybody, anywhere,” Quitel says.

As the summer goes on, the stewards plan to take part in a few outdoor activities, including canoeing at Glen Foerd on the Delaware and cycling through West
Philadelphia.

By social distancing outdoors, the stewards will be able to continue some of their hands-on learning. They will also continue to communicate with community members and groups with a common focus on the environment.

“We’re not doing anything huge, but we’re driven to help in every way we can,” Moss says. “Even though we’re just kids, we understand that we’re advocates and agents of change.”

Springboard builds relationships between parents and teachers virtually during pandemic

Elizabette Andrade grew up in the kitchen. In her household, you weren’t given a cookbook—you were